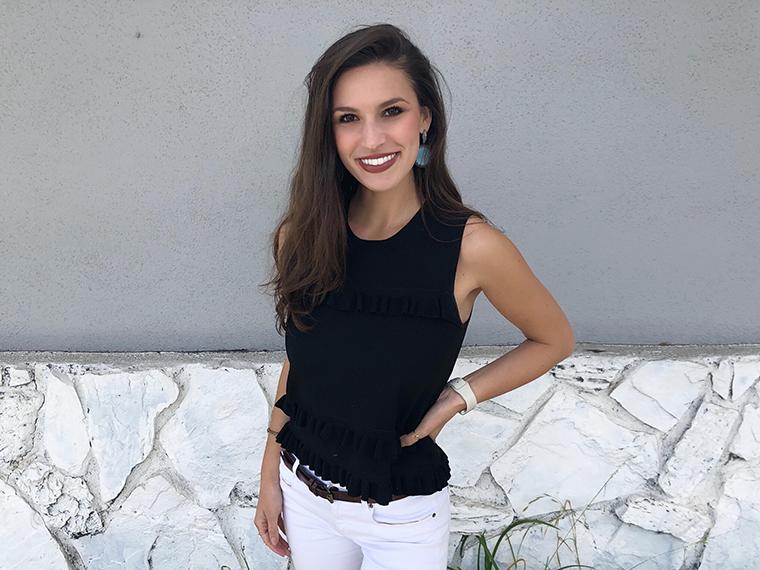 Dickinson’s liberal-arts education gave Olivia Zoratto ’18 the flexibility to pursue a self-developed film studies major that was instrumental in quickly launching a successful career in the entertainment industry.

When I was at Dickinson, I created and pursued a self-developed film studies major. The creation of my major was instrumental in allowing me to work in the entertainment industry, for immediately following graduation I landed two jobs in Los Angeles—one working on set of a major motion picture and the other as an executive assistant to one of the top agents at Innovative Artists, one of the top 10 talent agencies in the industry. My major and liberal-arts education provided me the necessary skills and knowledge to approach the film industry from both the creative and business side, making me an incredibly well-rounded and invaluable asset to the business.

My favorite organization was being a part of Pi Beta Phi. Pi Phi not only gave me lifelong friends, but it also taught me how amazing it is when a group of women come together to support each other and aim to make positive changes in the world.

My greatest memories at Dickinson were the months I spent creating my film studies major, because all the work brought me to where I am now. For this, I would like to thank Associate Professor of Italian and Film Studies Nicoletta Marini-Maio and Associate Professor of Spanish Margaret Frohlich for their help and dedication to making my major possible.

Since graduation, I keep in close contact with the friends I’ve made at Dickinson. I also like to keep in touch with some of my professors by updating them on my life and career from time to time. I believe it’s important to maintain the relationships I’ve made throughout my years, for these are the people who’ve watched me grow as a student and individual. The relationships I’ve made there are ones I will remember forever.

I’ve always had an appreciation for the entertainment industry. I grew up in Pittsburgh, which is an up-and-coming city for film and television. I have a lot of friends and family in the film industry, and I also signed and worked with Docherty Agency, a modeling and talent agency in Pittsburgh, while I was in high school. During the summer after my junior year of college, I interned at Nancy Mosser Casting, the top casting agency in Pittsburgh. Additionally, I did an externship at United Talent Agency (another top talent agency in LA) through Dickinson’s externship program during my senior year. Collectively, all these experiences further solidified why I wanted to work in the film industry. To me, the most exciting part of working in film and entertainment is that it’s an ever-changing business. The entertainment industry is always molding to societal configurations to reflect the current times. Film and television content are always changing, production is advancing and every day is something different. Whether you work on the creative or business side of the industry, not one day will be the same.

After graduation, I secured two jobs in Los Angeles. First, I worked as a production assistant on the set of a major motion picture, Against All Enemies, a political thriller starring Kristen Stewart, Vince Vaughn, Anthony Mackie and others. I worked closely with the directors, producers, cast and all other members of the crew. I also helped with setting up shots, managing background talent, locking up locations of set and assuring the cast was wired and prepared for filming.

Following the film, I was hired full-time to begin working at one of the top talent and literary agencies in the industry, Innovative Artists, where I currently work. The company’s impressive list of clientele includes some of the most successful and high-profile actors, comedians, hosts, writers, producers and directors in the industry. My position is the assistant to the head of the Department of Broadcasting, Sports and Alternative TV. Here, I manage and oversee my boss’s entire schedule and help edit client contracts. I work directly with all our clients, production companies and networks. I coordinate our clients' meetings, oversee their schedules when traveling, submit them for projects and roles, write pitches for them and help them with their materials (such as demo reels, resumes, etc.), and much more.

My biggest challenge at work would be the challenges that I place upon myself to excel at my job. I am always looking to grow as an individual and learn all that I can.

If I could choose anyone to have dinner with, it would be Robin Williams. Not only was he an incredibly talented performer, but he has always been someone I’ve deeply admired as an artist. He had the ability to play any role he was given, and he always aimed to make the audience laugh—despite any struggles of his own. In my opinion, he was truly one of the greatest performers of all time.

Definitely not to the future—I want my future to be a surprise and see where life takes me. If I had to pick, I would travel back to when my grandmother was my age and spend time with her. She is one of the most amazing women I know, and I would be lucky to do so.

Absolutely nothing. I believe that everything I have gone through and worked for throughout my life has brought me to where I am now. I have an extremely supportive, loving and close family and a great group of friends. I love my job and my new home in Los Angeles. I wouldn’t change anything for the world.