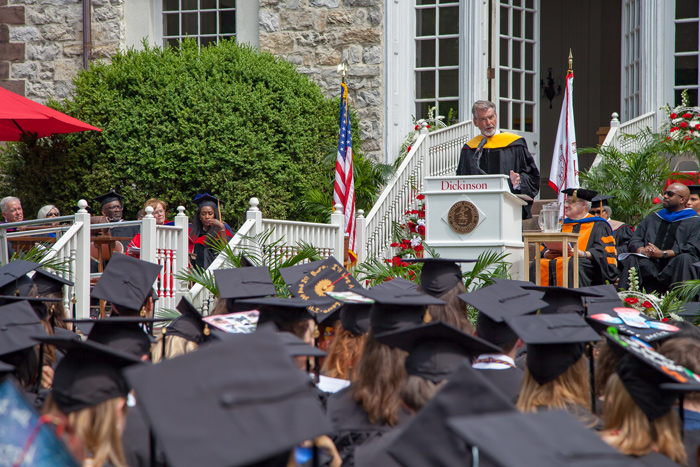 Dickinson celebrates the graduation of its largest class ever

"I have worn the tuxedo, so I can tell you this: Our world doesn't need you to chase the super-spy lifestyle," said Brosnan, known in part for playing James Bond in four films. "When you leave here today, I urge you to pursue something that is as exciting to you as it is important to the world." 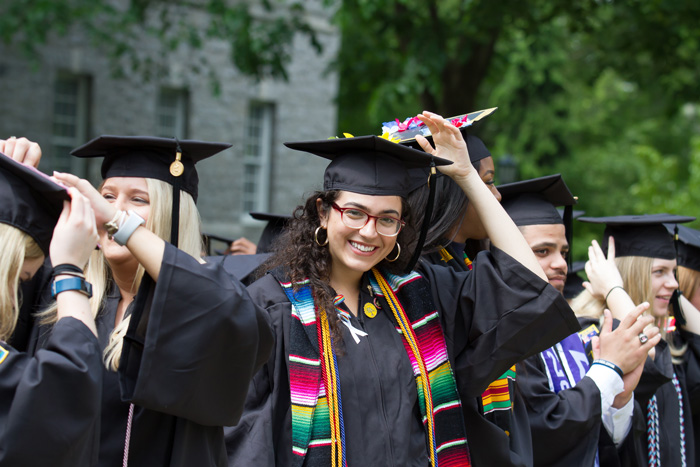 Associate Professor of English Claire Seiler earned the college's Constance and Rose Ganoe Memorial Award for Inspirational Teaching. Presented each year, the honor is determined by a secret-ballot vote conducted by members of the graduating class. Professor of Anthropology Ann Hill won the Distinguished Teaching Award. 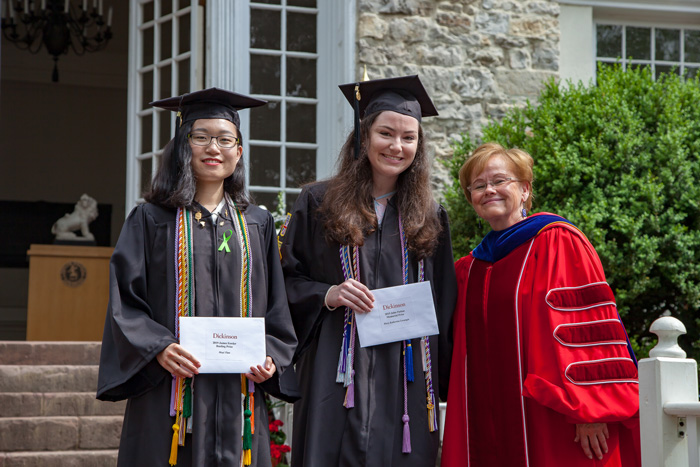 The Hufstader Senior Prizes, which are awarded annually to two graduating seniors who, in the judgment of the college president, have made the greatest contributions to the good of the college, were awarded to John Adeniran ’19 and Olivia Termini ’19. 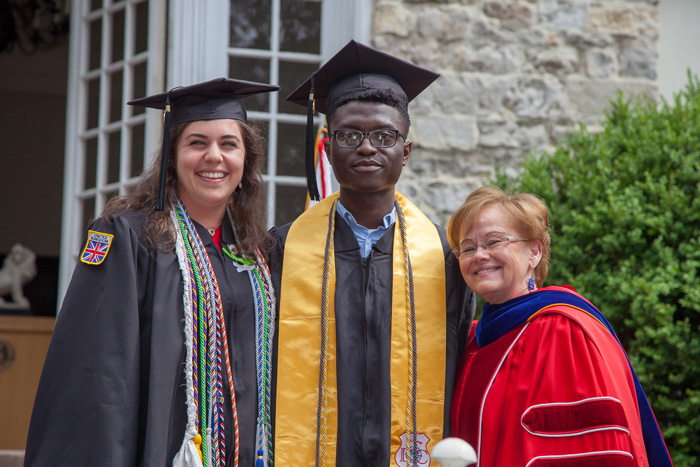 Adeniran was a co-student leader of the MANdatory program and a member of Scroll & Key. He led bible study groups in the Dickinson Christian Fellowship, served as an emerging leaders’ mentor, was a member of the first-place 2018 innovation competition team, held  several jobs across campus and was recently named “student leader of the year” by the Office of Student Leadership & Campus Engagement.

Sarah Nash ’19 was named the new Young Alumni Trustee. During each Commencement since 2011, Dickinson’s Board of Trustees has chosen a Young Alumni Trustee from among nominated seniors to represent young alumni on the board and serve a two-year term. 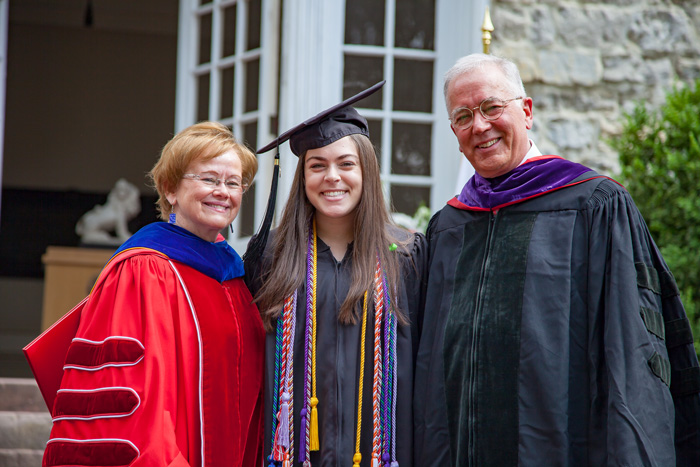 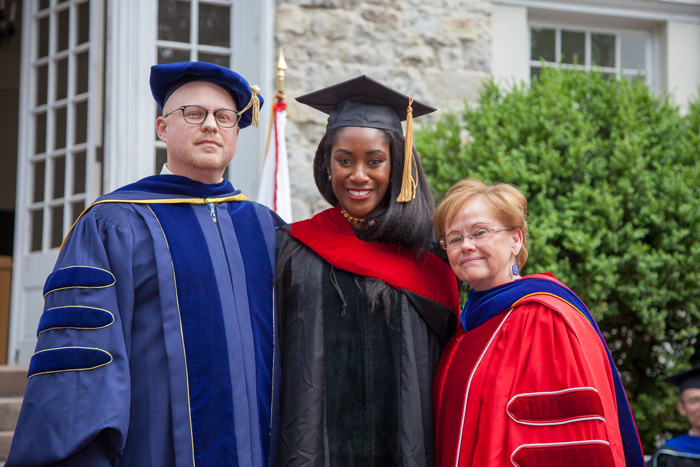 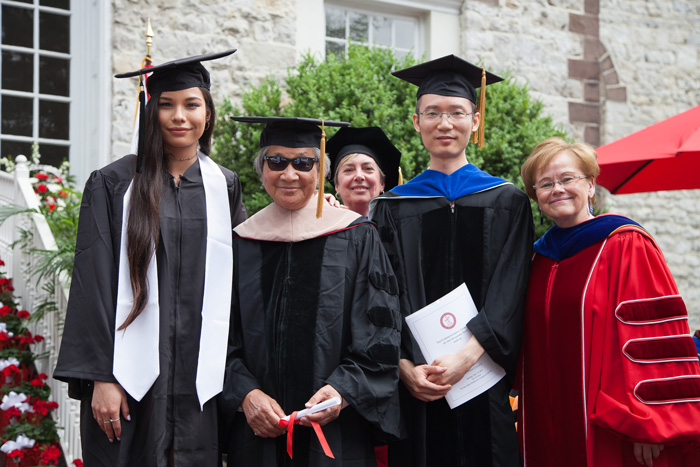 This year's Rose-Walters Prize went to the Natural Resources Defense Council (NRDC) in recognition of its work defending America’s wildlands, including the Arctic National Refuge, Bristol Bay in Alaska and the monuments of the West. Brosnan and NRDC Western Director and Senior Attorney Joel Reynolds accepted the prize on behalf of the international environmental advocacy organization. 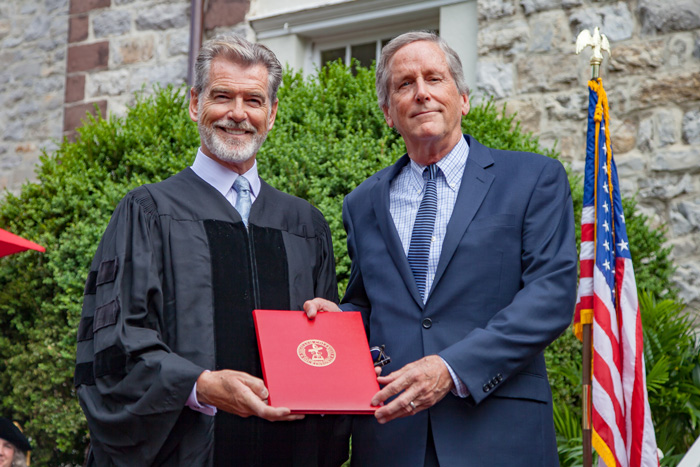 Pierce Brosnan and NRDC Western Director and Senior Attorney Joel Reynolds accept the Rose-Walters Prize on behalf of the NRDC.

"It is an inspirational and well-earned recognition," said Brosnan. "A prize generously created to support the noblest of work."

The college also awarded posthumous degrees to two members of the class of 2019, Jigme Nidup ’19 and Lauren Lau ’19.

Following a long-held college tradition, the Commencement ceremonies ended with the graduates walking down Old West’s "old stone steps" to complete the journey they began four years ago by walking up those steps to sign in to the college. "You follow generations of Dickinsonians spanning more than two centuries to proceed down these steps to your new lives," said Dickinson President Margee Ensign who presided over the ceremonies. 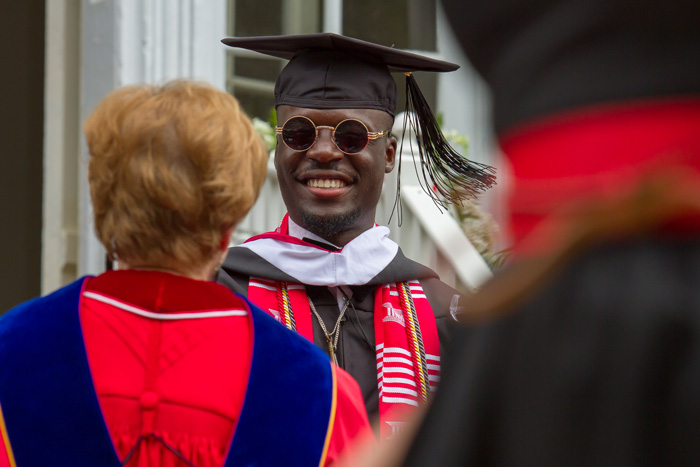