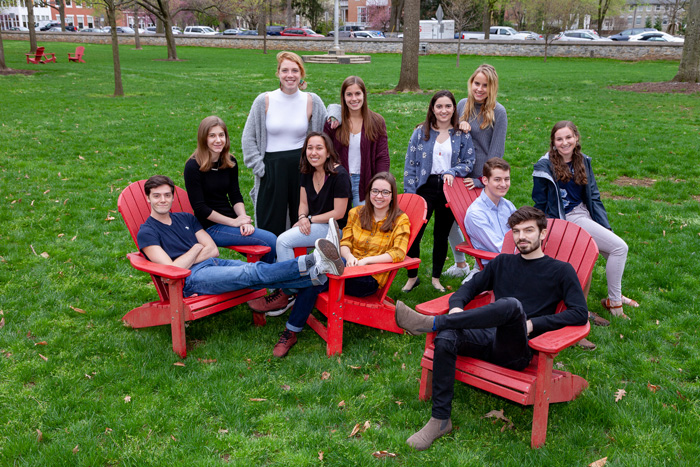 In the last decade, the U.S. Department of State’ Bureau of Educational and Cultural Affairs has recognized Dickinson as a top Fulbright-producing college seven times, with two dozen students and alumni over the last five years earning Fulbright awards.

This year, with 13 awardees and 20 semifinalists—the most ever on both counts—it’s a safe bet that Dickinson’s Fulbright success will once again garner State Department recognition. And as recipients say year after year, when individuals are honored with awards such as a Fulbright, they find that the Dickinson community has been standing firmly behind them the entire way through.

“My faculty panelists, Profs. Maria Bruno and James McMenamin, were very helpful in offering criticism from different perspectives,” says Marc Morris ’19 (archaeology), one of 12 seniors awarded Fulbrights this year, noting that the research he’s done made him a stronger candidate. “I may have had a strong application from the start, but it would not have been as strong as it ended up being were it not for all of their criticism and support.”

Morris will go to the Netherlands as a research fellow, where he’ll focus on Iron Age southern Italy—and, of course, on learning Dutch. For Frances Youmans ’19 (English, German), who’s off to Germany in the fall, it’s a return to a place she loves and an experience on which she hopes to expand.

“While taking language courses in Bremen with people from all over the world, my enthusiasm for learning a language grew into a desire to teach,” says Youmans, who studied abroad in Bremen as a junior and returns to Germany as an English Teaching Assistant (ETA). “I'm so excited for another adventure—and to put everything I've gained from my English and German majors to a practical use!”

Established in 1946, the Fulbright Program provides more than 1,900 U.S. students, artists and young professionals in more than 100 different fields of study the opportunity to study, teach English and conduct research abroad annually. Prior to the 2019-20 cycle, the highest number of Fulbrights for Dickinsonians was eight awards last year and eight in 2008-09. Also, Dickinson hosted two Fulbright scholars on campus this academic year.

“I chose Dickinson because it was evident that caring—and caring deeply—is an integral part of the campus community,” says Alden Mohacsi ’19 (history), who will go to the Czech Republic as an ETA. “From ensuring that we were aware of the program and had opportunities to ask questions from a previous participant to interviewing—everyone involved in helping with the rigorous Fulbright application went above and beyond.”