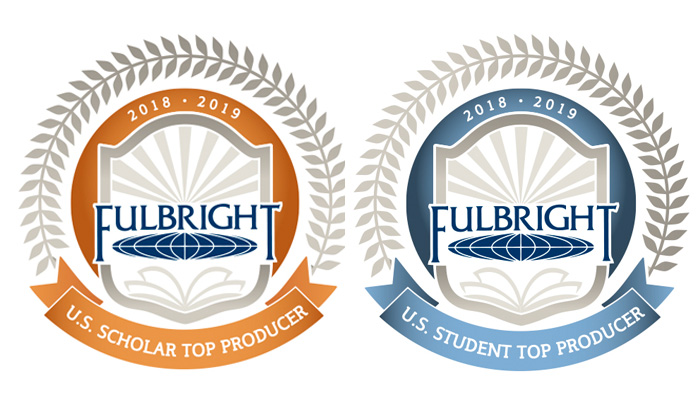 U.S. Department of State’s Bureau of Educational and Cultural Affairs names Dickinson a top Fulbright-producing college for the seventh time in the last decade

The U.S. Department of State’s Bureau of Educational and Cultural Affairs announced that Dickinson College is among only 11 institutions in the country to be named a Top Producer for both the Fulbright U.S. Student and U.S. Scholar programs for 2018-2019. The Fulbright Program is the U.S. government’s flagship international education exchange program.

In the last decade, Dickinson has been named a top Fulbright-producing college seven times, and over the past five years, 24 graduating seniors have earned Fulbright U.S. Student awards. This academic year, Dickinson is host to two Fulbright Scholars-in-Residence: Jane Battersby (fall 2018) and Maxwell Mudhara (spring 2019). Additionally, Dickinson’s Fulbright Program advisory team learned recently that a total of 20 students are semi-finalists for the 2019-20 program, and finalists will be notified by host countries later this spring.

“We are deeply proud of our students and scholars for their intellectual accomplishments and for mirroring Dickinson’s commitment to cultural understanding and exchange,” said Dickinson President Margee Ensign. “Our advisory team of faculty and staff also should be commended for providing exceptional guidance throughout the rigorous Fulbright application process.”

Since its inception in 1946, the Fulbright Program has provided more than 390,000 participants—chosen for their academic merit and leadership potential—with the opportunity to exchange ideas and contribute to finding solutions to shared international concerns. Over 1,900 U.S. students, artists, and young professionals in more than 100 different fields of study are offered Fulbright U.S. Student Program awards to study, teach English and conduct research abroad each year. Over 800 U.S. college and university faculty and administrators, professionals, artists, journalists, scientists, lawyers and independent scholars are awarded Fulbright U.S. Scholar awards to teach and/or conduct research annually. In addition, some 4,000 foreign Fulbright students and scholars come to the United States annually to study, lecture, conduct research and teach foreign languages.

“We thank the colleges and universities across the United States that we are recognizing as Fulbright top producing institutions for their role in increasing mutual understanding between the people of the United States and the people of other countries,” said Marie Royce, Assistant Secretary of State for Educational and Cultural Affairs. “We are proud of all the Fulbright students and scholars from these institutions who represent America abroad, increasing and sharing their skills and knowledge on a global stage.”