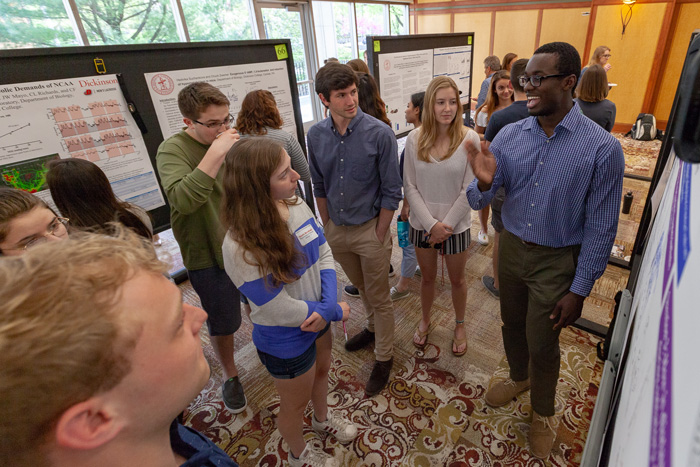 In the HUB recently, what seemed like miles of aisles framed the 34th Annual All-Science Symposium, a poster session that showcases senior projects. From biology and biochemistry & molecular biology to earth sciences and psychology, research was on full display. And topics such “Evaluation of microRNA gene expression in auto-inflammatory disease” and “The decrease in anxiety in valerian-injected C57BL6J mice and the non-significant effect in 129S1/SvlmJ mice” hammered home how alive the sciences are at Dickinson.

“In our lab, we are investigating the molecular mechanisms involved in the genetic reprogramming of AML [acute myeloid leukemia] cells to reverse their cancer cell state,” says Kate Mnuskin ’19 (biology), whose research project was a collaboration with Associate Professor of Biology Mike Roberts. “Specifically, my project was focused on investigating one gene, BCL11A, and the role that it may play in mediating this genetic reprogramming response.”

After graduation, Mnuskin will work at a lab at the National Institutes of Health’s National Institute of Child Health and Human Development as an Intramural Research Training Award (IRTA) Postbaccalaureate Fellow. “Being able to work in a lab as an undergraduate was such a valuable learning experience,” she says. “All of my biology coursework and research experience at Dickinson has provided me with confidence in my science abilities and really prepared me for my postgraduate work.

Starting his postgrad life, Mihir Pyakuryal ’19 (psychology) will be a lab manager at the University of Michigan’s Social Minds Lab, where he’ll be involved in comparative psychology research examining development of social behaviors in both children and apes. At the symposium, he showed off work he did with Professor of Psychology and Glen E. & Mary Line Todd Chair in the Social Sciences Marie Helweg-Larsen for her NIH-funded research that studied whether the stigma surrounding smoking helps or hinders quitting efforts.

“We found that people who read about stigmatizing experiences were more interested in quitting,” says Pyakuryal, whose research involved subjects both in Carlisle and nationwide in two separate phases and was recently presented at the national Society for Personality and Social Psychology conference.

“Through my research at Dickinson, I have been able to enhance skills that are important for a career in research,” he says, “skills that are limited not only to technical abilities—such as using data analytical tools, implementing protocols and managing everyday tasks—but also designing and piloting research, thinking theoretically and developing good writing skills.”

Spanning the summer and fall of 2018, the research presented by Billy Irving ’19 (earth sciences, Russian) originated with a study he undertook on a volcanic ridge in Iceland called Breiðivikir ridge.

“Glaciovolcanism is volcanism that is occurring in proximity with glaciers or ice,” Irving explains. “I was trying to determine whether this ridge was glaciovolcanic, which we now think is true, and I was trying to glean the sequence by which the eruption occurred.”

Irving did similar research with his thesis advisor, Walter E. Beach Chair in Sustainability Studies and Professor of Earth Sciences Ben Edwards, on Mt. Hoodoo in northwest British Columbia. After he graduates, Irving will be headed off to another geographic region entirely, as he undergoes intensive language study in Indonesia as a recipient of the Critical Language Scholarship.

“My international education at Dickinson has certainly equipped me for this program,” says Irving, “and I am very excited to begin.”