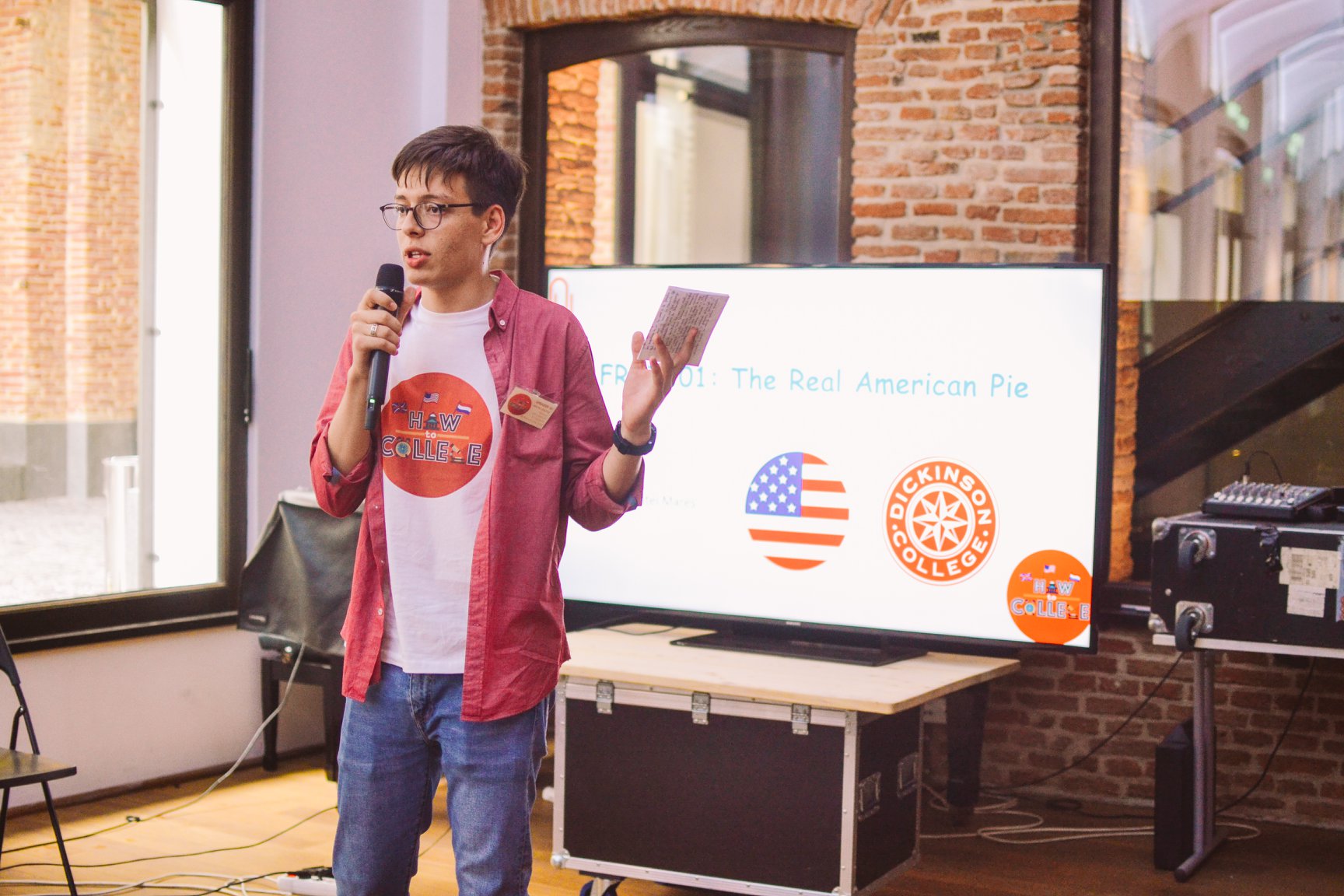 Matei Mares '21 delivers a presentation about what to expect on a U.S. college campus, as part of his work through the nonprofit program he cofounded, Uni 101: How to College.

As an international student from Romania, Matei Mares ’21 (international business & management) met many challenges during his first year at Dickinson. Now, he’s giving back through a nonprofit he co-founded that holds two annual events to help high-school students in his native Bucharest prepare for college and beyond.

International business & management, with a minor in French & francophone studies.

The Dark Between Stars by Atticus.

I knew from the moment I started applying to college that my professional goal was to create sustainable and profitable ways of bringing social value to people around me. So one of the ways in which I could achieve that is by understanding the business and financial aspect behind any enterprise. But it took me almost a year and a half to declare my major, as I was faced with so many new opportunities of subjects to study when I had to search for classes for the first time, which all appeared interesting. Soon I realized that I am able to take a considerable number of classes out of my major, without remaining behind the track.

… a firefighter, and after I discovered my passion for the outdoors, a mountain rescuer.

My decision to attend Dickinson was not influenced by seeing the campus or the facilities, as I was not able to visit the school beforehand. It was a combination of a very close relationship with my admissions counselor, a very nice impression from the alumni who interviewed me and the prestigious liberal-arts education I was going to be offered.

I have not decided between Rector and The Trellis.

One of the most interesting and surprising classes that I have taken so far is the Climate Change and Renewable Energies class with Professor of Physics Hans Pfister. While it is clear that physics is a domain in the completely opposite direction from the humanities, like my major in international business & management and minor in French, his interest in the subject and the very interactive and practical aspect of his pedagogical technique managed to capture my interest.

I am a barista (having worked in multiple coffee shops), and I am very passionate about specialty coffee (its sourcing, roasting, preparation and serving).

… my great grandfather, a Roman Catholic priest during the period when communists invaded Romania.

This past summer as I went back home, I did not apply for any jobs, but I continued working on the programming for the NGO I opened back in 2016. Apart from starting preparations for the Bucharest Model NATO Conference that happens yearly in December-January, along with high school friends that also study abroad, we created a brand-new concept event, called "Uni 101: How to College." It is a family-run project, specially crafted for high schoolers, through which we share the experiences, learnings and challenges faced while studying abroad at university, as we want to empower high schoolers to think more about their college journey, give them advice we wish we had before leaving to study abroad, and show them the multitude of interests, places and activities they can choose when going to university.

… people would be true to themselves and act on it.

In my adult life so far, my proudest accomplishment is definitely being admitted to Dickinson College and successfully adapting in a completely new environment. Before this, the proudest moment was when I succeeded in legally establishing my very own nonprofit organization. It is called Bucharest Youth League, and there are multiple projects under its wings. The largest event is the yearly Bucharest Model NATO  Conference, and the most recent one is Uni101: How to College, which helps high-school students prepare for college.

I have received questions in regard to this subject multiple times, especially since my international visa status will end at the end of my four years at Dickinson. At the same time, everybody in Romania asks me if I am considering the possibility of going back to help the development of my home country. To be honest, I do not have a definitive answer as of now, but I won’t limit my possibilities, and I am highly considering the option to pursue an MBA or doctorate.