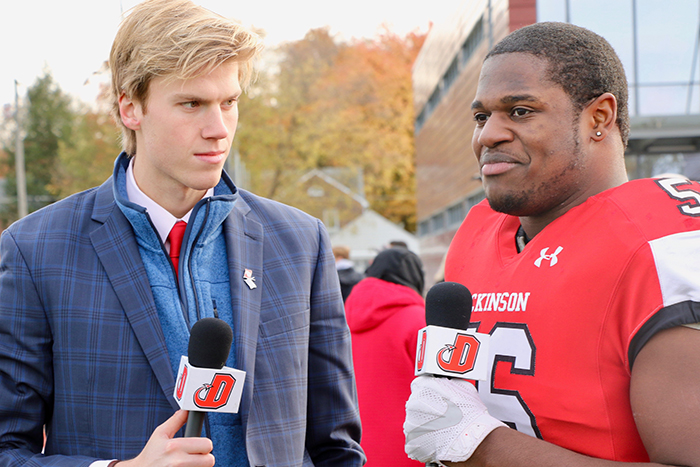 A broadcast that offers live coverage of a thrilling game. An interview that puts an athlete’s hard work into perspective. A photograph that captures the heart and focus of players on the field. That’s the power of sports communication, and it’s what students at the Red Devil Sports Network (RDSN) do every day.

RDSN is a collegiate sports broadcasting network that provides live audio and video coverage of select Dickinson athletics games and events. Since 2013, RDSN has enabled students to extend the classroom into the athletic arena by offering hands-on media production and leadership experience.

“Since we founded RDSN six years ago, our goal has always been to be the best student-driven sports network in NCAA Division III,” says Assistant Athletics Director of Media & Administration Christian Payne, who supervises the program. “We have taken incredible strides recently, growing our membership from five in August 2017 to 20 in February 2019.”

RDSN students engage all Dickinsonians—students, administrators, faculty, parents and alumni as well as prospective students—through dynamic digital content that features each of Dickinson’s 25 varsity programs. In the 2017-18 academic year, RDSN served 40,000 live viewers, and, according to Payne, that number is expected to rise this year.

“When we advanced to the NCAA lacrosse tournament after beating Washington and Lee in overtime last year, it truly felt like I was part of an ESPN broadcast with almost 2,000 people viewing the game over the livestream,” says Zach Popkin ’19 (economics), who has been involved with RDSN for four years and serves on its executive team. “Calling the game-winner and being able to do an on-field interview afterward are opportunities that I never thought I would be able to do at any level.”

As a student club within the Dickinson College Media Board, RDSN challenges students to learn, set goals and take on challenges by broadcasting, filming, writing, editing and managing social media accounts. But RDSN goes beyond the coverage of sports events—it’s about developing meaningful relationships with coaches and student-athletes, celebrating their efforts and talents to the wider community and showcasing the excitement of Dickinson to prospective students.

Shayyan Malik ’21 (computer science) notes that helping student-athletes within and outside the Dickinson sports network has been the most meaningful part of his involvement in RDSN. “Through this program, I helped a basketball senior student-athlete develop an introduction video for his internship application. He ended up getting the internship, and it felt good knowing that I was a part of that,” he says.

RDSN also has been integral for students interested in exploring the business side of sports. “I have been able to pinpoint exactly what interested me within sports multimedia, so I’ve been able to hone in on social media and sports marketing at a collegiate level,” said Erica Wells ’19 (sociology), who has held internships with the National Baseball Hall of Fame and Museum and the New York Jets, and most recently an externship in New York City at ESPN with Douglas Kramon ’93. “RDSN provides students with the creative freedom to really focus on the aspects of the sports industry that interest them the most, build on those experiences and prepare for the future.”

RDSN’s key goal moving forward is professional development. Last fall, Andy MacPhail ’76, the current president of the Philadelphia Phillies, hosted a group of first-year students who were participating in an RDSN Pre-Orientation program at Citizens Bank Park for an afternoon of sports media and business education. According to Payne, “This was a landmark day for RDSN because it showed our students the power of the Dickinson network. Our students saw how attention to detail in each broadcast and each video is integral to shaping a career in sports.” 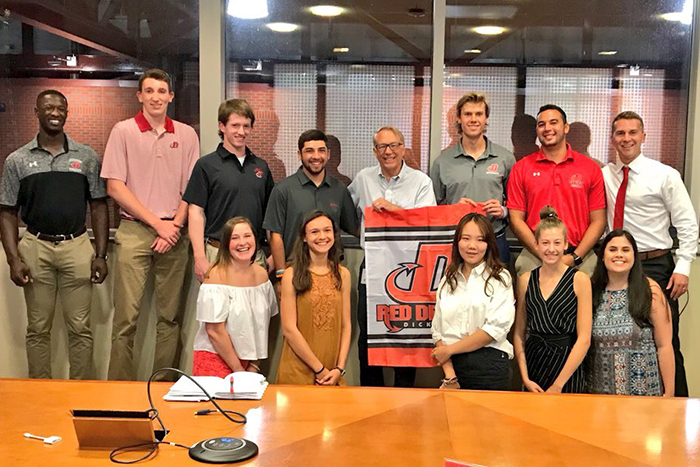 For Graham Klimley ’19 (English), RDSN’s president, the Pre-Orientation program was a confirmation of his future trajectory. “Every time I watch a professional sporting event now, I understand how much preparation the play-by-play and color commentators do,” says Klimley, who has interned at IBM, NBC Sports Network and MSNBC. “RDSN has given me vast knowledge about the sports communication world, and I can’t wait for what’s next.”

Students involved in RDSN see tremendous success when it comes to landing jobs given their wide exposure to sports writing, filming and marketing. RDSN alumnus Conor McLaughlin ’17 works in the athletics department at Northeastern University as assistant director of athletic video production. Other alumni have harnessed the skills learned in RDSN to land with companies as diverse as APCO Worldwide, Bank of America, Genesco Sports Enterprises, the Madison Square Garden Company, Warner Music Group and more.

“RDSN gave me a way to channel my lifelong passion for sports and to realize what kinds of careers were possible in athletics,” says McLaughlin. “Without a doubt, the experience I gained working with those in the athletics department helped me to develop some of the fundamental skills that are key to working in athletics and multimedia.”