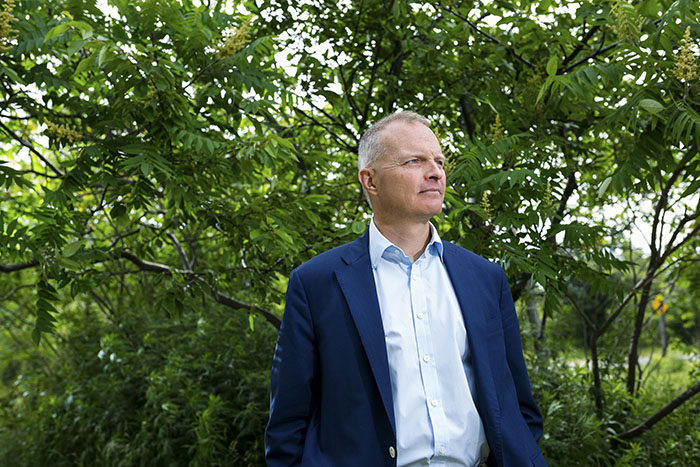 Keith Wilson ’89’s first job in finance seemed, at first glance, unexciting. While his more seasoned Bank of Boston colleagues jetted off to Hollywood and New York to hobnob with media and film clients, he worked with a small cable company in Philadelphia, a long-distance company in Mississippi and several telephone companies in the Deep South. But this junior banker recognized an exceptional opportunity and launched a cross-industry career on the leading edge.

As a high-schooler, Wilson excelled in class and on the football field and was courted by several Division I schools. But after attending a very large high school outside of New York City, he wanted a change of pace. Dickinson’s head football coach at the time, Ed Sweeney, convinced Wilson to try an overnight stay on campus, and Wilson opted for the college where he felt most at home. As a political science major with a history minor, Wilson served a high-level summer internship at the U.S. Army War College, conducting original research on terrorism in Central America and presenting at the Organization of American States. On the field, he helped his team seize its first Centennial Conference championship and record its most-ever wins for one season; he also worked with the Washington Redskins during their on-campus summer training.

After graduation, Wilson coached football at Bates College for a year, then earned an M.A. in Southeast Asian studies and international finance at the University of Michigan. Graduating into a tough job market, he accepted a junior banker position to get his feet wet in finance while taking part in an executive training program. Out of the gate, he was assigned to several telecommunications clients. And he soon realized that the cellphone industry was just taking off, and his seemingly lowrung client base—Comcast, WorldCom and PageNet—teemed with possibility.

“It was a red-hot and white-hot market—an exciting place to be,” he remembers.

Rising up the ranks, Wilson served as vice president and head of telecommunications finance at Union Bank of California and as executive vice president and chief financial officer of PAETEC Holding. In 2008, he received the Association of Financial Professionals Pinnacle Award, and in 2010, he was named by the New Jersey Tech Counsel as Chief Financial Officer of the Year. He also received the Rochester Business Journal’s “40 under 40” award.

“We’re taking a radical approach to the problems posed by population growth and the preservation of the planet, because what we’ve learned is that incremental changes really aren’t enough to solve the environmental problems we’re seeing,” he says.

At Dickinson, Wilson is a member of the Mermaid and John Dickinson societies, and in 2003, he and fellow members of the 1988 football team were inducted into the Dickinson Athletics Hall of Fame. He’s gratified to know that his alma mater is dedicated to humanistic and environmental causes, and he notes that his experiences at Dickinson gave him the courage to pursue big dreams and the nimbleness to change course as new opportunities arose.

“My high school was a very large pond, so it was amazing to me to think that, at Dickinson, if I raised my hand and said, ‘I want to bring Howard Cosell to campus,’ or ‘I want to do a radio show,’ or ‘I want to write an article for the paper,’ I could just go ahead and do it,’” he says. “I learned that if I put in the effort and made the most of all of the opportunities, I could make a difference. And once I saw that I could make a difference on campus, I realized that I really could go out and do bigger things out in the world.”