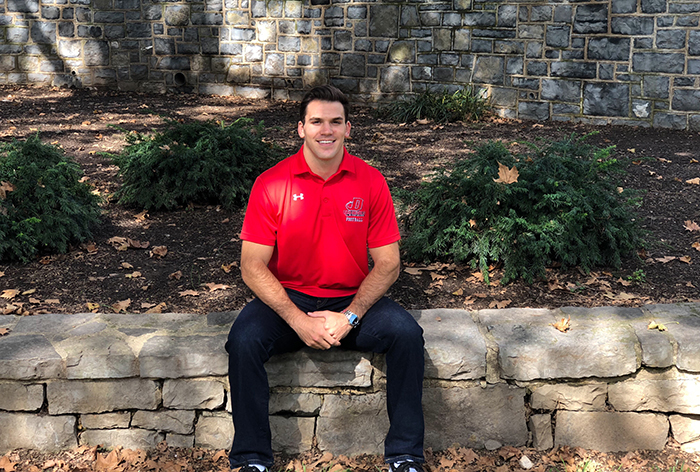 Whether he’s on the football field, in class or soaking up all he can learn during a hospital internship, Phil Petrina ’20 gives it his all. A Centennial Conference All-Academic Team member, District III Student-Athlete Scholarship recipient, Alpha Lambda Delta member and Hall Foundation Scholar, Petrina feels strongly about the benefits of a Dickinson education and the connections he’s made with faculty, students and alumni. Asked to name his favorite class, he chooses Italian, because the skills he gained allowed him to translate a 65-year-old family letter and connect with relatives overseas.

I chose to attend Dickinson because of its unique approach to a liberal-arts education. Dickinson values the depth and breadth of a liberal-arts degree in a way that pushes students to not only be their best, but prepares them to be successful in life. The small class size at Dickinson is a major advantage of this school over many other colleges. It is evident that the faculty truly care about their students’ success, and that they buy into the principles of this school and create classroom environments that are conducive to learning and preparing people for success.

The education here forces you to stretch your mind and think critically. In general, the critical thinking and writing skills that one gains here at Dickinson are very applicable to real-world success.

Another factor that played a major role in my decision to attend Dickinson: The college's 3+3 pre-law program, in partnership with the Penn State Dickinson School of Law. I recently was accepted into the program. That was a goal of mine since day one at Dickinson!

Studying the Italian language. As a Dickinson student, it is a graduation requirement to study a foreign language for a minimum of three semesters. Through my studies of the language, I have been given the unbelievable opportunity of connecting with and speaking to my relatives in Italy who do not know how to speak English. By studying Italian, I was able to connect my 83-year-old grandfather with his family in Italy. In doing this, I was able to translate for him a letter that his father (my great grandfather) wrote to his family in Italy in 1953. Seeing the smile on my grandfather’s face when he saw his father’s handwriting for the first time in many years was incredibly rewarding. Surely, it was Dickinson’s education requirement that ultimately provided me with that opportunity.

Last summer I was given the opportunity to intern for UPMC in Pittsburgh in their Corporate Services division. UPMC is world-class healthcare system that is driving medical innovation worldwide. This internship was appealing to me because they are the largest employer in the state of Pennsylvania, and a rapidly growing company. This company is laying the groundwork to become a worldwide leader in health care, and it was my interest to learn about what it takes to drive such a large organization from a business perspective. I gained real-world skills and I completed meaningful projects throughout this internship, which helped me gain perspective in the healthcare industry, and the business world in general. By the end of the summer, I had given two presentations of my work to the executives of the company, and learned that I can actually make a difference in my community by pushing myself to be the best that I can be.

… the president of the United States.

Following my undergraduate studies, I plan to attend law school. While I know that law school will be a great challenge, I am certain that the skills I have acquired as an economics major at Dickinson have well prepared me to be a successful law student and attorney. Through Dickinson alumni connections and events, I have been given the opportunity to meet many successful attorneys, judges, and politicians who attended Dickinson College. Networking is a huge skill for any career, and Dickinson has an impeccable network of highly successful alumni.

Making the Dean’s List every semester of college thus far.

We would all come together as one united people, and we would welcome everyone’s viewpoints.

To embrace the opportunity of being at such a fine institution, cherish it and seize it. There are many people in the United States who do not have the opportunity of attending Dickinson College. This is truly a one-of-a-kind opportunity that I want to make sure I enjoy and never take for granted.