Ahead of the Curve 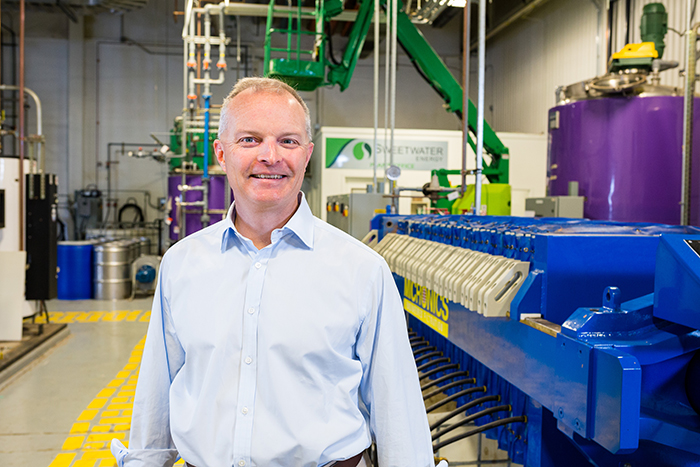 As a recent Dickinson College grad in the early 1990s, Keith Wilson ’89 recognized the hallmarks of an impending tech revolution and prepared to meet the challenge. Now, he’s positioned himself again at the forefront, this time as co-founder of a company that funds and develops cutting-edge sustainable-energy and medical technologies. He says his Dickinson education helped him prepare for life ahead of the curve.

A football player since elementary school, Wilson had his eye on several the Division I universities, and on the U.S. Merchant Marine Academy, when Head Football Coach Ed Sweeney invited him to an overnight campus visit at Dickinson. “The campus, the people I met, the team—I immediately knew that this was the right place for me,” the NYC native remembers. “It was the place where I felt most at home.”

Wilson joined the Red Devils football team, declared a political science major with a minor in history and got involved, on and off campus. He sharpened his leadership skills through Alpha Omicron Delta and the Public Affairs Symposium (PAS), serving as PAS board member for two years (and meeting legendary sportscaster Howard Cosell in the process). He also studied abroad in China; served a high-level summer internship at the U.S. Army War College; conducted original research on terrorism in Central America for a paper presented at the Organization of American States; and worked with the Washington Redskins when they came to campus for summer training. During his senior year, he wrote a thesis on colonialism in Asia and helped the football team win its first Centennial Conference championship and record its most wins for one season.

After graduation, Wilson spent a year coaching football at Bates College, then entered the University of Michigan graduate school, earning an M.A. in southeast Asian studies and international finance, with a goal of one day working for a governmental organization. Graduating into a tough job market, he shifted gears, getting his feet wet in finance, with hopes of eventually taking that experience into the Asian finance market. But as he started his job as junior banker at Bank of Boston, he discovered an even more compelling opportunity.

Most of Wilson’s colleagues on the communications and media-finance team wanted to work in media and film finance, so they could hobnob with beautiful people and work on big deals. As a rookie, Wilson was assigned to the less glamorous communications organizations, including a small cable company in Philadelphia, a long-distance company in Jackson, Mississippi, and several telephone companies in the Deep South. To best serve them, he studied emerging developments in cable, internet and cell phone technology, and the more he learned, the more he realized that sometimes, it pays to be the new guy.

His cable-company client? Comcast. The Jackson-based company? WorldCom. Another early client was Pagenet, the largest paging company in the nation. “It was red-hot and white-hot—an exciting place to be,” he remembers.

From there, Wilson rose up the ranks in an exploding communications-technology finance market. He served as vice president and head of telecommunications finance at Union Bank of California and as executive vice president and chief financial officer of PAETEC Holding, where he grew the company from $100 million to $2.5 billion. In 2010, he was named by the New Jersey Tech Counsel as Chief Financial Officer of the Year, and in 2008, he received the Association of Financial Professionals Pinnacle Award. He also was a 2008 finalist for Best Finance Executive’s American Business Awards (the Stevies) and a 2005 recipient of the Rochester Business Journal “40 under 40” award.

“We’re taking a radical approach to the problems posed by population growth and the preservation of the planet, because what we’ve learned is that incremental changes really aren’t enough to solve the environmental problems we’re seeing,” he says.

It’s a cause he cares deeply about—perhaps especially so, because he and his wife, Betsy, are the parents of four young children. Wilson serves on the board of his children’s school as well as on the boards of the Seneca Park Zoo Society, RPO Fund Inc., Sweetwater Energy, Gradient Corporation, Health Care Originals and Iron Smoke Whiskey. At Dickinson, he’s a member of the Mermaid Society and the John Dickinson Society. In 2003, he and fellow members of the 1988 football team were inducted into the Dickinson Athletics Hall of Fame.

This spring, Wilson hosted President Margee Ensign at his Rochester facility and gave her a private tour of the plant. He says he’s gratified to know that his alma mater is dedicated to humanistic and environmental causes. He also notes that his experiences at Dickinson gave him the courage to pursue big dreams, the commitment to help make a positive difference and the nimbleness to change course as new opportunities arose.

“Growing up in a blue-collar environment outside of New York City, it didn’t seem possible that I could have any impact,” he says, explaining that NYC is a dauntingly large pond. “Then I came to Dickinson, where community leadership is valued and encouraged and where there were so many opportunities to get involved. And once I saw that I could make a difference on campus, I realized that I really could go out and do bigger things out in the world.”