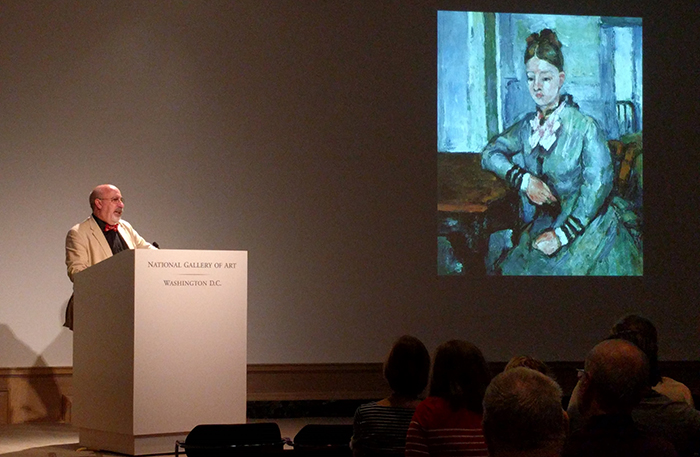 Eric Denker '75, senior lecturer and head of tours at the National Gallery of Art, delivers a lecture on Cezanne's Portraits during the April 28 regional event.

Arts education is alive and thriving at Dickinson, and it continues long after graduation. On Saturday, April 28, alumni in three major metropolitan areas brushed up their arts savvy together during museum meetups led by Dickinson experts, on their home turf.

Hidden gems at the Met 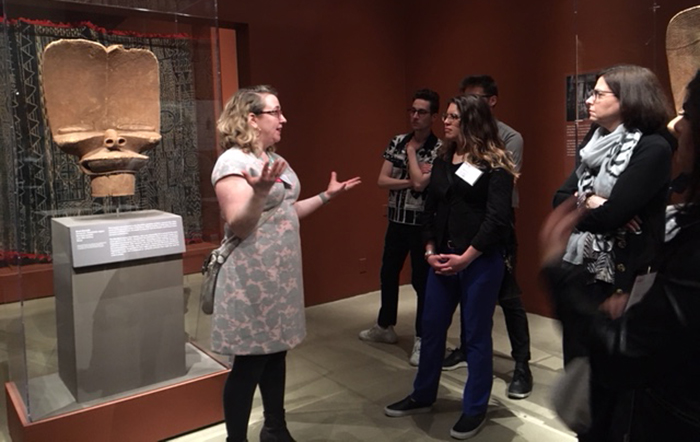 Heather Flaherty, curator of education at The Trout Gallery, discusses rare Cameroonian headdresses at the Metropolitan Museum of Art.

Twenty-five alumni in the New York City region took part in a sold-out insider’s tour of the Metropolitan Museum of Art led by Heather Flaherty, curator of education at The Trout Gallery and a former Met educator/lecturer. After the tour, approximately 20 group members retired to the museum patio for drinks and friendly conversation.

One of the highlights was a 770-pound Italian Renaissance sculpture of Adam that had crashed to the ground in 2002 after its base buckled. Conservators put it back together in 2014, using modeling technology that was previously unavailable. Flaherty explained the conservation process and pointed out the places, barely visible with the naked eye, where the restoration work was evident.

The group also viewed a display of the only known tsesahs, or Cameroonian headdresses, in the world. “That was a once-in-a-lifetime opportunity,” said Flaherty, who sparked lively conversation about which headdresses each attendee liked best and why.

“It was fascinating,” said Catherine Rude Filiato ’86, who has attended several similar events over the years, including one focused on political science. “We learned things and looked at things that we never would have discovered otherwise.” 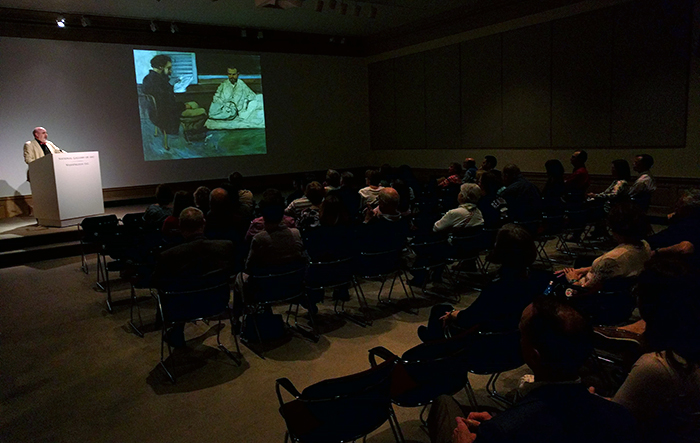 Dickinsonians discovered that there's more to Cezanne than still lifes during Eric Denker '75's lecture at the National Gallery.

D.C.-area alumni took in an illuminating lecture at the National Gallery of Art about post-impressionist artist Paul Cézanne, focusing not on the landscape and still-life paintings for which he is best remembered, but on the artist’s achievements in portraiture. Then, they drank in Cézanne Portraits, a first-of-its-kind exhibition that arrived in D.C. after showing to great acclaim at the Musée d'Orsay, Paris, and the National Portrait Gallery, London.

The contextual lecture was delivered by Eric Denker ’75, a Dickinson trustee, president of the Friends of the Trout Gallery, active member of the Washington, D.C., Alumni Club, and senior lecturer and head of tours at the National Gallery of Art who has also led art trips and excursions for students and alumni.

“His lecture brought the Cezanne exhibit to life,” said David Sellers ’78, who attended with wife Sandy Achenbach Sellers ’80. “His discussion of the history and significance of the individual paintings, as well as background about Cezanne, made our walk through the exhibit a particularly enriching experience.” 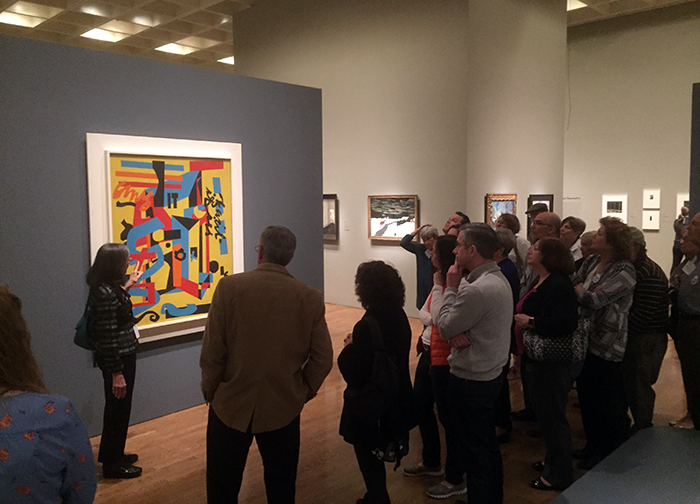 Alumni and friends of the college learn what to look for in paintings during a private tour of the Philadelphia Museum of Art.

Fifty alumni and friends of the college in Philadelphia began their day at the Philadelphia Museum of Art with a light breakfast in the museum’s second-floor atrium, overlooking the iconic golden statue.

“It was great to see everyone mingling,” said Jenifer Gilio, senior advancement officer, who delivered brief remarks and invited everyone to participate in the June 13 Career Conversations event, where Philly-area alumni will have a chance to meet Dickinson College President Margee Ensign.

The group then divided in half and took smaller-group private tours of the museum’s Modern Times exhibition, which highlighted the ways that early-20th-century artists challenged conventions in a fast-changing society. One of the docents leading the tour was Zoe Pappas, wife of the late Dean Pappas '62.

“The docent was knowledgeable, and the pace and content of the tour were perfect,” said Sheryl McCloskey '81, who revisited some favorite parts of the museum after the tour and enjoyed the chance to get to know a neighboring city better while connecting with friends, old and new.

Those connections are the heart and soul of Dickinson’s regional-community events, said Alumni Council member Mike Pennington ’07, who attended the Philly event with Loren Pease ’13 and makes a point of taking part in 15 or 20 of these events annually because he enjoys the chance to strengthen ties with fellow alumni who care deeply about their alma mater.

“Another significant attraction is the opportunity to meet and hear from Dickinson alumni about the many interesting things they are doing and have accomplished,” noted Sellers. “That’s an opportunity many colleges are unable to offer their alums.”