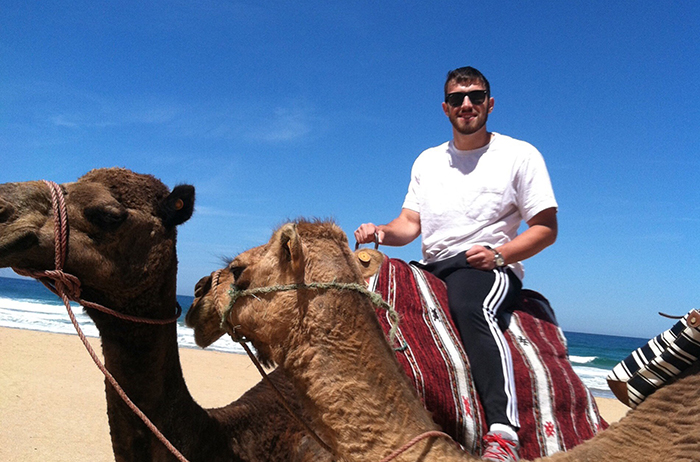 Alec Ward '18, during a study-abroad stint in Morocco.

Alec Ward ’18 is a defensive back on the football field and a double major in international studies and religion, with a minor in Arabic. He studied abroad in Morocco and also served an internship with the U.S. Army War College Peacekeeping and Stability Operations Institute (PKOSI), researching governance structures during the Syrian Civil War; delivering a report on potential outcomes for the Syrian conflict; participating in a crisis-negotiation exercise on increased conflict in the Nagorno-Karabakh region and working alongside high-ranking Department of Defense employees. For his senior capstone project, he’s researching Saudi Arabia’s 2012 military intervention in Yemen.

International studies and religion, with a minor in Arabic.

Dickinson is what you decide to make of it.

The Golden Compass by Philip Pullman.

Arriving on campus, I immediately felt like it was somewhere I could spend the next four years of my life.

[Thomas Bowman] Professor [of Religion and Philosophy Ted] Pulcini. He has really been a mentor for me, and I would highly recommend his classes, based on his knowledgeability and enthusiasm for the subject matter.

I studied abroad in Rabat, Morocco [with AMIDEAST]. The opportunity to help coach both men’s and women’s American football programs in Rabat was a real moment of cross-cultural connection for me and allowed me to combine my passions for travel and athletics.

On being a student-athlete at Dickinson:

Dickinson has been an exceptional environment to be a student athlete. I have had the opportunity to play college football while pursuing my academic interests at the same time.

My mom. She taught me to treat other people with respect, don’t take things too seriously and always listen to the oldies.

I interned with the U.S. Army War College. I wanted an opportunity to improve my research skills and work alongside professionals from military, academic and State Department backgrounds. My summer project was to map the state-building capabilities of various domestic actors in the Syrian civil war and use the data to extrapolate possible post-conflict outcomes.

This past semester I completed a senior capstone paper for my international studies seminar. I researched Saudi Arabia’s 2012 military intervention in Yemen as a case study for trends in contemporary Saudi foreign policy.