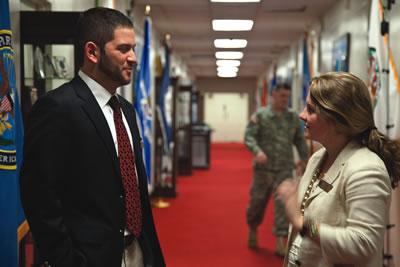 James Pagano ’12 hands over his keys and cell phone to the security guard before him and watches as they are tucked into a locker. His escort leads him down a stairwell and into a conference room. Taking the nearest seat, he glances around him: A handful of equally anxious interns are interspersed with a few Army officers.

The large-screen TV at the end of the conference table flickers, and three split screens appear. Soon, he is staring into conference rooms in Afghanistan, Pakistan and Washington, D.C., each filled with military and civilian government officials. Pagano is observing talks among high-level NATO members—one of many firsthand experiences he would have as an intern at the U.S. Army War College Peacekeeping and Stability Operations Institute (PKSOI).

Established in 1757, the Carlisle Barracks has a complicated history: it served as a Revolutionary War post, saw action during the Battle of Gettysburg and housed the Carlisle Indian School. The U.S. Army War College became a part of the barracks in 1951, but it would be 50 years before formal partnerships with Dickinson emerged. As the War College grew—adding the PKSOI, the Army Heritage Education Center and the Strategic Studies Institute—expanding faculty contacts and internships through official alliances began to make sense to leaders at both institutions. “It was such a natural idea for two academic institutions within blocks of each other to seek opportunities for interchange,” says Ret. Col. Jeff McCausland, visiting professor of international security studies at Dickinson and distinguished visiting professor of research at the War College. “It’s like we were growing up together.”

One of those opportunities was the 2010 formal internship agreement with the PKSOI. Twenty Dickinsonians have interned through the program so far, and more are applying through the Career Center every semester. “There’s great value for the students who take advantage of this program,” says Amity Fox ’04, assistant director of the Career Center and internship coordinator. “Professionally, they get exposure to immense resources; they’re working directly with colonels, getting an insider’s view and helping to contribute to articles and studies that have global reach.”

This spring, the number of interns at PKSOI spiked from an average of three to four per semester up to 11.

“It’s getting more popular because the other interns are talking about it,” says Anna Krenkel ’12, a fall 2011 intern. “Word is spreading among the relevant majors that there’s a great way to get experience, and it’s right here in Carlisle.” Aside from the research project she was assigned—compiling a task list for commanders based on Army peacekeeping and stability operations doctrine—Krenkel attended interagency meetings in Washington, D.C., volunteered as a note-taker during a conference at the War College and participated in a weekend-long simulation on conflict resolution.

Emily David ’13 and Zachary Steinborn ’12 were among the 11 interns at PKSOI this spring. David, an English major, compiled an information booklet on all 265 peacekeeping institutes worldwide to encourage cooperation. Steinborn, an international-studies and Middle East-studies double major, conducted research for a Peace, Stability and Irregular Warfare project. “At first I was a little intimidated,” David recalls about coming into PKSOI. “But the officers here are so open and friendly, and it’s such a supportive environment. They truly value the students who come through here from Dickinson.”

Dickinson and the War College also share top faculty, from the General Omar N. Bradley Chair in Strategic Leadership to Doug Stuart, professor of political science and international studies at Dickinson and the first-ever holder of an adjunct chair at the War College, where he is an adjunct research fellow. “I remember sitting around with [Provost and Dean  Neil] Weissman and some others and someone said, ‘Our collaboration with the War College is already so rich, let’s make it more institutionalized,’ ” says Stuart. “That’s the germ that led to the Bradley Chair. Then we decided to go a step further and create adjunct affiliations with two War College professors in that role at Dickinson, and vice versa.”

There have been 10 Bradley chair-holders to date, including a Pulitzer Prize-winning journalist, a former commander in chief of the U.S. Pacific Command and a former assistant secretary of state for public affairs.

Michael Fratantuono, associate professor of international studies, business and management, was a visiting professor at the War College in the Department of National Security and Strategy. The experience helped him gain more confidence in his teaching methods and a fuller understanding of the War College’s resources. It also aided him as the lead author of the proposal to establish Dickinson’s certificate in security studies in 2010. “We wanted to branch out beyond the country/ region specialization in international studies,” Fratantuono recalls. “It’s a win-win. The department has focused concentrations in globalization and sustainability and security studies, our students and faculty can utilize the resources from the War College, and it leverages the existing relationships.”

Shared research is another key element in the partnership. McCausland and Stuart have published books through the War College’s Strategic Studies Institute (SSI). Fratantuono and Dave Sarcone, associate professor of international business and management, submitted a proposal to the SSI for a project on the United States’ strategic relationship with India. Conferences and expert presentations held at the War College are open to the Dickinson community, and vice versa.

“In my research, I do a lot with security,” says Andrew Wolff, professor of political science, “so it’s very advantageous to be here with the War College. We can draw on each other’s expertise.” Fratantuono notes that the students “are encouraged to use the facilities there as well, including their amazing library. We have wonderful young scholars in the international-studies department who are becoming increasingly aware of these resources.” Pagano, an international-studies major who earned a security-studies certificate, also had his research published in Peace & Stability Operations Journal Online after his summer 2011 internship.

For Lt. Col. Pete Lugar, professor of military science and commander of ROTC’s Blue Mountain Battalion, the relationship his cadets have with the professionals at the War College is deep and invaluable. While Lugar is only in his second year at Dickinson, the partnership, which includes luncheons on campus, career presentations and individual outreach, spans decades.

“The War College is key to the development of our cadets,” he says. “It’s an added component that we really try to capitalize on. [The faculty] are leaders in the Army today, so it’s a perfect fit for them to come talk to the cadets, who are the future of the military.”

According to Stuart, this high level of collaboration is what led to Dickinson being the lead institution on a $100,000 grant from the Andrew W. Mellon Founda-tion to research ways to enhance collaboration between select liberal-arts college and their neighboring military institutions. “Nowhere else in the U.S. does another war college have this kind of partnership with an undergraduate institution,” says McCausland. “It makes Dickinson uniquely positioned to be involved in the national conversation about civil/military relations.”

“It’s great to have this academic swapping of knowledge,” adds Wolff. “There’s real synergy between the two institutions.”