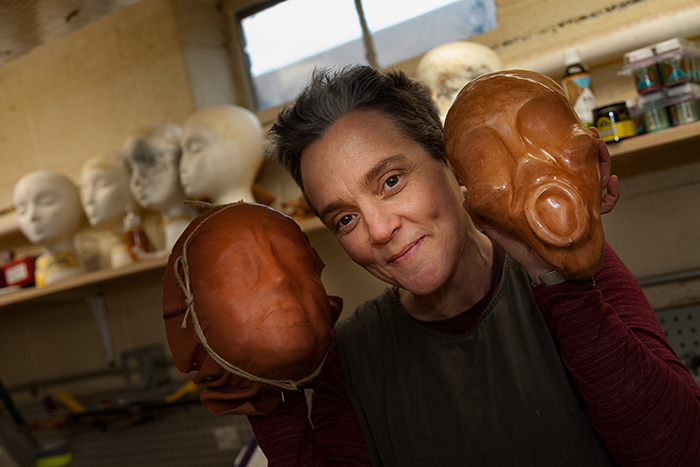 Professor of Theatre Sherry Harper-McCombs poses with masks-in-progress during a sabbatical focused on maskmaking and puppetry. Photo by Carl Socolow '77.

American puppetry has come a long way since Fred Rogers first deployed an imaginary kingdom to teach children about families, feelings, fairness and other basic human experiences. Five decades later, Broadway and off-Broadway hits have taken puppetry out of the realm of child’s play and into the sphere of complex and grown-up themes, where it has long resided in many other parts of the world.

This spring, Sherry Harper-McCombs, professor of theatre, will travel to Yogyakarta, Indonesia, to study contemporary global puppeteering techniques in depth, with funding from a $2,500 international travel grant from the United States Institute for Theatre Technology. She is one of only two professional costumers to receive this particular grant. She’ll serve her two-week residency with Indonesia’s Papermoon theatre troupe, a company known for its boundary-breaking techniques and works.

Shooting for the paper moon

A professional costumer whose interests also include scenic design, crafts, properties, mask-making, fabric painting and puppetry, Harper-McCombs learned about Papermoon through Anastasia Putri ’16 (theatre & dance, anthropology), an Indonesian native who put her in touch with the company’s founders, Maria Tri Sulistyani and Iwan Effendi. The professor plans to shadow the Indonesian artists as they make paper and paper puppets and to observe as they co-present works onstage, along with an Australian group, Polyglot Theatre.

She's especially interested in exploring the ways the Papermoon puppeteers use whimsical puppets and multimedia performances to shine a light on Indonesian history and on contemporary issues, such as corruption and sexual assault. “They also have a really strong community spirit about their work,” she says, “so in addition to learning about their storytelling, artistry and construction techniques, I hope to learn about how their work interacts with the community, and feeds into the community.”

After returning home, Harper-McCombs plans to develop a puppet production—one that does not rely heavily on language to drive the plot—and then sharpen it, first at Pendragon theatre in upstate New York (under direction of Karen Kirkham, professor of theatre), and then during a fall production on campus. She’s pursuing funding to take the production back to Indonesia in October, to present it at a festival bringing professionals from around the world to perform, share meals and collaborate.

Giving 'a leg up'

Harper-McCombs hopes to collaborate with a student every step of the way, and ultimately, envisions incorporating puppetry into a mainstage Dickinson production. This project will build on past puppeteering at Dickinson, including a 2013 production of The Conference of the Birds, which incorporated shadow puppets, and a 2016 residency with the Vermont-based puppetry troupe Bread and Puppet, cosponsored by the Center for Sustainability Education. Harper-McCombs has additionally included puppetry in her Principles of Design class, co-taught with Kent Barrett, assistant professor of theatre design.

“More and more, puppetry and masks are becoming mainstreamed in the theatre world, and so theatre students who have had some experience with puppetry may have a leg up,” she says.

Meanwhile, she looks forward to discovering new ways to use puppetry to craft a more inclusive and vivid audience experience.

“I have this very strong belief that the way in which theater stays vibrant and stays relevant is that we basically do what we do best—being theatrical. And puppetry is the ultimate in theatricality,” she says, explaining that when objects are mouthpieces—and particularly when the people who manipulate those objects are visible—audience members must consciously decide to suspend disbelief, becoming involved in the art-making process. “It removes the fourth wall in interesting ways.”