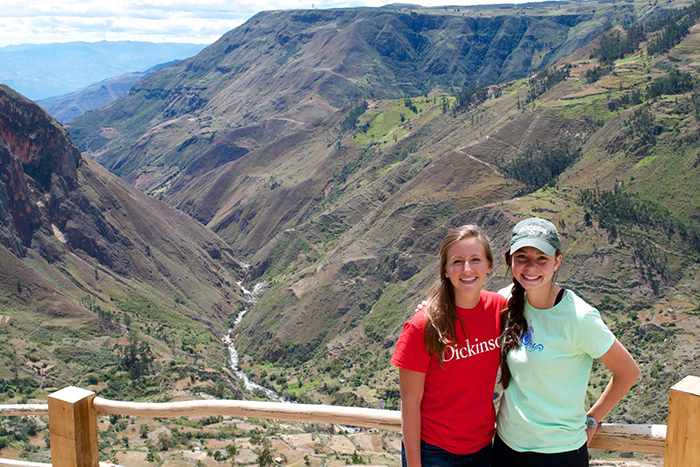 After a service trip to Ecuador (shown above) seniors Natalie Cassidy (left) and Audrey Ling studied abroad in Argentina and conducted original research.

Seniors Audrey Ling and Natalie Cassidy have long been passionate about social and environmental justice, and while studying abroad in Argentina last year, they each conducted original research around these causes. A year later, both are continuing the work they began while enrolled in the Dickinson in South America program.

Ling is a double major in biology and Spanish who’s involved with the Trout Gallery, club soccer and Alpha Lambda Delta, and, along with Cassidy, she’s taken several Dickinson service trips, most recently as a student-coordinator. She interned with the National Cancer Institute, in Bethesda, Maryland, last summer and conducted student-faculty research on hemlock tannins and adelgids this past fall.

While studying abroad in Argentina last year, Ling learned about how the government’s decisions around the use of natural resources was often detrimental to the indigenous Huarpes community. A field trip to Lavalle, Argentina, where the Huarpes resettled after being pushed out of their homelands, intensified her interest in the issue.

“Seeing how their main water source had been taken away to provide water for those in the city was heart-wrenching and spurred so many questions for me,” Ling later wrote, adding that she saw a parallel within her own country’s history. She developed her final project for the course around the issue, but even after her return to campus, some questions still lingered: How did governmental policy influence natural-resource use, and how did that use affect indigenous populations in Argentina? And above all, what was the Huarpe perspective?

“I want to make the voices and narratives of these individuals, and this community, heard,” she wrote, in an application for a grant to enable further research.

Last semester, Ling received a grant through the Center for Global Study & Engagement to return to Argentina and continue her work over winter break. Her two-week trip to Lavalle, Argentina, included interviews with Huarpe citizens about issues related to social justice and citizenship. She’s writing up the project as an independent-study course with the Department of Spanish & Portuguese, and she plans to make a short video to highlight some of her interview subjects. 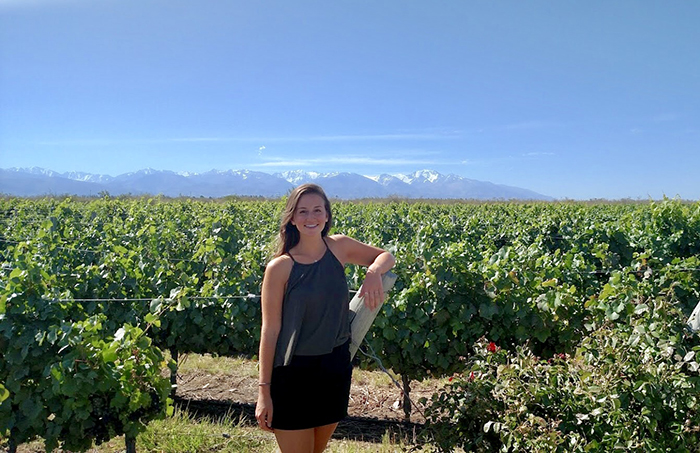 Natalie Cassidy '18 poses in a vineyard in Mendoza, Argentina, where she conducted original research.

Cassidy is also a seasoned traveler whose eyes were opened to global-poverty issues through a service trip to rural southern Guatemala when she was 12. She took a gap year after high school, studying sustainable agriculture and community development as she traveled through Panama, Costa Rica and Peru. That experience deepened her interest in sustainable food systems and led her to pursue a summer in Ecuador as a permaculture design and agroforestry intern in 2015. Through Dickinson service trips, she’s traveled twice to Belize, along with Ling, to serve with Belize’s School Garden Initiative.

During her yearlong study-abroad stay in Mendoza, Argentina, Cassidy opted to take courses at Universidad Nacional de Cuyo, where she could take classes like Environmental Law Legislation and Agricology. She used GIS software to explore changes in land-use patterns, and after talking with classmates and professors about the effects of deforestation in rural communities in northern Argentina, she proposed an independent study on the subject.

Cassidy organized a trip to a peasant-farmer resistance organization’s headquarters and participated in one of the organization’s national events, bringing Argentineans from across the country together around issues of injustice concerning peasant farmers, indigenous people and rural communities. A visit to Peasant Farmer University, which seeks to grow future leaders in rural spaces and preserve local heritage and identity, brought a chance to conduct interviews in Spanish with leaders of, and members in, the movement.

Back on campus, Cassidy continues to research modern peasant farmer-resistance movements, and the divisions between rural and urban communities across the globe, for her Latin American studies thesis. She also engages the issue as a student-worker at the College Farm, where she teaches classes in Spanish to Carlisle community members, and as a Baird Sustainability Fellow and global ambassador for the Dickinson in South America program. She plans a career in local and global food systems and community-building.

Experiences like these can have a big effect, says Mariana Past, associate professor of Spanish & Portuguese and Latin American, Latino & Caribbean Studies and coordinator for the six-year-old Dickinson in South America program. “These students are making meaningful connections between their studies and the larger world,” she says.