'You're the Real Answer' 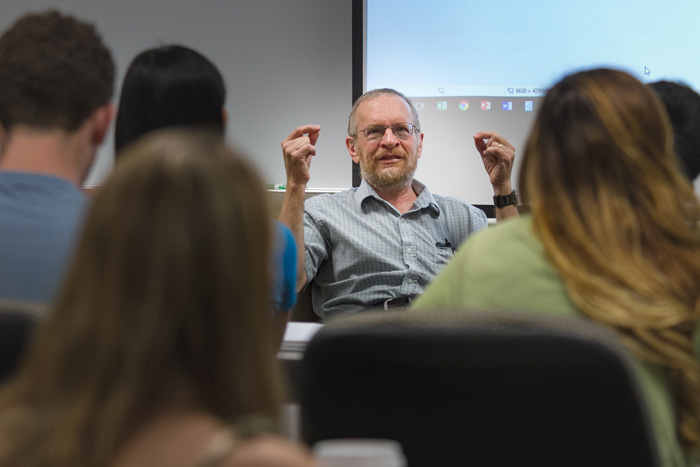 Climate-change expert Richard Alley recently urged students to open the "door to a better future" during Dickinson's annual Priestley Award lecture. Presented each year, the Priestley Award brings to campus a distinguished scientist, whose work has contributed to the welfare of humanity and to our understanding of science and the world, to deliver a lecture and visit classes.

Dickinson presented this year's Priestley Award to Alley, the Evan Pugh University Professor of Geosciences at Penn State, for his work on using ice sheets and glaciers to recognize abrupt climate change, and for his tireless efforts to educate the global citizenry of the potential risks. When he introduced Alley at the lecture, Marcus Key, Joseph Priestley Professor of Natural Philosophy, expressed what a great choice he was to receive an award named in honor of Joseph Priestley, the discoverer of oxygen.

“It’s appropriate that we give the Priestley Award to Professor Alley, as he regularly employs stable oxygen isotope ratios to quantify temperature to calculate rates of climate change,” said Key, in his introductory remarks at the event. “Priestley at the time did not know that oxygen had three stable isotopes, but without his fundamental work being the first to isolate oxygen, Richard’s research may have taken a different direction.”

The Priestley Award was first presented in 1952 to Sir Hugh Stott Taylor for his achievements in physical chemistry and has since been awarded to such diverse scientific luminaries as Vinton Cerf, Margaret Mead, Marvin Minsky and Carl Sagan. Alley has authored 300 peer reviewed articles and seven books, one of which became the basis of a 12-hour PBS TV series. Decorated widely for his body of work, Alley was elected a Foreign Member of the Royal Society and a member of both the U.S. National Academy of Sciences and the American Association for the Advancement of Science. He also serves as contributor to the United Nations Intergovernmental Panel on Climate Change, which shared the 2007 Nobel Peace Prize with Al Gore.

Before the lecture, Alley spent the day on campus, meeting with students and faculty members and giving guest lectures in Dickinson classrooms.

“I think it’s really valuable to have experts come to campus for many reasons: For one, it provides a new perspective on topics that you may have already discussed with professors and peers but continues any conversations you have had with added insight and expertise,” said Billy Dougherty ’18 (earth sciences, environmental science), who noted that the host department, in this case earth sciences, makes the Priestley speaker accessible during the visit. “And if the topics are new to you, then it gives you the opportunity to be exposed to new ideas from an expert in the field.” 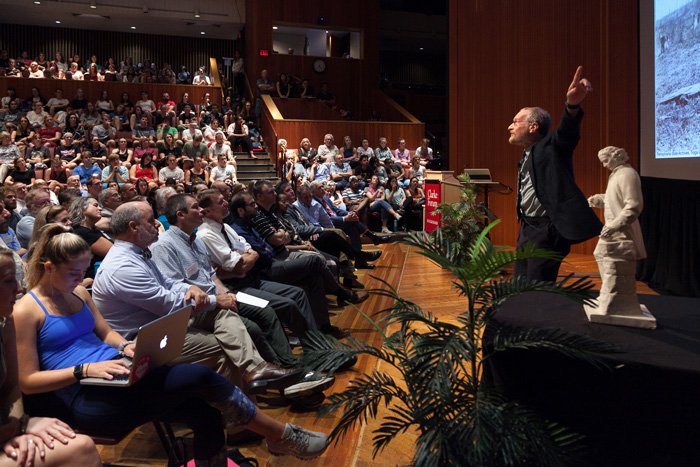 Taking the stage for the Priestley lecture, Alley discussed how humans, quenching their need for sources of energy, have always found new natural resources to burn through—from whale oil to fossil fuels—far faster than they replenish. And it’s only getting worse.

“Whales and trees grew back in a hundred years,” Alley told the rapt audience. “Fossil fuels will grow back in a million.”

Claiming that he was “going to scare you and then … show you fantastic things,” Alley noted that the very idea behind climate change has been around since Joseph Fourier’s 1829 hypothesis. And now, no matter where you look—the ground, air, oceans, views from space—all sectors show clear signs of warming. And as people continue to produce a half ton of trash per person per year and 19 tons of CO2 (in the U.S. alone), disease, crop failure, drought, rising sea levels and economic contraction will surely follow. But the evening wasn’t about doom and gloom as much as hope.

“You’re the real answer,” Alley told the audience. “We are the first generation that can build a sustainable energy system, improving the economy, employment, environment, ethics and national security.” Alley touted familiar renewables as the way forward, but his focal point was that now more than ever methods such as harnessing wind and solar are not only workable but are solutions that are within our grasp.

“You really are the first generation that knows you can do this,” he said. “You know that this will work. If you build this, it’ll power everybody. It’s a door [to] a better future.”

The event was supported by the Dickinson’s Priestley Fund and the Clarke Forum for Contemporary Issues. It was co-sponsored by the departments of biology, chemistry, earth sciences, environmental studies, math & computer science, psychology and physics & astronomy.