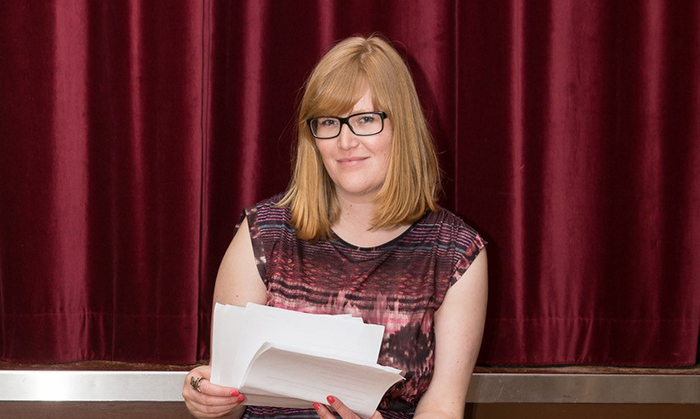 Insa Kohler, a former exchange student from Dickinson, returned to campus to read from her newly published book.

Dickinson’s foreign-language departments kick off their writer-in-residence series with two sentimental favorites this fall. The first was an up-and-coming writer/performer who sharpened her craft as a Dickinson exchange student, and the second, a musician and writer who will mark his second visit to Dickinson this year.

The former exchange student is Insa Kohler, a German journalist, author and monologist who served as a Dickinson overseas assistant during the 2009-10 academic year, taking classes in creative writing, literature and art, and co-hosting a WDCV radio show with a European theme. A graduate of Dickinson's partner university in Bremen and of the University of Berlin, Kohler has been reading her short stories in poetry-slam-like competitions since 2010 and has captured national prizes in her home country. During her weeklong residency, she spoke with students in language and writing classes and delivered a public reading of stories from her first book, Leben auf Spaßflamme (“Life in the Fun Lane”), published six months ago.

“I'm super happy to be back—it’s almost like time traveling,” Kohler told an audience that had gathered in Denny Hall on Sept. 13 to hear her read her work in in her native tongue, while an English translation projected on the screen. “I have so many happy memories here.” 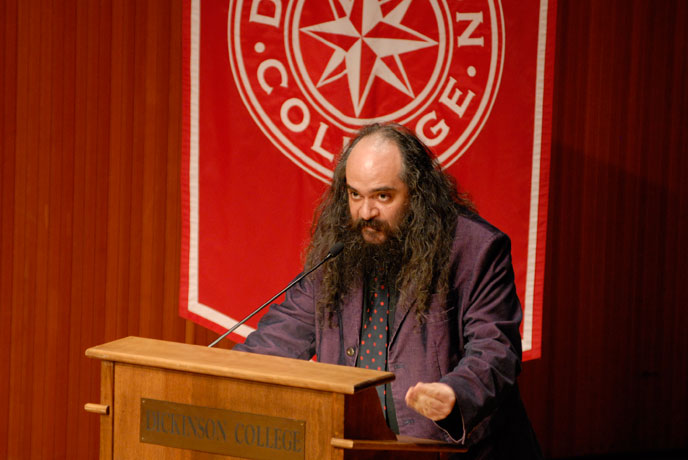 The next writer in the lineup is Russian poet, songwriter, scholar and journalist Psoy Korolenko, aka Pavel Lion, who recently published a book of lyrics and essays, Shlyager Veka (The Hit of the Century), and has released numerous CDs, collaborating with musicians from around the world.

Korolenko returns to Dickinson for a repeat residency Oct. 2-7, after performing during Dickinson’s Semana Poética festival five years ago (while visiting, he delivered a memorable impersonation of French singer Edith Piaf in the Quarry). Writing and performing in English, Russian, French, Hebrew and Yiddish, he will work with students in language and Judaic studies classes throughout the week, and on Wednesday, Oct. 4, he will present a multilingual public concert that interweaves elements of rap, sound poetry and Russian, European and Yiddish folk song and theatre.

Interarts events like these can open new worlds in ways that move far beyond traditional classroom learning. Kohler’s semiautobiographical short stories, for example, plumb universal themes, like procrastination, milestone birthdays and Internet culture, but also describe cultural conundrums. These include the difficulties of finding a roommate as a Berlin student, the strangeness of being a German bridesmaid in an American wedding and the comedic frustrations on the job in a European candy store in the age of fair trade, gluten-free, sustainable and healthy eating. ("A lot of this is true, unfortunately," she told the audience with a droll smile.) She also answered questions about her experiences as a young professional and artist in Berlin and touched on the ways in which creative writing instruction in Germany differs from that in America, where professors focus more on technique.

“She did a great job, and it was good to hear her stories about contemporary topics [in Germany], after living there,” said Caroline Pappalardo ’18, a political science major who recently returned from studying abroad in Kohler’s homeland and attended the reading with fellow returning study-abroad student Kayla Stepanchak ’18 (German, international studies).

“Right now we’re taking a class in 18th-century German literature, which is interesting, but her stories were more relatable,” agreed Stepanchak, who laughed in recognition when she heard Kohler describe maddening customer service experiences in Berlin. “They give you an idea of what life there is like.”