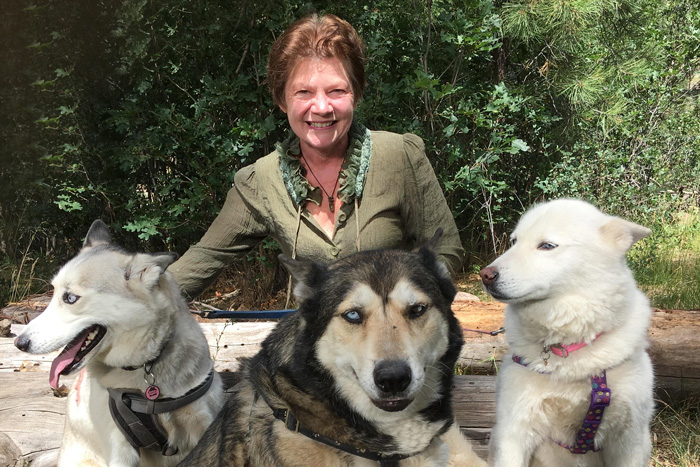 After retiring from a successful career in law, former political science major Lisa Toy ’80 followed her heart by opening Misha Siberian Husky Rescue, a nonprofit whose sole purpose is to save huskies from high-kill shelters in six states. With love and compassion, she rehabilitates and rehomes these abandoned and abused animals.

I am a first generation college graduate. It was not easy for me growing up in a small town in a large family with working-class roots. There were times when I felt separate and apart from the community. I did not know what my future would hold or where my path would lead me, but I knew I could not remain where I was raised. And so I actively sought a different life and a way to get there. I reached out to Dickinson, and Dickinson responded with grants that would assist me with the financial means to allow me to see a whole other world. It would be challenging, but Dickinson was patient and taught me how to look at life and its myriad issues with a broader perspective, to have several and various approaches to problems and to appreciate alternative lifestyles and cultures. Most importantly, Dickinson offered hope for a rewarding path, if I just believed in my potential and myself. Dickinson made me believe in possibilities.

Modern dance. It gave me the opportunity to be creative and to express myself. I had always wanted to take ballet lessons growing up, but my family could not afford them. I loved the dance practices and recitals—and being with kindred spirits.

Being able to study abroad in Bologna. That is by far one of the best experiences of my life. I was able to travel to most European countries, experience different cultures, learn different languages, eat fantastic food, mingle with the locals and sleep under the stars in Greece.

Besides spreading the word out West about Dickinson and the opportunities afforded to me, I read the Dickinson Magazine voraciously with news of what is changing with the campus. I am so proud of the ethnic diversity, the willingness of Dickinson to embrace not only different cultures, sustainable living and individual rights, but also the college's acceptance and appreciation of successes of alumni that might not fit the norm. It is important for upcoming generations to have respect for diversity and to believe anything is possible.

When I opened my law practice, I focused on real estate and transactional work, anything to stay out of the courtroom. However, when the recession hit, real estate floundered, and our chief district court judge asked me to represent children in dependency and neglect cases as a guardian ad litem. The need was great. I reluctantly agreed, and with my hesitation cast aside, I proceeded to enter the court arena full swing. For the next 12 years, child advocacy became the focal point of my law practice. It was rewarding, and I was good at it, because I could remain objective, something that Dickinson also taught me. I practiced law while riding my horse on forested trails and canyons near my house or running huskies in the wilderness, which gave me peace of mind and that rejuvenated my soul. I entered my appearance many times in the Colorado Appellate and Supreme Courts, and I won for the children. However, the real work for me—and what ultimately became my passion—was in 2004 when I rescued a beautiful black and white Siberian husky off the road in Espanola, N.M., who was at risk because she killed a pet goose. Misha, as I named her, became my soul mate and showed me that other misunderstood huskies needed rescue. In 2011, I formed a nonprofit called Misha Siberian Husky Rescue, whose sole purpose was to save huskies from high-kill shelters in Colorado, New Mexico, Kansas, Texas, Oklahoma and California. I rescued beautiful dogs, purebred and mixed breed, some so very sweet and some aggressive. Believing that all creatures deserved to live, despite what abuse or neglect they may have encountered—and, once again, believing in possibilities—I rehabilitated and re-homed them. One in particular, who bit several people—including me—is now a therapy dog, helping his human when she is about to go into a seizure. I am humbled and grateful for the opportunity I have been given to save the lives of both children and animals.

I am retired now from law, and so rescuing huskies continues to be my passion. I exercise my dogs in the San Juan National Forest daily, and at times we hike into the Weeminuche Wilderness. If you have never ventured into a place where the forest speaks to you in silence, where the paths are unknown, and the rivers run crisp, clear and rapid, or the coyote, fox, bear and mountain lion stop, stare and understand you will not harm them, I wish for you the opportunity to see a different way of life. I have been five feet from a bobcat that did not feel compelled to escape, have stood up to and yelled at an eight-foot bear that approached my front porch looking for food, have looked in awe at eagles above and wished I could fly with them. I have sat in the presence of majestic 200-year-old Ponderosa pines while the deer and elk passed without fear.  I take my huskies into the forest annually to cut down our Christmas tree, harnessing my oldest male and, because we are both older now, helping him drag it out on new fallen snow. I feel utterly safe and at peace in the forest. That is my work now, to be still and listen, love my huskies, and save and rehome as many as I can.

At this point, the most challenging aspect of my life is finding the funding to assist with rescue. There are so many animals in need, and high-kill shelters still exist. Gas chambers to euthanize dogs still exist. Dogs are euthanized at shelters simply because there is no space. Backyard breeders have to be more regulated and their activities curtailed. Besides contributing to animals in over-crowded shelters, the health issues that result from such uncontrolled breeding are phenomenal. It is a challenge for me to wake up every morning and see a husky needing rescue, and I am without the time and funds to help.

It would be Katharine Hepburn. She was tough, strong willed, smart and sassy. She was instrumental in paving the way for women in entertainment, despite suffering enormous setbacks and losses. In her later years, she would champion kindness, tolerance, respect and better care for the elderly, something we still need today, even more.

I would travel to the West in the 1800s. The West is where I am drawn, and I feel certain I have lived here before. I would like to see how I learned to live sustainably, with respect for nature, animals and all the wilderness has to offer. It is how I live now.

That I could have saved the life of that one dog that I could not save.