Learning from the Masters 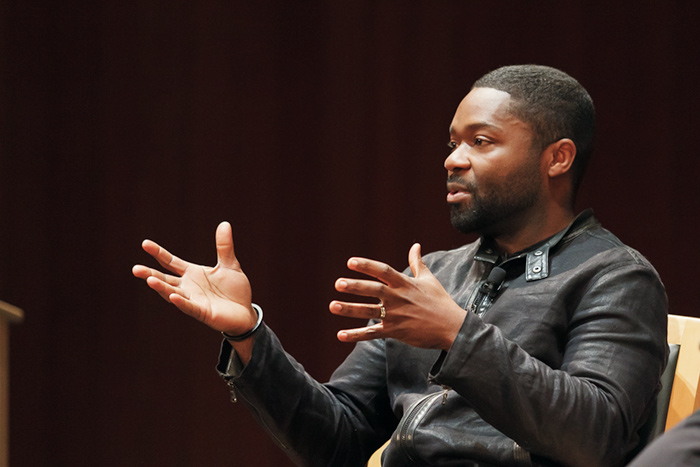 There may be no more combustible contemporary issue than immigration, and few can offer a more multidimensional perspective on it than David Oyelowo. The award-winning actor-activist sparked campuswide discussions around that hot-button issue when he visited Dickinson in March.

Oyelowo is one of the distinguished scholars and public figures who came to Dickinson during the spring semester to accept a named lectureship award. While on campus, honorees deliver public addresses and work closely with students in small group settings, offering professional advice to those interested in similar career paths.

Oyelowo (Selma, Nightingale, The Butler, A United Kingdom) came to Dickinson through the Poitras-Gleim program, endowed by a gift from Ted and Kay Gleim Poitras ’53 and held in conjunction with the Student Senate-led Public Affairs Symposium. As this year’s Poitras-Gleim lecturer, he joins a stable of luminaries, each tasked with promoting cross-disciplinary learning by speaking outside of their widely known area of expertise. These include writer/activist Betty Friedan, former NFL player Wade Davis and Star Trek icon George Takei.

Speaking with students in environmentally minded majors and clubs, LaDuke shared lessons learned from her long career on the front lines of environmental justice advocacy. She added firstperson perspective to a national conversation about current events when she related her experiences joining the Dakota Access Pipeline protestors at the Standing Rock Sioux reservation in North Dakota. LaDuke also delivered a public address on a new energy economy.

And, as Dickinson’s food studies program marks its first year, two scholars served up different flavors of this far-reaching topic.

Leading food historian Jeffrey Pilcher of the University of Toronto delivered the Pflaum Lecture on the history of taste, as both a sensory perception and a social category. Supported by a fund established in memory of John Pflaum, a Dickinson professor, the program has brought noted historians to campus, including Conrad Crane, Daniel Walker Howe and Donna Gabaccia.

Kelly Brownell, an obesity expert who’s advised Congress, the White House, governorships and media leaders, spoke about how scientists and social scientists can use their work to help alleviate social problems at the policy level. Brownell was the recipient of this year’s Joseph Priestley Award, presented in honor of the discoverer of oxygen—a close friend of Benjamin Rush—to a distinguished scientist whose work has contributed to the welfare of humanity. Previous recipients include 15 Nobel Laureates and the dual Nobel Prize-winning chemist Linus C. Pauling, as well as famed astronomer Carl Sagan and anthropologist Margaret Mead.

Meghan Shippe ’18, a varsity squash player and double major in psychology and philosophy, was one of many students who seized the chance to meet with and learn from visiting experts this year. After reading Brownell’s research while studying treatments for disordered eating, she got to meet with him in small groups, in and out of class.

“I cannot imagine that many of my friends who go to other colleges or universities get to have this kind of experience,” said Shippe, who plans to pursue a Ph.D. in clinical psychology. “That is something that is so special about Dickinson.”