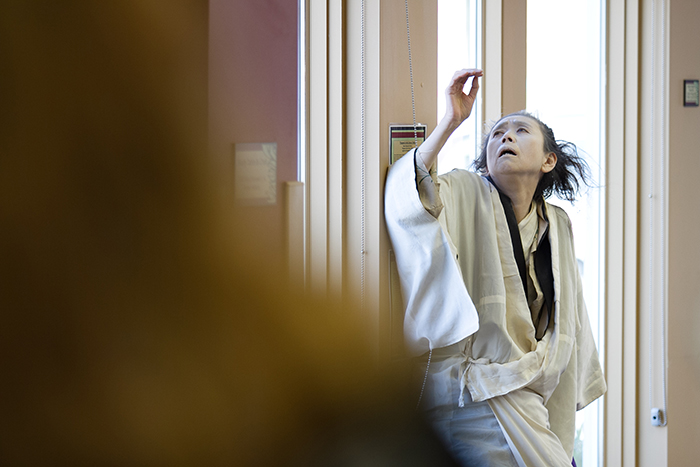 There's a stranger on the floor. She’s barefoot, and she moves with dazed deliberation—like a dying housecat, still listening for birds. When you take a step forward, she rises—beautifully, horrifically, a ghost in a dream—and looks at you, and keeps looking. She seems to draw energy from this: Does she even see you? Maybe she sees everyone who’s ever stood in this spot. Maybe she sees nothing at all. When she darts off, you feel your whole body relaxing, but you follow her, not knowing why.

You’ve witnessed Eiko Otake, the well-known performance artist who just served an intense residency at Dickinson, “occupying” public spaces, on and near campus, with her searing otherworldliness. After more than 40 years in the spotlight, she’s presenting a work that, she says, is “perfect for an old person,” given that it could nudge the 65-year-old imperceptibly closer to death.

‘At some point, I decided not to look’

It's a haunting response to the triple meltdown at Japan's Fukushima Daiichi nuclear power station in March 2011. Otake traveled to her native country soon after the incident in 2011 and returned to Japan in 2014 to dance in the evacuated no-entry zone. (“It’s so contaminated that they can’t have anyone stationed on the border to prevent you from entering,” she explained.) Her traveling companion was William Johnson, a historian who co-taught a course with Otake on the atomic bomb; three years after the Fukushima disaster, they were stunned to find bagged radioactive refuse still piled up on the streets and a tangle of weeds choking the train tracks. Upside-down boats and debris littered the shoreline.

“I knew there was radiation, and I brought a Geiger counter,” Otake said, during a public address at Dickinson, “but at some point, I decided not to look.” 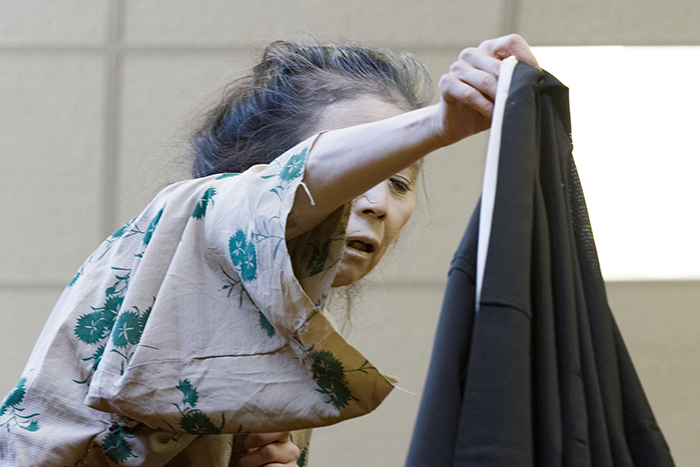 Johnson took photos of Otake’s improvised, barefoot dances at contaminated train stations—“miserable, but not without beauty,” she said—and at shrines, forests and beaches, also within the evacuated zone. “Nobody was watching me, except for a camera, and very strange things happened. I started to feel the generations of people who had been there … I have never been so aggravated in my life.”

The photographs are now an exhibition, a companion to Otake’s performance. She’s presented it in train stations and storefronts; in an East Village cathedral, where she’s serving an artistic residency; at the sites of disaster and protest in Japan and Hong Kong; and in Santiago, Chile. And, just weeks after a festival in New York marking the sixth anniversary of the Fukushima incident, at Dickinson.

Visiting campus during the first week of April, Otake performed A Body in Places in the Waidner-Spahr Library and the nearby Bosler Library, donning the costume she wears in Johnson's photos, and incorporating her environment—books, stairways, an elevator, window blinds—into the work. The veteran dancer/choreographer and college lecturer also visited theatre & dance, literature and East Asian studies classes; shared meals with faculty members and students; and offered a public presentation.

“I’ve never seen anything like her,” said Rehoboth Gesese ’17 (political science, philosophy), a student-project manager for The Clarke Forum, which sponsored the April 6 public lecture along with the theatre & dance, women’s, gender & sexuality studies and East Asian studies departments. 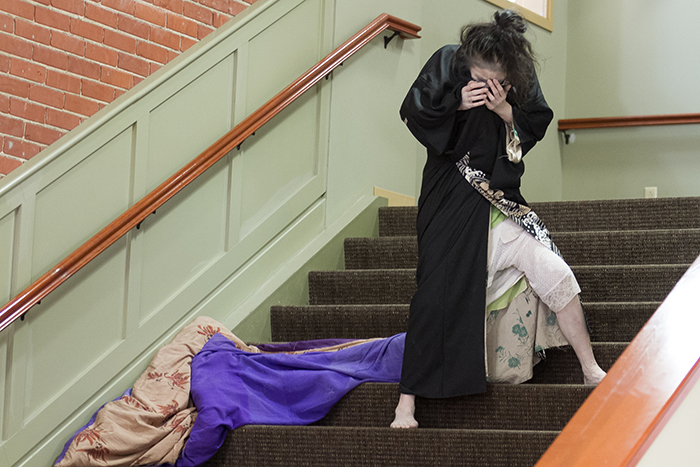 “She reminded me, actually, of Charlie Chaplin, and his way of renewing the existence of the things he interacted with,” says Noah Fusco '18 (English, theatre arts).

‘Nowadays, Fukushima is my middle name’

The experience gave fellow dance students Sean Jones ’17 (physics) and Alex Dillon ’17 (East Asian studies) new ways to think about and create art. Dillon, who appreciated Otake’s "subversion of outdated ideas about what a performance or stage is," added that, two years after he wrote a paper about the Fukushima Daiichi incident for an environmental politics class, he now has a deeper understanding of the subject: “It was difficult for me to really conceive of the devastating impact that this event had had on Japan," he says. "It was only through seeing Eiko's images and hearing her stories do I truly realize the severity of the problems surrounding nuclear power.”

Otake says that’s the beauty of presenting photos, video and other contextual information alongside her emotionally charged performances. While her disarming dance communicates the sheer horror of a nuclear incident, she also wants audiences to better understand the nuclear disasters that have happened, and those that might. That includes getting up to speed on the Japanese government's evolving responses to the Fukushima disaster.

"That's why I'm doing this work," she said, adding that, to remain current, she plans to return to northern Japan next summer. “Nowadays, Fukushima is my middle name.”