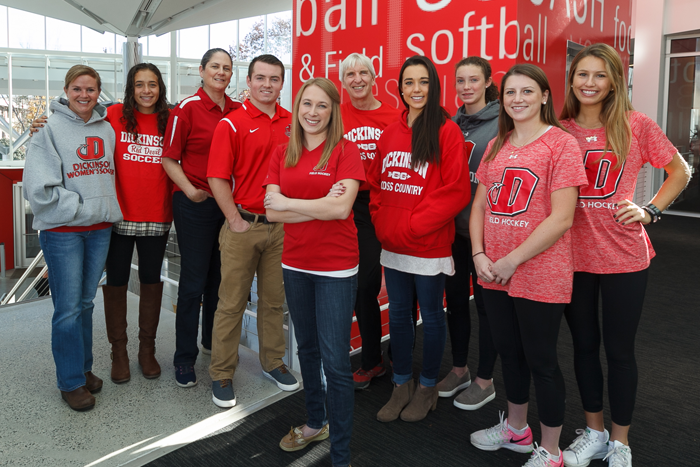 There are many challenges facing collegiate-level student-athletes—longer seasons than they’d experienced in high school, more intense training sessions, team study halls, traveling for away contests and higher stakes—all in addition to classes and extracurriculars. Coaches and teammates help, but for some, extra support can mean the difference between struggle and success.

The Faculty Wear the Red program addresses that need by pairing faculty mentors with Red Devil teams. The mentors collaborate with coaches to provide an additional layer of support for student-athletes as they juggle the demands of on-campus life.

“It allows for faculty members to really experience a day in the life of a Dickinson student-athlete,” says Jenny Smith ’17, a psychology major and member of the women’s basketball team, “and it’s beneficial for both parties, because it develops a better understanding of the dedication to both academics and athletics the student-athletes have.”

Proposed by the Student-Athlete Advisory Committee (SAAC) and launched last fall, Faculty Wear the Red is coordinated by the Department of Athletics in conjunction with the Office of Academic Advising. Mentors may commit to one season or longer and attend practices and games as able. Whether they cheer on their students strictly from the sidelines, or work out alongside them, they make a lasting impression.

Claire Taben ’20, a fellow SAAC officer and field hockey defender, says that Assistant Professor of Economics Emily Marshall has made a big difference both on and off the field. As an experienced former player and assistant coach, Marshall offered tips on Taben’s technique and helped her strike the right tone in an email to a professor.

Visiting Professor of Political Science and Security Studies Craig Nation, the men’s and women’s cross country mentor and former student-athlete himself, believes strongly that as mentors partner with coaches to help their student-athletes build valuable skills, they gain a fuller understanding of what it takes for the student-athletes to thrive. As a result, they may discover how to better understand this portion of the student population.

James Ward ’17 is a wide receiver, SAAC member and economics major, and he’s quick to note that Assistant Professor of Political Science David O’Connell made it to every home football game and most practices and has hosted players at his home for dinner and Monday Night Football.

“I have seen firsthand how hard the players work on a day-to-day basis, and I think that’s different from simply being aware of the fact that they are members of an athletic team,” says O’Connell. “I see players giving their all for the duration of a long practice, and then I know that some of them are going to have to go home and work on a paper for my course later that night. Seeing this through their eyes makes an impact on you.”