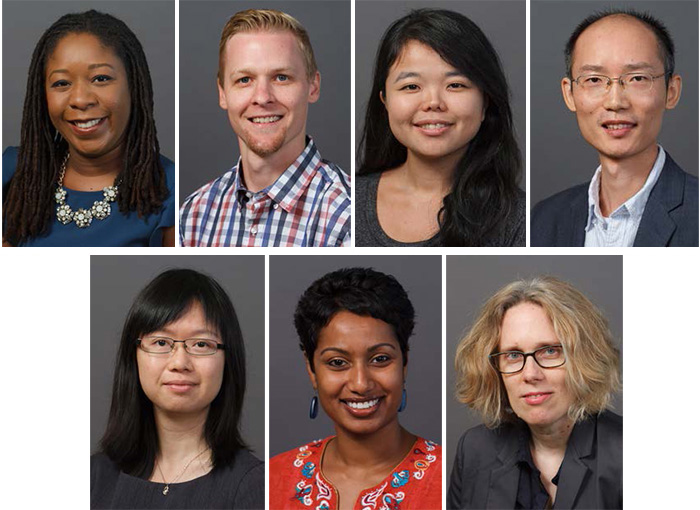 Dickinson welcomed seven new tenure-track faculty members to the campus community this year. Check out their profiles below.

Her current research interests include environmental health, air pollution and air quality monitoring. She will continue her work on air quality at Dickinson with a focus on local air pollutants and adversely affected communities.

Bai’s current research focuses on the relationship between firm value and patent-based indicators of technological innovation. She also has published journal articles on financial innovation, including leveraged ETFs, credit default swaps and Bitcoin.

Before coming to Dickinson, Bai taught a variety of finance classes at the University of Cincinnati and University of Wisconsin–Eau Claire. Her teaching centers on helping students connect finance theory and practice with classroom games in which students make decisions and interact. At Dickinson, she will be working with students on understanding how sustainable buildings drive real estate value.

Lila Ellen Gray holds a Ph.D. in cultural anthropology (2005) and an M.A. in music (2000) from Duke University, as well as a B.A. in humanities from New College of Florida (1993). Her teaching and research interests include urban ethnomusicology, sound studies, gender, peripheral early music, vocality, Portugal, the Lusophone world and Europe’s South.

Gray’s book, Fado Resounding: Affective Politics and Urban Life (2013, Duke University Press), is a musical ethnography of fado, Portugal’s most celebrated musical genre, and was the recipient of the 2014 Woody Guthrie Award of the International Association for Popular Music (IASPM-US). Her present work concerns European early music communities; amateur musicianship and mass tourism; and the labors of sound, heritage and the senses in the context of multiple forms of crisis across Europe’s South. Publications include articles in Ethnomusicology, History and Anthropology and Anthropology and Humanism. She previously taught at Columbia University and at the University of Amsterdam.

In the classroom, she teaches postcolonial, Asian American and indigenous literature, focusing on how texts are shaped by their sociopolitical contexts.

Naila Smith received her Ph.D. in applied developmental psychology in August 2016 from Fordham University, where she was the GSAS Higher Education Leadership Fellow and a senior teaching fellow. She holds a B.Sc. from the University of the West Indies (Mona) and an M.A. in developmental psychology from Teachers College, Columbia University. Her research examines how social and contextual factors, such as parent and peer relationships and classroom climate, influence academic and socio-emotional development from childhood through emerging adulthood. Her work focuses primarily on these developmental processes in immigrant and racial-ethnic minority populations. Most recently, she has published on microaggressions in community-college classrooms.

As an Emerging Scholar blogger for the Society for Research on Adolescence, Naila participates in what she enjoys most about the academy: collaboration and engagement with colleagues. In her blog posts, she shares reflections, insights and resources on professional development.

Nicholas Soderstrom received his Ph.D. in cognitive psychology from Colorado State University and completed a postdoctoral research fellowship at the University of California, Los Angeles. Soderstrom teaches classes in human cognition and has active lines of research in the areas of human learning and memory. He has been recognized for his excellence in both teaching and research, and his scholarship has been published in a number of the top peer-reviewed journals in his discipline.

Soderstrom is interested in how people learn versus how people think they learn, and is deeply committed to applying the science of learning to enhance the educational practices of both students and instructors. In addition to teaching and conducting research, Soderstrom serves as an active liaison between learning scientists and the general public by writing books on how to optimize learning and giving talks to educators about how they can incorporate effective learning techniques in the classroom.

During his doctoral study and before joining Dickinson, he was a visiting researcher at the Department of Sociology at the University of Wisconsin-Madison and, later, at the Population Studies Center at University of Pennsylvania. He was also a business consultant for the IT company Menusifu Inc.

He has published on the statistical methods of causal mediation analysis and on modeling the pricing behavior of firms under various market uncertainties. His research interests include economic sociology, causal inference, social statistics, social inequality, organization and mathematical sociology.