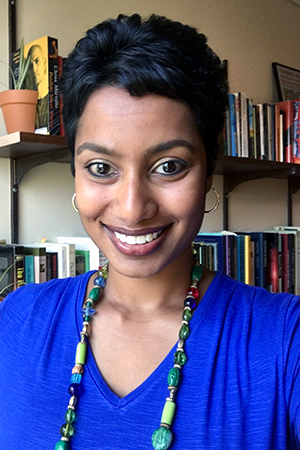 Sheela Jane’s research centers on questions of race and identity in Malaysian literature and culture, and is informed by her upbringing in Malaysia, Singapore, and Honolulu. Her current book project, Malaysian Multiculturalism: Reading Race in Contemporary Literature & Culture, analyzes a new cultural archive from Malaysia consisting of Indigenous (Orang Asal) oral histories and multimedia texts, as well as novels, films, and public performances by Malay, Chinese, and Indian artists. This project examines how cultural producers are reimagining multicultural citizenship across a diverse range of genres and contexts. Her work has been published in ARIEL: A Review of International English Literature, Verge: Studies in Global Asias, The Diplomat, The Conversation, and The Malaysian Insider. In the classroom, Sheela Jane teaches Asian American, Postcolonial, and World Literature, focusing in particular on histories of colonization and decolonization, and the modes through which writers articulate agency and creativity. Sheela Jane was appointed to Governor Tom Wolf’s Advisory Commission on Asian Pacific American Affairs in December 2019.

ENGL 101 Asian Am Lit & Pop Culture
What happens if we place Asian American writers and cultural produces at the center of American history and culture? This question will guide our examination of 20th and 21st century Asian American poetry, short stories, and novels. Through the work of writers including Ocean Vuong, Carlos Bulosan, Chitra Banerjee Divakaruni, John Okada, Nam Le, and lê thi diem thúy, we will analyze how literary texts articulate diverse experiences of life in America. We will also engage with a selection of cultural texts including films, OpEds, podcasts, and blogs to unpack how Asian American popular culture reimagines American identity. In learning how to close read these texts and situate them in their historical and literary contexts, we will simultaneously examine how systems of power tied to race, gender, class, citizenship, and religion have shaped communities throughout the United States.

ENGL 321 Lit of Migration & Displacemnt
This course examines contemporary literature that has emerged from complex histories of displacement, migration, war, and exile, and analyzes how these histories continue to shape texts and communities around the world. We will focus on 20th and 21st century literature that spans countries including: Palestine, Syria, Central America, Vietnam, the United States, and the United Kingdom. Our readings may include: Susan Muaddi Darraj’s, The Inheritance of Exile (2007); selections from Syria Speaks: Art and Culture from the Frontline (2014), edited by Malu Halasa, Zaher Omareen, and Nawara Mahfoud; Valeri Luiselli’s Tell Me How it Ends (2017), and Viet Thanh Nguyen’s The Sympathizer (2016). Guided by Postcolonial and Cultural Studies methodologies, we will examine how race, class, gender, and politics influence the movements of people across the globe.