The Elite of the Elite 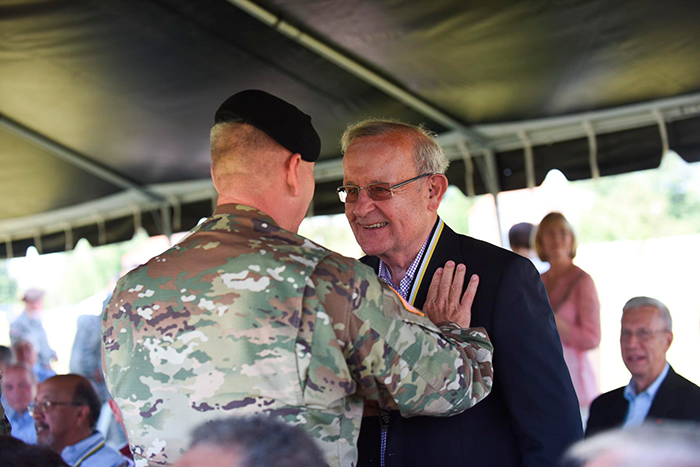 Since its founding 100 years ago, the U.S. Army ROTC has commissioned over 650,000 second lieutenants. In June, the U.S. Army Cadet Command welcomed 326 of those former cadets into its Hall of Fame’s inaugural class, which included some of the nation's top leaders, from generals George C. Marshall and Colin Powell to U.S. Supreme Court Justice Samuel A. Alito Jr. and U.S. Rep. Ladda Tammy Duckworth of Illinois. And three members of this elite group were Dickinsonians: John Curley ’60, Maj. Gen. (Ret.) David Meade ’62 and Col. (Ret.) Sherwood “Woody” Goldberg ’63.

Dickinson also was among only a handful of colleges or universities to field more than one inductee. “It is an honor to be part of the first group, and I’m especially pleased that Dickinson has three honorees,” Curley said. “It’s a big deal.”

From calisthenics to command centers

Curley, who majored in political science, worked as a public relations officer, attaining first lieutenant rank before leaving active duty. He earned a master’s degree in journalism from Columbia University and then went on to work for Gannett Company, becoming the first editor for USA Today. He became president and CEO until his retirement in 2000. Curley also served on Dickinson’s Board of Trustees, including as chair 1998-2008.

An economics major, Meade served the U.S. Army for 39 years in multiple command capacities, retiring as commander of U.S. Troop Support Command. He led a battalion and regional support activity under combat conditions in Vietnam as a lieutenant colonel and commanded for nine of his last 12 years in the Army. He later worked for Raytheon Corp. and received the Army’s Outstanding Civilian Service Award for his work on the Patriot Missile System during both Desert Shield and Desert Storm.

Goldberg, who served two tours in Vietnam and twice earned the Bronze Star for valor, was one of the 100-plus inductees who attended the ceremony at Ft. Knox, Ky. Goldberg majored in political science and later earned a master’s degree at University of Pennsylvania and a J.D. from the Temple University School of Law. He served for 25 years as chief of staff and senior advisor for former Secretary of State Alexander Haig. He currently is senior advisor for Asian affairs at the Center for Naval Analysis and serves on the Board of Trustees for Dickinson and the West Point Jewish Chapel Fund.

“I was especially proud to represent John Curley and David Meade as fellow graduates of our program,” Goldberg said. “One could not but reflect with pride what the program, its Blue Mountain cadre and the college’s leadership—including the Board of Trustees—have made possible over the years for me and other graduates career-wise.

"Our fellow inductees were nominated for the honor as alumni by their respective ROTC units," he continued. "It truly was a grassroots nominating process; that our own Dickinson ROTC cadre nominated us is why this honor means so very much.”

“The Army strives to develop selfless leaders who can build teams that win in complex environments," he said. "We find ways to expose cadets to new environments, from leveraging opportunities for them to engage with cadets around the country to providing summer foreign exchange programs and challenging them in weekly leadership labs."

The infantry officer, who served multiple overseas tours, including in Afghanistan and Iraq, and who earned a bachelor’s in international relations and two master’s degrees—theatre operations and English—cites the importance of being able to inspire people and navigate a wide variety of cultural situations. He notes that a liberal-arts education combined with ROTC is ideal preparation for future leaders—military and otherwise.

Goldberg concurred. “It was ROTC that set us on firm grounding to serve however long and then to pursue careers in civilian life, continuing to give back for the opportunities afforded us through ROTC,” he said. “The fact that cadets graduate from civilian colleges and universities serves a vital link between our military and civilian communities. They’re products of civilian institutions, thereby maintaining the all-important civil-military relationship, which is central to our democracy.”