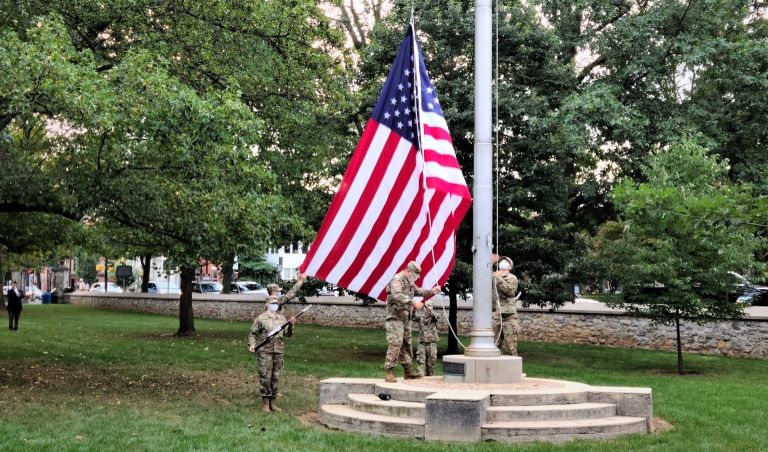 A Proud History, A Bright Future

Dickinson College and the Carlisle Area have a rich military heritage. Fort Louther, located on Courthouse Square, was one of Pennsylvania’s frontier forts.

In 1758 and 1763, General John Forbes and Colonel Henry Bouquet launched successful military expeditions from here to the area of present day Pittsburgh. Carlisle Barracks, currently home of the U.S. Army War College, is the oldest military installation in the United States Army and served as an ordinance factory in the Revolutionary War.

In 1794, Carlisle served as the assembly area for the militia units gathering to put down the Whiskey Rebellion in western PA, and President Washington reviewed the troops where Denny Hall now stands. Before the American Civil War, Dickinson graduated a president of the U.S. (James Buchanan), Secretary of War (William Wilkins), and one of the nation’s first winners of the Congressional Medal of Honor (Horatio King).

During the Civil War, Carlisle was briefly occupied by troops of the Second Corps, Army of Northern VA just days before the battle of Gettysburg. Later, as the battle was raging in Gettysburg, Carlisle would be bombarded by the Confederate cavalry and the Barracks put to the torch. Moreover, Dickinson students and graduates served on both sides, while their alma mater was used as a military hospital.

In the days of the Continental Army, the officer corps was mainly made up of defecting British officers and wealthy men who could raise their own companies. While this system did help the United States gain independence, it was not able to supply enough quality officers to guard the frontiers of the new republic from rebellions and raids. Even as far back as 1783 there were proposals from the Governor of New York to have military instruction classes on College campuses. Eventually in 1802 the United States Military Academy, better known as West Point, was established in New York to educate and train a corps of young officers to protect the Nation's interests. Efforts to get military instruction into regular colleges continued and in 1801 Georgia University began its own military education at its institution. Widespread instruction of military science on College campuses did not start until the “Land Grants Act” in 1862, during the Civil War. The “Land Grants Act”, amongst other benefits, granted the sale of Federal lands to found new Colleges and Universities on several conditions, one of which was the inclusion of military instruction.

In the 20th century, Dickinson hosted Students Army Training Corps Units during World Wars I and II as precursors to the establishment of our Army ROTC program during the height of the Korean War in 1952. At this time there were 253 programs across the country, producing 12,000 officers every year! Establishing itself early as a major force on campus, the program grew in enrollment and activities. In the fall of 1956, the Perishing Rifles and association of the U.S. Army companies were founded. Replete with pageantry, including saber arches and ball queens crowned by the college president, the military ball was the first major social event of the college year. A drum and bugle corps accompanied the drill and the Perishing Rifles marches in numerous parades and gathered many trophies. At its peak in the early 1960’s, over 20% of the student body was enrolled and over 25% of the males in each graduating class were commissioned. As late as 1972, the program was still commissioning over two dozen officers per year.

The Vietnam and late Cold War decades brought about substantial change. Enrollment decreased, precipitated by the ending of conscription and the national disillusionment with the Vietnam experience, helping to expand the number of schools in the Battalion. In the ‘70’s, students were enrolled from Harrisburg Area Community College, Shippensburg, and Penn State–Mount Alto, leading to cross enrollment agreements being formalized with Shippensburg and Penn State–Mount Alto in 1975. The program was such a success at Shippensburg that in 1978 it was designated as a full extension center and in 1981 became an independent program. As the ‘80’s progressed, formal cross enrollment agreements were in place with Harrisburg Area Community College (1982), Penn State Harrisburg (1981) and Lebanon Valley College (1984). Restored national pride, academic respect, the scholarship program, and the maintenance of academic credit for most ROTC courses laid the foundation for a small but stable program. In 1984, visibility for the Battalion was increased when the program moved into a separate facility at 450 West High Street in the middle of campus.

The end of the Cold War and Persian Gulf Conflict brought about intense national debate on the proper size and role of the Army. This debate and the results of the downsizing of the Armed Forces caused fluctuations that continue to this day. In 1994, the scholarship program was redesigned to both increase the overall number of scholarships available and provide a set amount of money as opposed to a percentage of tuition. Although, initially believed that this change would hurt enrollment at schools such as Dickinson, it has had the opposite effect. Despite the fact that the individual student receives less, we are now better able to reward many more deserving cadets. In 1995, interest and participation in general, and the Blue Mountain Battalion in particular, was increasing tremendously. Enrollment came from a low of 57 cadets to 79, with more promise for the future. In the spring of 1996, Dickinson was added to a list of 25 prestigious schools designated as Tier IA. This designation identifies those schools that offer up to ten scholarships per year valued at 20,000 dollars and up. To show its dedication to maintaining a vibrant ROTC program and presenting the U.S. Army with exceptional future officers, Dickinson College offers all incoming freshman scholarship Cadets one of three merit awards ranging from 6,000-15,000 dollars per year.

As 1997 dawned, the Army had demonstrated its commitment to the Blue Mountain Battalion by assigning the largest active duty cadre since before the Vietnam War. On all campuses, the program expanded administrators, admissions officers and faculty work with us to provide the best young leaders for the 21st century. Between 1998 and 2003 ROTC at Dickinson College and the Blue Mountain Battalion flourished. With enrollment increasing by over 25 percent on all campuses, in 2002 the battalion exceeded its requirement to produce twelve lieutenants annually for the first time in nearly a decade. With this, the Battalion’s national ranking by U.S. Army Cadet Command soared. Dickinson ranked in the top 15% of all 273 ROTC programs nationwide for the 2003-2004 academic-year.

By 2008 Gettysburg College reached a cross enrollment agreement with Dickinson College and joined the BMB. Gettysburg College traces their military legacy back to the Civil War, and formally established their “Blue and Grey” Battalion in 1922, which lasted until 1991 when the post Cold War drawdown forced the program to disband. After a nearly two decade hiatus Army ROTC returned to campus, and in 2011 with the repeal of DADT, the College decided to review its policy denying college credit to students receiving ROTC credit, so that all cadets now fully participate in Dickinson’s consortium agreement. This merged Gettysburg’s long history under the Blue Mountain Battalion

Today, the Dickinson Army ROTC’s Blue Mountain Battalion consists of Gettysburg College, Penn State Harrisburg, Millersville University, Franklin & Marshall, and Messiah University. The program has exceeded the Army’s mission of 15 lieutenants every year since 2014. In 2022 the BMB will be celebrating its 70th anniversary and Gettysburg College will be celebrating its 100th anniversary of the founding of its ROTC Battalion.