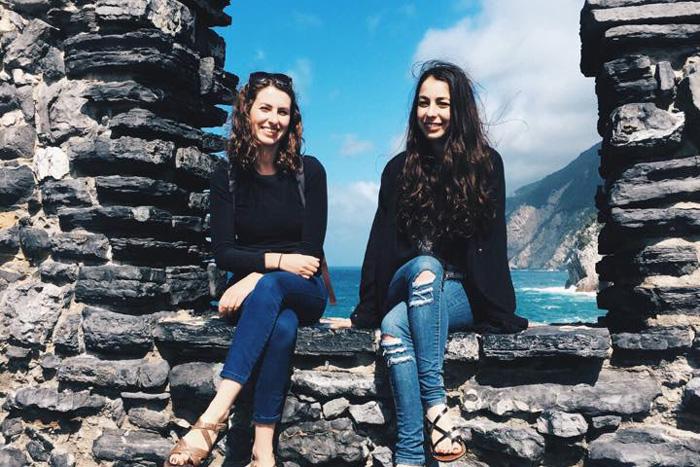 In the Cinque Terre region of Italy, Sasha Shapiro (right) takes a quick break with her sister, Anya.

This fall, Sasha Shapiro ’15 is headed to the University of Virginia through one of the country’s most highly selective merit graduate fellowships, where she’ll put her Dickinson degree to good use in the Department of Slavic Languages.

“It seems that very few people have explored Russian bioethics, so I may be one of the first in my field doing this research,” the former Russian and philosophy major says, noting that the subject became an interest of hers early on while at Dickinson. “I was trying to find a way to connect my two interests, and I particularly wanted to focus on Russian treatment of death and end-of-life care. I’ll be focusing this interest specifically in literature and film, but I hope to look to the policy and sociological sides of this issue throughout my career.”

The Jefferson Fellowship she’s been awarded will endow Shapiro with full funding to pursue graduate studies in the University of Virginia's Graduate School of Arts & Sciences, where she’ll be pursuing a Ph.D. in the wake of a rigorous three-day interview process that began with 60 applicants competing for just 12 slots.

“As soon as I finished my presentation before the Jefferson Fellow panelists, I had a very good feeling I had been awarded the fellowship,” she says. “And I think it was just because I had a great time presenting on my topic: conceptions of end-of-life in Alexander Solzhenitsyn's Cancer Ward.” The book tackles such ideas as what it means to truly live, how death puts one’s life into perspective and how important one's choices are at the end of life.

“I know it’s a very depressing topic, but I've noticed that everyone shies away from it because of its inherent emotional value,” says Shapiro, who will be working with University of Virginia's medical school as part of her fellowship. “I think that by studying this distressing issue and staring the problem in the face I could help make someone's end of life not so emotionally painful.”

Shapiro participated in the Dickinson in Moscow program, and she points back to her time abroad and in the classroom as foundational elements of her future studies.

“I really don't think I would be doing a Ph.D. in Slavic languages and literature if I had not gone to Dickinson,” says Shapiro, who says Associate Professor of Russian Elena Dúzs and Assistant Professor of Russian Alyssa DeBlasio helped form the backbone of her undergraduate support system. “Dickinson's liberal-arts curriculum encouraged me to delve into an issue I was interested in and tackle it from all directions, and I learned the value of deep thinking.”