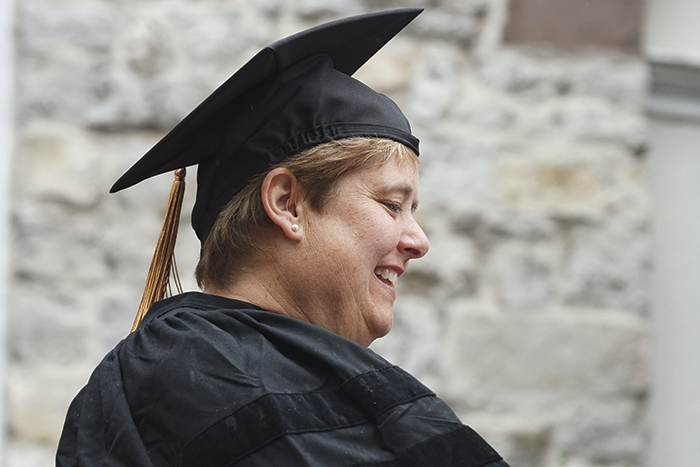 At the 2016 Commencement, Elaine Livas ’83, who majored in anthropology and minored in Russian studies, received an honorary doctor of public service degree for her work as founder and executive director of Project SHARE, an interfaith cooperative effort involving over 66 local congregations, schools and civic organizations. More recently, Livas founded PET Carlisle (personal energy transportation), which builds hand-powered carts for people with disabilities. Editor Michelle Simmons recently talked with Livas about her Dickinson experience, her work and her inspirations.

MS: How did you decide to come to Dickinson?

EL: I’m from New England; I went to Glastonbury High School in Connecticut. My parents did not believe in free time; they didn’t believe in study hall. And at the time, there were a lot of Russian skaters coming to train in Connecticut. So, I had a choice between study hall and a Russian language class. Of course, I started taking Russian. When I was looking for a college, I wanted someplace that taught Russian language.

MS: It sounds like, when you first arrived at Dickinson, you weren’t planning to stay in Carlisle.

EL: I don’t think I was planning anything. I think I wanted to be an interpreter and work at the United Nations. I remember my mother saying, “An interpreter? Why do you want to interpret what other people have to say? Don’t you think you have some interesting things to say yourself?” [Laughs] And yeah, I guess I probably do have some interesting things to say.

MS: Why a food bank?

EL: Let’s see. One, I needed a job. I missed the messiness of life. And I missed seeing babies and grandparents. I missed the variety of life. I got a job downtown, at a little place called the Health Mart. It’s where JW Music is now. Doris Yocum was the manager there. And she said, “I don’t usually hire Dickinson students because they don’t stay. I need you to work through the summer.” I worked there for three and a half years. We’re still friends today—she lives at the Todd Memorial Home now. What a wonderful mentor she was for me. So, I worked there and got to know the people in town, the regulars who came to her store. I also did an Appalachian semester in southeastern Kentucky and an internship at the Salvation Army Senior Center. Those three things together made me realize that there was a lot to do here, that there were people suffering here and that suffering could live right beside wealth.

EL: It’s basically like investing. How do investors decide how to put their time or money into what’s going to have the greatest impact? You take the wheelchair project. You’re not only teaching people here in Carlisle or in Mount Holly new skills, you’re teaching them how they can combat the sense of entitlement that so many American  have. You’re teaching them to grow a heart of gratitude. Here’s the big thing: You’re teaching them that with their own hands, they can transform somebody  else’s life. Each of the things that I choose to do has the possibility of such great return, and it also has risk. And you can totally flop.

MS: Have you had any flops?

EL: Oh sure. And when it doesn’t work out, you just do something else. When Project SHARE started, there were times when people wouldn’t call me back or say, “Oh,  that’s not going to work.” But I learned from each setback. I always wanted Dickinson to teach a class in failure, you know? In failing forward, or failing well, because we don’t experience enough of it in a safe environment. So when we do experience it, we think it’s a character failure instead of being a part of the messiness of life.

MS: In the 30-plus years you’ve been doing this work, what do you see has changed? What has stayed the same?

EL: In the mid-80s, hunger was a big thing. Then there was a period of time that homelessness was a focus. And then there was a time that AIDS was the focus. Causes go in and out of fashion. But people are resilient. They’re much bigger than their issues. It’s like a doctor sees a pancreas, or lung cancer, or epilepsy. But you know, people are not their issue. They’re much more multidimensional. I think, really, if there is one way to help people, it’s to help them see themselves from the outside. So many of the people I work with, they seem to take on whatever happens to them as a defining moment, that it becomes a definition of them— rather than that these things happen in your life, and you work through them.

MS: How much of your work has to do with your faith?

EL: When I came to Dickinson, the Quakers were just beginning a meeting not far from the college, but I’ve been attending an Evangelical Free Church for a couple of  years now. One of the food bank’s recipients invited me to an Alpha class, so I went. He stopped going, but I kept going to the class. Anthropology made me a very  curious person, and Professor H. Wade Seaford was also a devoted Christian, one of the first Christians I really met. He didn’t press it on me, but I found it interesting. I find this idea of having all that you need so you don’t lack for anything fascinating. It gives me a sense of peace—that you can ask for peace, and receive it.

MS: Your work has had an impact on thousands of people—including Dickinsonians. A lot of Dickinson students talk about their experience working or volunteering for  Project SHARE as transformational.

EL: It’s a great privilege. I’m awed at the experiences the students bring. I’m thrilled at the diversity that’s there. I’m proud of Dickinson students when they come and  interact with other people in the community. They’re ambassadors for the entire college.

MS: At a poverty forum hosted by Dickinson last year, I was struck by something you said, that poverty isn’t necessarily about lack of money; it’s about lack of hope.

EL: Sometimes the smallest thing can give people hope. It always starts with a relationship. And so, with Project SHARE, it’s not about whatever the vehicle is. It could  be volunteering at the food bank. It could be working at PET. When Project SHARE started, I soon realized that we were giving food to people without offering them a chance to be part of something. People who are pressed down like that, you ask to come in and help give food to others. That’s how you start turning it around. You know, there’s a difference between a hope that things will change—wishful thinking—and hope like a knowing. What I’m talking about is a hope that does something, that goes places that you are scared to go to, not because no one else will, but because you know you’re equipped to.

MS: How did you know you were equipped to do these things?

EL: Because I feel God’s delight. Through each season, I have felt God’s joy and power, reminding me that I am not alone. I do not want to sleepwalk through life; I want to enjoy all that God has prepared for me.