Now There's an App for That 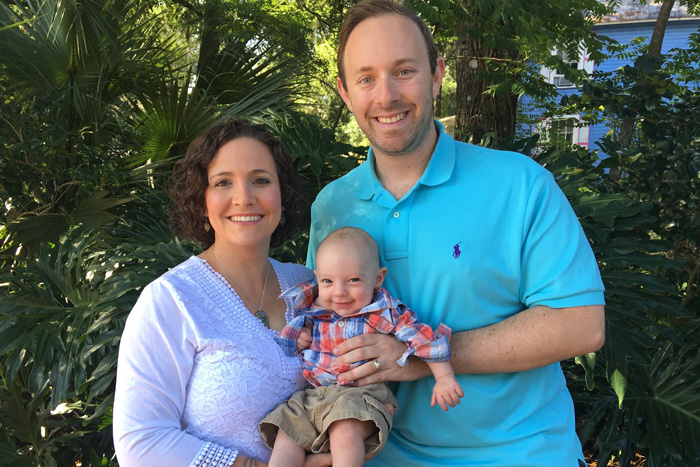 Bree Goldstein ’05 is busy. As in, most people would probably have to give up sleeping each night to keep up. The former sociology major teaches at the University of Central Florida, consults for startups and established organizations on marketing and public relations and launched her own app, UpDog, which has been described as Vine meets Instagram meets Yelp. The self-proclaimed adventurer and problem solver is also a wife, mother to a baby boy and foster mom to more than 20 special-needs dogs. Read on to see how her time as a firefighter set her on her path and why UpDog should be the next app you put on your phone.

The liberal-arts curriculum exposed me to a variety of subjects, and that has been useful in building relationships—I can find something to talk about with anyone. Whether I’m networking, at a dinner party or getting to know someone better, I’m able to contribute to the conversation in a meaningful way.

As an admissions volunteer (DAVS), I interview high school students and talk with them about Dickinson. Last year, I ran Dickinson’s table at the college fair hosted at the University of Central Florida. Meeting interested high schoolers and their parents is a great way to stay involved and spread Dickinson’s name. I’ve also donated to the college and have been back to visit a couple of times. I also follow the institution on social media and keep up with college friends that way.

My grandfather, Robert Aronson ’42, came to graduation, stood next to President [William G.] Durden [’71] and handed me my diploma. It was incredibly special for both of us. And I loved my volunteer commitments, many of which stemmed from Alpha Phi Omega’s (the coed service fraternity) call for service. I also spent 40-50 hours per week at Union Fire Company as a volunteer firefighter, which was an incredible experience that led to lifelong friendships.

How did your experiences as a firefighter lead you down the path to your career?

As a sophomore, I entered the fire service as firefighter. At the end of each fire call, the media would come over and ask, “What happened? Could this have been prevented, and how? What should we tell homeowners?”

My career in the fire service took me to Oregon, where I worked for the Forest Service as a wild land firefighter. The locals viewed the government with disdain, as an opponent who restricted their personal freedom and imposed on their privacy. Naturally, we firefighters wanted positive relations with the locals, since we often needed to drive on private roads to access remote fires. To help change perceptions, I worked with the local media to showcase the projects and training we were doing and how it could help reduce fires on private property.

In the summer of 2004, my crew was dispatched to Arizona to work on one of the largest fires in the country. One day, the information officer was missing, and since I had experience, I was told to handle the media until we had been given our assignment. At this point, it clicked. I realized that the media is one of the most powerful tools to spread a message. ... If anyone could impact thousands of people at once, it was the media.

And what did this realization lead to?

I left the fire service to pursue a graduate degree at the University of Chicago, where I studied business communications. While in Chicago, I joined the Civil Air Patrol, which is a volunteer organization auxiliary to the Air Force, and helped on domestic search and rescue missions. Again, the media wanted to know what happened and to whom. I assisted with the media for the Civil Air Patrol and did PR for the United Way of Metropolitan Chicago and the Chicago Park District.

Upon graduation, I accepted a position in public relations and marketing with an international startup. With a single checked bag, I moved to Calcutta, India, to gain a greater understanding of the culture and the company’s international operations. My position grew to include mergers and acquisitions.

Two years later, I founded Publicly Related. Since then, I have worked with large and small organizations, government agencies, a mayor’s office, a congressman, churches and nonprofits, professional sports teams, solopreneurs, inventors, businessmen and -women and entrepreneurs.

At the University of Central Florida, I taught a course on internet marketing. I knew the students gravitated toward video, grew up communicating with organizations online and expected to hear from them and appreciated honesty from big brands. The idea for UpDog was born: a simple app that enables users to use videos to share their experiences on social media, communicate with businesses and watch others’ reviews before spending time or money with a company. Now UpDog has been downloaded and used in more than 60 countries around the world.

Since graduating, I’ve had some incredible adventures that have taken me running with the bulls in Spain, diving with great white sharks in South Africa, climbing pyramids in Cairo, sand-dune boarding in Dubai, snorkeling in the Galapagos, snowshoeing in Iceland, cruising down the Danube and Yangtze rivers, skydiving in Florida and heading to Calcutta, India, with a startup.

I’ve always answered this question with “President Bill Clinton,” but I saw him two weeks ago, so now I would say Golda Meir.

I would have more rescue animals, so I could make a greater impact.