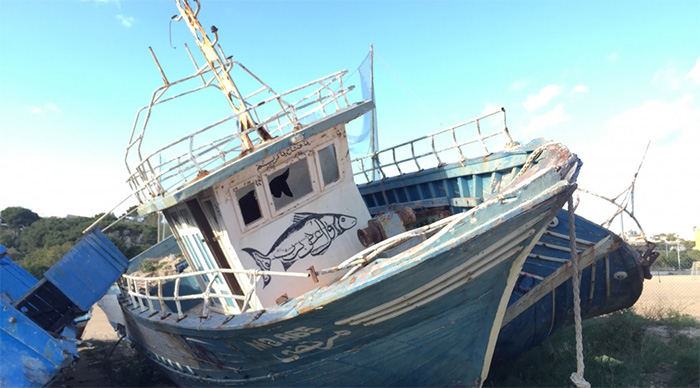 A shipwrecked boat off the shores of Lampedusa, Italy, became an icon of the refugee crisis.

When a rickety boat carrying more than 300 African migrants caught fire and capsized off the coast of Lampedusa in October 2013, it brought the plight of refugees into sharp focus. Nearly three years later, thousands of migrant lives continue to be lost to the Mediterranean Sea, and heads of state continue to debate how best to address the continuing crisis.

Dickinson students and professors looked beyond the headlines and gained a close-up view of the issue when they traveled to Italy to conduct original research as part of a course on Mediterranean migration. Their research was featured in Italian news outlets il Resto del Carlino, Trama di Terre, Prima Pagina Mazara (article and video) and Maxaro del Vallo (video).

The students had enrolled in a Mosaic, an intensive, interdisciplinary semesterlong research program at Dickinson that gives students a chance to deep-dive into a subject and conduct ethnographic fieldwork in the U.S. and/or abroad.

They began their investigations in the classroom, studying the sociopolitical events leading up to the current crisis in a history class taught by Professor of History Marcelo Borges and a sociology course led by Susan Rose, Charles A. Dana professor of sociology and director of the Community Studies Center. They also explored contemporary migration anxieties in Italy during a film class by Associate Professor of Italian and Film Studies Nicoletta Marini-Maio. And, after learning ethnographic-research techniques, it was time to take their new knowledge and skills on the road. 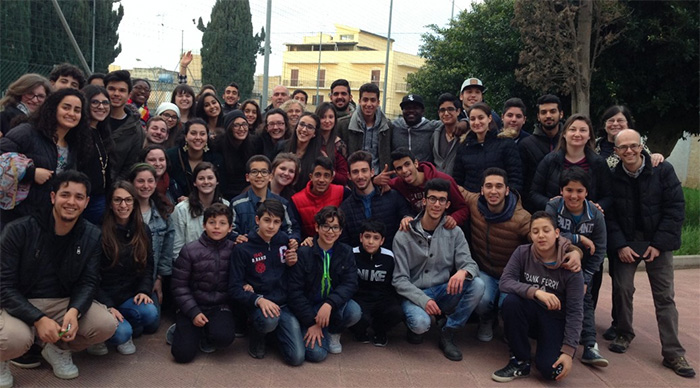 Students in the Mediterranean Migration Mosaic pose with immigrants they met and interviewed in Mazara Del Vallo, Italy.

The three-week trip began in Bologna, home to Dickinson’s Italian study-abroad center, where students interviewed two prominent leaders in the local immigrant community. During the next two weeks, they went on to visit other cities and towns with large immigrant populations from different corners of the world.

The students participated in a roundtable with heads of local immigrant organizations, attended a strike for migrant workers, broke bread with immigrant women affected by gender-based violence and interviewed migrant squatters from inside their makeshift home. They volunteered at a middle school that serves immigrant children; attended a Chinese-language mass in Prato, which has the largest Chinese community in Europe; volunteered at an afterschool program for Arab-immigrant children; and toured the Museum of Migrations, a space in Lampedusa devoted to the objects left behind by refugees.

All the while, the students conducted interviews—some scheduled in advance, some spontaneous—with refugees, government officials, religious leaders and nonprofit workers. These included the mayor of Lampedusa, a U.N. translator from Senegal, Chinese parishioners and the religious leaders who serve them, an immigrant from Morocco who was named president of the Council of Foreigners at age 21, a 22-year-old journalist from Gambia, men from sub-Saharan nations who moved to Italy during the 2011 Arab Spring, a 23-year-old student from Nigeria who left his homeland during the Boko Haram insurgency and a young boy and doctor featured in the award-winning documentary Fuocoammare.

Those interviews amounted to 504 hours of prime research material, notes Sara Johnson ’18 (sociology). And when they returned to Carlisle, the students set about transcribing, interpreting and editing that treasure trove of footage. They are currently writing papers, creating videos and building a website to highlight what they’d experienced and learned.

“Until the Mosaic, my only knowledge of Mediterranean migration was through the media, which gives a very narrow view,” said Madigan Kay ’18 (sociology, Italian studies). “Our readings in the classroom gave me a much broader and in-depth knowledge about migration, but actually going to Italy and talking with migrants or people who work with migrants made this experience much more personal, and it made me care even more about all of the work that we and others are doing.”

“It’s a uniquely Dickinson, once-in-a-lifetime experience,” added Hyla Jacobson ’18 (sociology), who created a short documentary around her research in Italy (below). “I would definitely recommend other students do a Mosaic if they get a chance.”