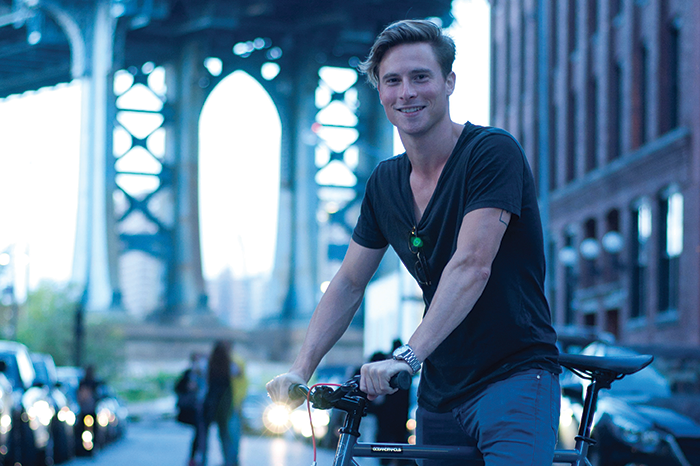 For Wyatt Lonergan ’11, co-founder and owner of Tribe Bicycle Co., the entrepreneurial path began on a run and led him into a Chinese restaurant. After graduating from Dickinson with a degree in international business & management and a concentration in Chinese, Lonergan moved to China to manage manufacturing for toy company Melissa & Doug.

“I was sourcing factories, finding factories, negotiating costs and then actively seeking new projects,” says Lonergan. As much as he was enjoying his time at Melissa & Doug, he also was searching for something more fulfilling.

“So the wheels started turning, and I wound up seeing someone on a run one day on a super colorful bike, and I was like, ‘Wow, where do I get one of those?’ ” he recalls. “I followed the guy into a restaurant. It turns out he was the chef, and I asked him where he got the bike. He gave me the contact info for the factory, and I ended up calling the factory and ordering my own bike and a bike for my roommate.”

When the bikes showed up at Lonergan’s apartment, they turned out to be pretty crummy, but it didn’t matter. In April 2014, Lonergan and his roommate returned to the U.S. and incorporated. By September of that year they sold their first bicycle, a much-improved version of that first bike.

“We’ve been operating for almost a year and a half,” Lonergan says. “We grew our collection from eight bicycles, and at the end of March we had four different product series, four different types of bicycles, about 30 different bikes.”

Tribe produces personalized bikes that cater to urban cyclists, people who use their bike for more than just recreation. The company also hosts an annual 200-300 person bike ride through Brooklyn. “It’s not your typical bike ride,” he says. “You’re getting exercise out of it, but it’s this big adventure, and you’re sharing this incredible experience with a group of people. In many ways it’s reflective of our name.”

To him, Tribe is building community around biking, and that’s the added value, the entrepreneurial spirit.