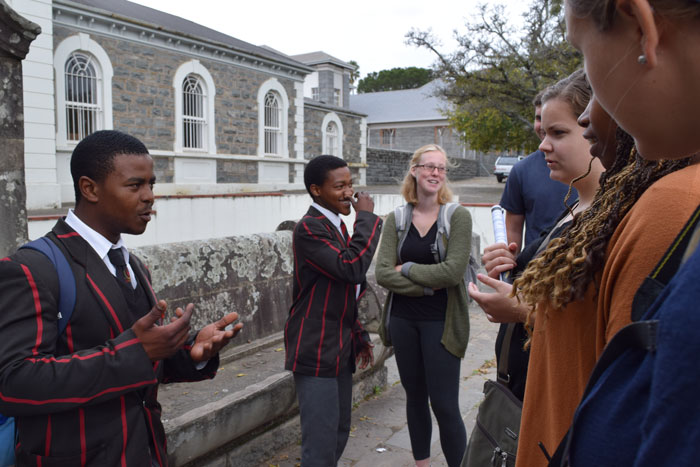 Dickinson students spent their time in South Africa getting to know the country's educational system, here through students at the Dale Boys' School in King William's Town.

In 1954, the U.S. Supreme Court case Brown v. Board of Education of Topeka set a new standard for the American education system, one that would no longer afford schools legal justification to segregate their students based on race. Forty years later, halfway around the world, the South African system of apartheid came to an end, and one result was a similar attempt to desegregate schools.

A recent interdisciplinary global Mosaic program took students into King William’s Town high schools and grammar schools, in the Eastern Cape province of South Africa, for an immersive look into the parallels, and divergences, that are emerging.

“The post-apartheid period is much shorter, obviously, than the post-Brown period,” says Sarah Bair, associate professor of education, who, along with Associate Professor of History Jeremy Ball, took students to King William’s Town. “But the students, in discussions prior to taking the coursework, were struck by the parallels between the issues around race in South Africa and in the U.S.”

Dickinson's American and global Mosaics are intensive interdisciplinary research programs focusing on ethnographic fieldwork and immersion in diverse domestic and global communities. And the South Africa Race and Education Mosaic is examining those parallels through the three weeks of fieldwork students conducted during summer 2015 and three courses this fall: Education and the Civil Rights Movement, The Rise and Fall of Apartheid and Comparative Oral Histories.

“We're going back and looking historically at how desegregation and integration have evolved and also looking at the contemporary picture and assessing where we are,” Bair says, noting that the comparative study focuses on three themes: curriculum, infrastructure and student achievement. (Students made short films about these three themes, which can be viewed on the Mosaic's blog.)

What students have found is that advances in those areas seem to be following similar paths, with mixed results. “Both countries are still facing persisting inequalities decades after Jim Crow and apartheid,” says Katie Jarman ’16 (English), who compares what she saw in King William’s Town to U.S. schools with a majority of minority students. “The legacy of the inherently unequal system of segregation means that an equal approach now to things like educational funding/spending have failed to bridge the gaps between formerly all-black and formerly all-white schools.”

In short, education in post-apartheid South Africa reflects the racial and class divisions of society, just as it does in the U.S.

“So much of the situation is driven by economics, and this is apparent in the schools,” says Ball. “The best schools tend to be either private or formerly all-white public schools that charge parents an attendance fee, and the schools with the lowest achievement are almost exclusively African schools serving the poor.”

One of the prevailing takeaways is that overcoming decades of systemic racism cannot happen overnight. But whether overnight or on a longer timeline, there is still a huge amount of work to be done in the South African system. For instance, the group discovered, through speaking with the education-reform NGO Equal Education, that there are still hundreds of schools in rural South Africa made of mud, and libraries were absent in nearly every school they visited.

“It was a reminder for me of how lucky I was to go to a school where we had all the resources we needed to be successful,” says Lucy Richman '17 (American studies). “Seeing schools without libraries, psychologists or even enough desks for all the students was a reminder that the things we have here are luxuries.”

“I was out of my element every day we were there, and it was incredibly thrilling and eye-opening,” Jarman says, going on to say that King William’s Town was as far removed from her own culture as she’d ever been. “You learn so much about yourself as well as others through your interaction with people of different backgrounds.”

John Morrow ’17 (political science) echoes Jarman in terms of being out of his element, noting that the experience changed him for life.

“I don't believe any of us had any real experience conducting oral history interviews, and we were more or less thrown into these schools and tasked with conducting interviews,” he says, citing discussions with students, teachers and administrators in schools throughout King William's Town. “It was an exciting challenge, and I think each of us will look back on the Mosaic and realize that the challenges really were invaluable experiences.”

Students stayed with local host families, and they found that the oral histories they sought to record were all around them—and daily interactions around the dinner table were often as meaningful as what they saw in the classroom.

“I loved how they connected with our host families, who were so warm and welcoming and generous,” says Ball, who took another group of students to South Africa in 2008. “South Africa is another melting-pot country, so there was a range of people, a real diversity, in the host families. Students got windows into different traditions that were all part of South African culture.”

Those windows often served as mirrors for students, as South Africans’ interest in how the American system had evolved post-segregation forced the Dickinson students to examine certain realities in the U.S.

“My host parents both have a background in education, so my informal evening discussions with them about their experiences were incredibly moving,” says Jarman, who plans on going into education after graduation. “Both of my host sisters had an idealized conception of our country’s education system and potential for social mobility, and they were equal parts comforted and disappointed when we shared recent examples of our struggles with education and race relations.”

Absorbing the contradictions became challenging for the students, but the Mosaic experience shined a light on how important it is to understand the problems with an eye toward addressing them.

“I’ve always had a passion for education,” says Nyree Addison ’17 (psychology), a native of the Bronx who says her New York City upbringing made her all too familiar with the inequalities of the U.S. education system. “And one of the memories that jumps out to me is when I went to story time in the Steve Biko Centre Children’s Library. The kids were translating the books into English so I would understand them, [and it] reassured me how important education is.”

On Tuesday, Oct. 27, at noon,  students will give presentations on their Mosaic work in the Weiss Center for the Arts, Room 235.