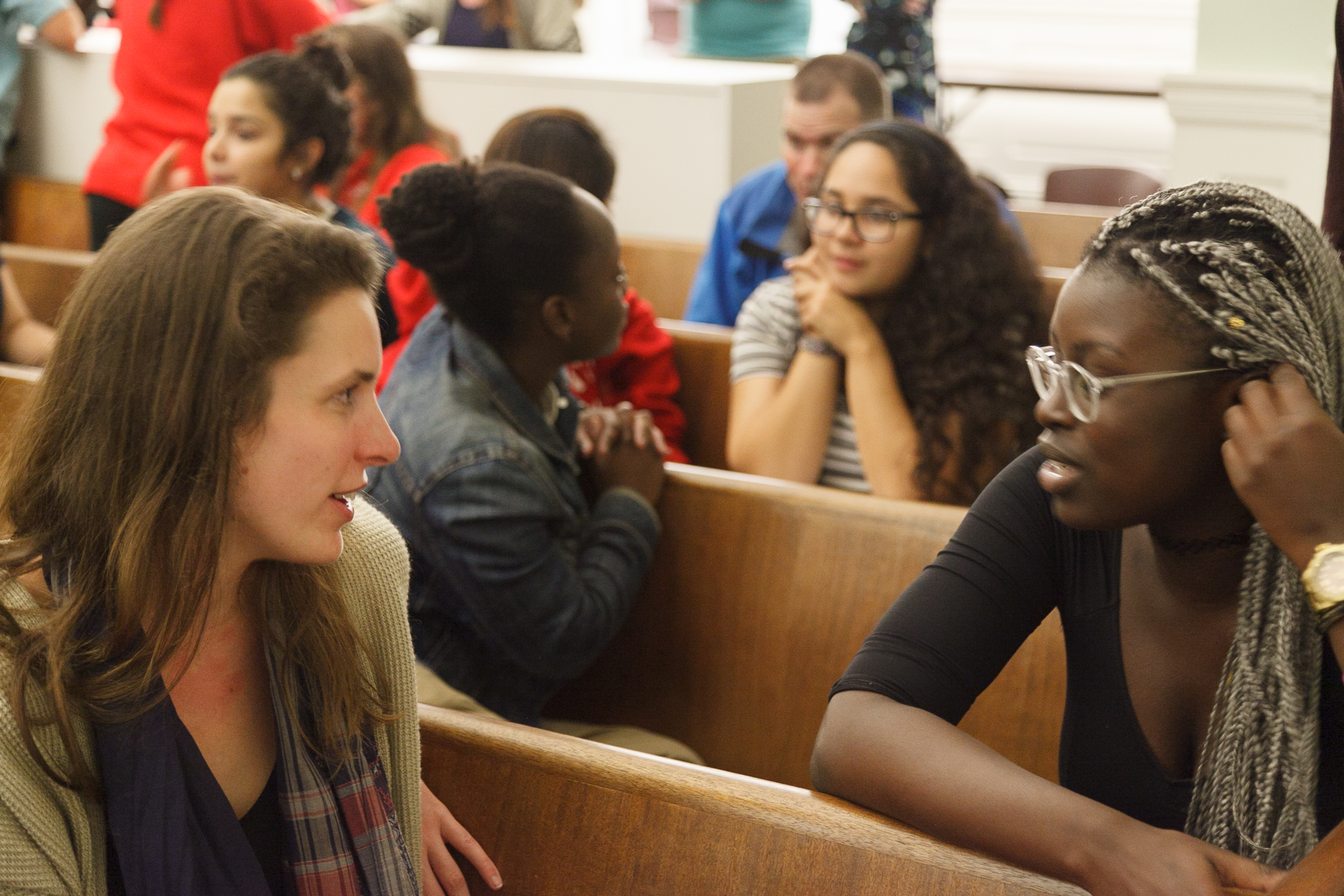 Dialogue to Action kicks off campuswide discussions around race, ethnicity and campus culture

What you do reflects how you think, and how you think is influenced by what you know. What you know depends on how deeply you listen. So what are we doing, thinking, knowing and hearing as a community? And how do we use what we learn about ourselves to strengthen the whole?

These are some of the questions posed by approximately 220 students, faculty, coaches and staff members who came together in Allison Hall to open a campuswide discussion around race, ethnicity and campus culture. The Monday-evening Dialogue to Action was the first in a series of events that aim to foster greater awareness and understanding among members of the campus community as we respond to recent events on campus and across the United States.

Organized by Vincent Stephens, director of the Popel Shaw Center for Race & Ethnicity, with Joyce Bylander, vice president and dean of student life, and Shalom Staub, associate provost of academic affairs, and publicized by members of Student Senate, the event was facilitated by Rhonda Fitzgerald of Sustained Dialogue, a nonprofit, international organization that teaches individuals and groups how to spark positive, meaningful changes in intergroup dynamics.

Fitzgerald gave an overview of what strengthening, change-inducing communication looks like within diverse communities and how we can work together to enact positive change. She then invited audience members to practice those strategies during small group discussions moderated by trained students, faculty and staff. Fitzgerald then opened the floor for a large group discussion of possible root causes and next steps, and each participant was asked to develop a personal action-item list.

The discussions centered on talking points developed three days earlier by a diverse group of student leaders in conjunction with invited faculty members and Popel Shaw Center staff; some of the themes were revisited a few days later during a Thursday evening presentation by Morgan Lecturer Patricia Hill Collins as part of the Clarke Forum for Contemporary Issues’ 2015-16 lecture series.

All who attended the Dialogue to Action event were encouraged to sign up for an ongoing series of fall events focused on recognizing and further exploring campus-specific issues, such as the need to strengthen relationships between native-U.S. and international students, or to identify structural mechanisms that foster intercultural communication and programming, such as broadened inclusivity training as part of Orientation and first-year programming. Stephens and Bylander are collecting participant feedback, which will inform the upcoming dialogues.

The ultimate goal, says Stephens, is to then build on these discussions throughout the fall and then implement an array of agreed-on solutions in the spring.