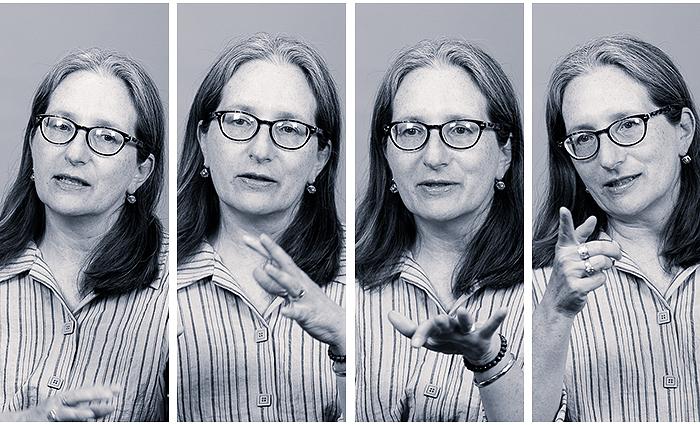 Amy Farrell, professor of American studies and women’s & gender studies and the John J. Curley '60 and Ann Conser Curley '63 Faculty Chair in the Liberal Arts, discusses her new role on campus as executive director of the Clarke Forum for Contemporary Issues, her latest research project and why her book Fat Shame resonates with so many people.

There has been a tidal wave of media attention surrounding your 2011 book Fat Shame: Stigma and the Fat Body in American Culture from appearances on The Colbert Report to interviews in The New Yorker. Why has it struck a chord?

Fat is such a big part of our culture. Everyone thinks about fat, worries about fat; everyone is affected by our $66 billion diet industry, whether we are the ones who sell the products and programs, buy them—only to be disappointed—or resist them by deleting their email ads and yelling back at the commercials. Fat Shame was one of the first academic studies that took a contrarian point of view about this fat-obsessed culture, asking about the roots of our derogatory ideas about fatness and how they allow discrimination and mistreatment of fat people to go unchecked. The book resonates with a lot of people because it explores what they already know on a very deep level—that our negative feelings about fat go far beyond any “health” concerns. Reporters contact me when they are perplexed by the uproar caused by everything from ultra-thin models to plus-size teenagers who are suspended from their schools for wearing ‘too revealing’ prom gowns that most of us would consider rather modest. I really like taking my research out into the public, explaining how our antipathy toward fatness is rooted in 19th-century ideas about the proper body and how this links to racist, sexist and classist ideas that persist today. I also love sharing the work of activists like Sonya Renee Taylor, Marilyn Wann and Linda Bacon, who are changing the way we think about beauty, body size and health.

What led to your study of fat stigma?

Dickinson students led me to this topic. I regularly taught a book titled Fasting Girls, which is a history of anorexia by the historian Joan Jacobs Brumberg. Students loved it, and their deep engagement in that book led to my decision to research and write a history of dieting. Soon after, I moved to England to teach at one of our Dickinson abroad programs, the University of East Anglia in Norwich. I was sitting in the British Library, reading one diet book after another, all from the 19th century, all repeating themselves—rice diets, vinegar diets, milk diets. I realized that these diets were endlessly recycled, so much so that I recognized versions of them that I knew about from my own childhood in the 1970s! As my interest in this tedious history waned, my fascination with fat grew. In all these dieting and health books, fat was an evil protagonist—antagonist, really—a mark of shame and primitiveness. My exploration of what fat means took me back to the history of the enslaved African woman Sara Baartman—who we also know as Venus Hottentot—to cartoons in Life magazine and early 20th-century postcards mocking fat women. It also led me to read the scientific studies about health and weight, which made me question my earlier assumption that we were in the midst of a dangerous “obesity epidemic.” Instead, I realized that our deeply rooted ideology that stigmatizes fatness actually causes us to ignore the studies that indicate that exercise and healthy eating are much more correlated to good health than weight is. I also realized that fat is what sociologist Erving Goffman would call a “discredited attribute,” and that this legitimizes discrimination against and ill treatment of fat people.

What can you tell us about your current project—a historical look at U.S. history and feminism through the lens of the Girl Scouts?

A lot of people are surprised at my new project, thinking it’s a big departure from my earlier research. It’s not really. I’ve always focused on the history of women, girls and feminism. I was drawn to researching the Girl Scouts because, despite the fact that Girl Scouts currently have 3.2 million members in the U.S. and nearly 50 million American women have been Girl Scouts some time during their lifetime, very little has been written about them. Started in 1912 by Juliette Low, who had been introduced to scouting while living in England, Girl Scouts were born during a time of heightened women’s movement activity in the U.S. My work will trace the ways Girl Scouts were part of the great historic movements and struggles of the 20th century—both of the world wars, the internment camps, the creation of a Cold War environment after World War II, the battles against segregation, the civil-rights movement and the feminist movements. Girl Scouts navigated this territory in ways far different from the Boy Scouts, who were—and are—much more conservative. And my work on fat also will have a place in this research. This fall, I’m giving a conference paper at the National Women’s Studies Association on the early 20th century Girl Scout novels—which were rather like Nancy Drew mysteries—and the role of fat girls within those stories.

In addition, you’ve taken on a new role as executive director of the Clarke Forum for Contemporary Issues. Can you give us a preview of what’s to come?

The Clarke Forum is an amazing institution on campus; started in 1994, its mission is to connect writers, artists, scholars and activists with those inside and outside the Dickinson community on issues of pressing import. I’m really looking forward to building this as a center of cultural and intellectual vibrancy, as a place where we see the significance of the liberal arts in our contemporary world. We have a great lineup of speakers and events for the fall already, from a scholar discussing the significance of shale oil extraction to Tibetan monks who will be building a Green Tara mandala as a way of raising awareness about the need to create sustainable energy sources, to the esteemed African-American scholar Patricia Hill Collins, whose talk will be part of our semester’s theme, Inequality and Mass Incarceration in the United States. Our student interns will be working closely with all our Clarke Forum visitors, and I’m very much looking forward to working with them and with Clarke Forum staff members Kim Flinchbaugh and Jolie Rankin, to increase and strengthen student engagement. I know the students will bring great new ideas to the Clarke Forum—maybe student-generated salons, in the grand tradition of the early 20th century, maybe “talk backs” after the visitors’ talks, maybe events taking the Clarke Forum “on the road,” mixing it up with community members at venues outside Dickinson!

Bacon, Linda. Health at Every Size: The Surprising Truth About Your Weight. Dallas: BenBella Books, 2010.

The Body is Not An Apology: Radical Self-Love for Everybody and Every Body.

Wann, Marilyn. Fat? So! Because You Don’t Have to Apologize For Your Size. New York: Ten Speed Press, 1998.