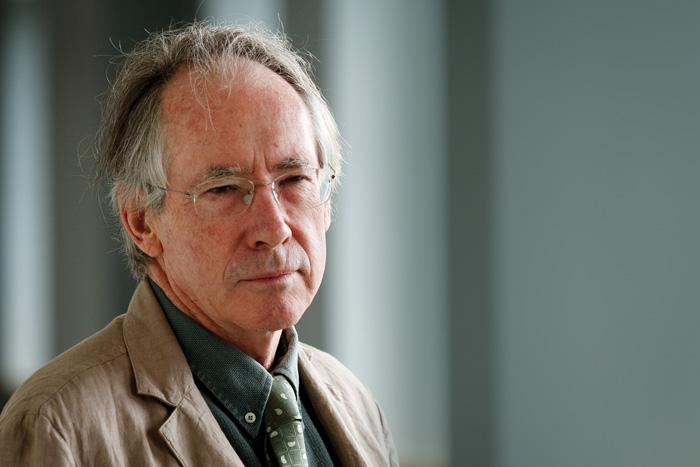 A conversation with Ian McEwan on his work, free speech and the role the Internet can play in the evolution of literature

Ian McEwan, author of such novels as Amsterdam, Enduring Love and Atonement and Dickinson’s inaugural Stellfox Award recipient, recently came to Dickinson to deliver the 2015 Commencement address. He also sat down for a conversation with writer-editor Tony Moore that touched on McEwan’s work, free speech and the role the Internet can play in the evolution of literature. Below is an edited transcript of the conversation.

Moore: In some of your books—such as The Children Act—you dig into sociocultural issues, and I’m wondering if you read about an issue and say, “This has really grabbed me, and I want to write a book about it,” or if there’s a character that has come out of your creative process and that character suddenly fits into an issue that you’re interested in.

McEwan: It’s different each time and hard to characterize or generalize about it. With The Children Act, a judge who’s a friend of mine told me about a case he’d been involved with—a Jehovah’s Witness boy refusing transfusion and the hospital urging him to do it, wanting permission from the court to override his wishes, and the judge going to the boy’s bedside. And he later heard that the boy as a young man in his 20s had needed another transfusion, refused it and died. That story struck me as being full of pathos but also full of possibility for exploring matters of law and secular [life] as opposed to religious constructions of the world and responsibility.

But other books have come completely differently, sometimes out of chance remarks. I suppose between novels, life moves on, my interests shift. I find myself reading in a certain direction, thinking about certain things and suddenly something will happen—a thought, and something I wrote will pull together what is already there on my mind. I find it useful to leave a reasonable amount of time between books for that to happen. Sometimes not writing is a really good idea. But it’s hard to say. It never feels like choosing. You don’t sit around and think, “Now is the time to do the law or now is the time to do climate change” or whatever. They grow out of your preoccupations.

Moore: And speaking of climate change, your novel Solar explores that issue. What captured your interest there, and how did you handle getting into the science of it all? Because it’s not easy stuff once you really get digging.

McEwan: Well, the science interests me anyway, so I don’t find that too difficult. It’s a matter that I’ve been thinking of since the early 1990s really. In fact, it probably goes back to even the 1970s, when there was a consensus briefly that the planet was cooling because of particulates in the air, not an unreasonable assumption, and in fact, it probably is also happening but the warming effect of greenhouse gas is greater than the cooling. Without all the particulates and pollution in the air, we’re probably heating the planet at a much faster rate. The difficulty with Solar was finding a path for a way to do it that was not too moralistic, not too caught up telling people how to think. I wasn’t writing a campaigning novel. The best books on climate change are in fact nonfiction books. So finding a lazy, greedy, intemperate creature who caught some of humankind’s most difficult aspects in their own nature was the way to do it in the end, so I ended up with a figure who largely lives in the shadow of his own past and who has that quality of great cleverness on the one hand and extraordinary stupidity on the other, and that’s what I kept witnessing in all the various global conferences. Particularly we’ve seen it in Paris, we’ve seen it in Lisbon and Rio. They all stack up behind these grand statements full of earnest wishes, and very little happens.

Moore: And with telling people how to think, I know you’ve spoken out on radical Islam and about the Charlie Hebdo attack specifically, and then the PEN American Center goes and honors those cartoonists, and some of the writers boycotted it. I’m wondering what you thought of that whole thing.

McEwan: Well, I was very sorry to hear that. This is the one country in the world where its constitutional assertions about free speech are taken very seriously. There’s hardly a written constitution in the world that doesn’t have something on free speech, and it means absolutely nothing in so many countries. There’s a very powerful culture of free speech here. Given that PEN is an organization that specifically exists to protect the rights of free speech inside that First Amendment, it was a little disappointing to me, especially from those writers roughly my age who’ve lived through the Rushdie affair. They weren’t asked to even like what Hebdo was doing; they were simply asked to honor that courage. So of course it’s a simple matter for me.

Moore: I see that the latest issue of Charlie Hebdo satirizes the PEN group on its cover, so they’re striking back.

McEwan: They had it coming.

Moore: Now, of course, every English major on campus would probably love to follow in your literary footsteps. What advice would you give—that you might not mention in your Commencement speech tomorrow—to seniors walking out the door with English degrees?

McEwan: Well, if they want to write fiction, what I always say to people is, keep it short, start your literary career tasting failure, and you can afford failure with a short story. You can devote three weeks to something that’s truly terrible. What you don’t want to do is waste three years writing a mediocre 800-page novel. You need to write  through your influences, shake off the voices or celebrate them—write with a sense of moving towards what is truly yours eventually. But to do that, you’re going to have to screw up a bit, and you can write five truly terrible short stories and you will not have lost more than six months.

Moore: The Internet seems to be much less productive than the proverbial million monkeys with typewriters. Do you see the Internet playing a role in the future of literature?

McEwan: Oh, absolutely. There are people writing consecutive, collective, manyhand novels between them, strangers collaborating across the Internet. There’s a real push, I think—and this might just be a pointless dream — but computer games are still in their adolescence, and I think they flounder in a world, a pimply teenage-boy world of car chasing and mass slaughter, but it’s not inconceivable one day that someone will write a brilliant video game that involved complex moral choices of a kind of Jane Austen type in which you investigated human nature by a set of ordeals or moral choices. Whether that will happen or not, I don’t know, but it’s at least conceivable. Just because the Internet has speeded up the level of exchange of ideas, it should in theory mean that ideas in fiction exchange themselves quicker too, but to be against all that, you know, it’s 99 percent junk, abuse, trolls, all the nastiness—but there’s so much good in it, and we can’t escape it. We’re bound to it. We’ve made this thing, and we’ve padlocked ourselves to it. There’s no choice. We could, I suppose, collectively decide that it’s wasting too much of our time, but no chance. There’s no way out. We want it, we love it, we hate it. I mean, someone said some years ago, the Internet’s morally neutral. It just has all of human nature, so everything that’s bad and everything’s that good about people is up there to be read.

Moore: When you were first starting out as a writer, what do you remember as some early victories as far as getting published, getting a little recognition, just being satisfied with yourself and what you were doing?

McEwan: One of the most exciting moments was having a story received by a truly superb American publication. It’s called American Review, and then it became the New American Review—not a very inspiring title. It was run out of Manhattan by a marvelous editor, Ted Solotaroff, now dead. For about 10 years it dominated the literary scene. It came out four times a year as a paperback book, not as a magazine. Its print run was 100,000. It made money, amazingly enough. And he started taking my short stories, and one day the latest copy came through the mail, and on the cover, which was a very bright pink, it said in white caps, “Susan Sontag, Philip Roth, Gunter Grass, Ian McEwan,” all in the same size, and I was so thrilled because these were all writers that meant a great deal to me. That kind of excitement diminishes. There comes a point when you become a professional writer and your book comes out and it might succeed, it might not—good reviews, bad reviews—and it’s something of a treadmill that you’re on with moments of pleasure and so on along the way. But at the age of 22, this was a very magical moment. I’ll never forget the thrill of that little brown package opening.

Read more from the summer 2015 issue of Dickinson Magazine.