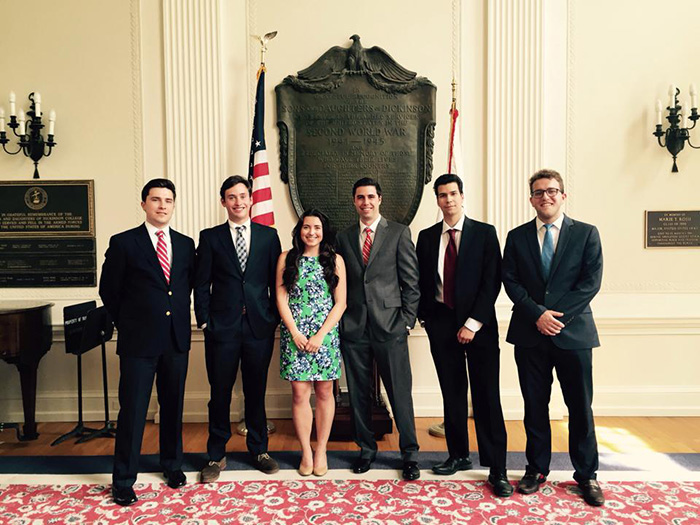 The Student Investment Group board members gather in Old West after their year-end meeting. Photo by Nick Bailey '16.

As an international business & management major with a great passion for financial markets, Nick DellaVecchia ’16 was eager to put his financial savvy to the test when he joined the Student Investment Group (SIG) during the spring of his first year. “I was the freshman who came in and thought I knew everything about the stock market, and I had a reality check,” he says with a grin. “I’ve learned a lot along the way.”

That’s a familiar scenario for members of this selective and immersive student group, which builds far-reaching career skills through simulated work experiences. And as members gathered on campus for their year-end meeting at the close of their first year as a Student Senate–recognized campus organization, they had much more to celebrate, with significant gains in both the market and their club during the 2014-15 academic year, and forecasts for a bullish year ahead.

Co-founded in 2011 by Evan Kontras ’12, Adam Volchko ’13 and Christian Mueller-Wolf ’13, SIG is an educational stock-market club, much like a fantasy sports league for the financially minded. Instead of assembling dream teams, members put together diverse virtual portfolios—drawing from regional, national and international companies that interest the group.

Each member joins one of six teams—automotive, industrial, health care, chemicals, financials and consumer goods—and, with direction from senior members, who lead as sector heads, they pick a financial trend to research throughout the year. “As you follow the trends, you start to see how different elements—like one news article—come together to affect a company’s performance,” says international business & management (IB&M) major Will Yurcik ’15, who co-led the 2014-15 SIG. “It helps you connect the dots.”

The club meets weekly in a virtual “trading room” (real-world location: Althouse). With one eye on current stock activity, each member pitches a strategy—to hold, buy, sell or short-sell the stocks in their sector, based on their latest research. The group then executes virtual trades in real time, while the stocks are moving.

“You have to think and talk fast,” says Ben Greene ’14, who served as co-president, along with Nolan Funchion ’14, during 2013-14, and now works for a brokerage firm in Connecticut, lending expertise and institutional knowledge to the group as an alumni mentor for the automotive team. “It gives you a sense of the pace of what it’s like to work in finance.”

“It’s a crash course for a lot of us who don’t have a lot of experience in technical analysis, but you learn quickly, and we’re all good about collaborating and sharing information,” says George Voris ’16, an economics major and last year’s vice president of securities analysis, who proudly notes that all major indexes in the virtual portfolio are up from last year.

Eyes on the road ahead

The club also is flourishing. A four-member organization in 2011, the group now boasts 40 active members—its membership limit, according to club rules—all with an acceptance rate of just 47 percent.

Those who make it through SIG’s several rounds of application interviews are rewarded with not only the rush of the virtual trading-room experience but also the chance to learn from more experienced peers through weekly informational sessions (co-president and IB&M major Steven Haynes ’15, for example, recently headed a workshop about hedge funds, based on what he learned during an intensive summer internship). SIG alumni, and other members of the Dickinson community who work in finance and investment banking, regularly contribute expertise via e-mail or Skype.

“SIG members are very driven and are constantly working hard to better both their technical and soft skills,” says marketing and public-relations officer Krysti Oschal ’17 (environmental studies, economics). She adds that club officers plan to partner with on- and off-campus groups to offer mock interviews and workshops in resumé building and Microsoft Excel, as well as networking and marketing skills.

The club officers also are quick to point to a more tangible asset to current and future job-seekers: SIG’s annual report detailing the virtual portfolio’s performance.

“It’s something tangible that you can take into an interview, hand to the interviewer and say, ‘This is the work I did, outside of class and in my spare time,’ ” says outgoing co-president Phil Velez ’15 (IB&M), who facilitated a partnership with the Innovation Competition at Dickinson, so senior SIG members could provide investment and general business advice to student entrepreneurs. “That can be very useful to employers, and to students. And it can help prepare you for many different roads ahead.”