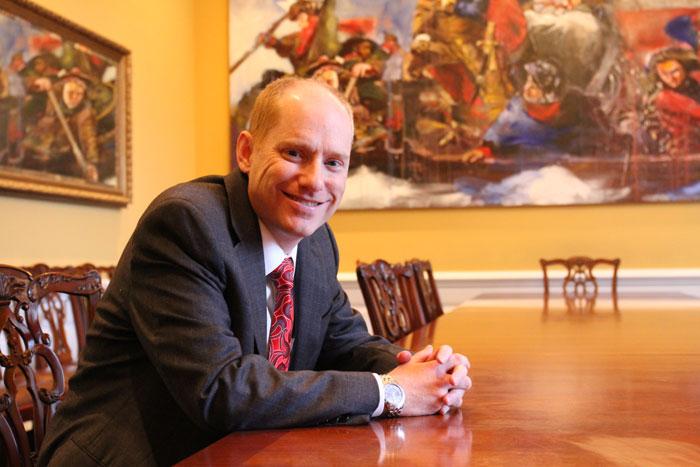 For Rob Borden ’91, working on Capitol Hill for a few years turned into the perfect lifelong career

Since graduating from Dickinson and getting his J.D. at American University, Rob Borden ’91 has lived and breathed the excitement, controversies and history of Capitol Hill for nearly 20 years, and this past July he was named director of oversight for Kevin McCarthy, the Majority Leader of the House of Representatives. After previously serving as general counsel for various House committees and as director of oversight under former Majority Leader Eric Cantor, the former political science major now advises House Republican leadership and sets oversight and investigative priorities for House committees and promotes their findings. Read on to follow his path—from Dickinson right into the Capitol building’s rotunda.

I’ve had an interest in government and politics from a young age, and, after graduating from law school, I thought it would be fun to work on Capitol Hill for a few years. Nineteen years later, I’m still working on Capitol Hill and enjoying it more than ever.

Working with brilliant colleagues on issues playing out daily in the headlines.

Professor [of Political Science Harry] Pohlman’s Constitutional Law class set me on the path to law school and eventually to what I do today, which not infrequently involves constitutional questions.

How did you choose Dickinson?

I’d been accepted at several colleges and was undecided until I came back for a visit and tour hosted by ROTC cadets. Dickinson felt like the right place to call home for the next four years after that visit.

After unwisely trying and failing at Russian, I signed up for Latin on the theory if I didn’t have to speak, it couldn’t be too hard. My theory may have been flawed, but I loved studying Latin, ancient history and classical literature. Professors Lockhart and Fitts made it seem anything but dead, and I would have majored in it had I discovered it a year earlier.

Do you have any especially fond memories, anything that really jumps out, from your time at Dickinson?

What accomplishments are you most proud of today?

Nothing compares to raising two really smart girls—14 and 17 now. A distant second is the privilege of working every day in the Capitol building. Pausing in the morning to look around the empty rotunda before tourists are allowed in or to catch the view down the Mall toward the Washington Monument is always a reminder of that privilege and the obligation that goes with it to help the members of the House best serve the American people.