In the Game: You Gotta Want It 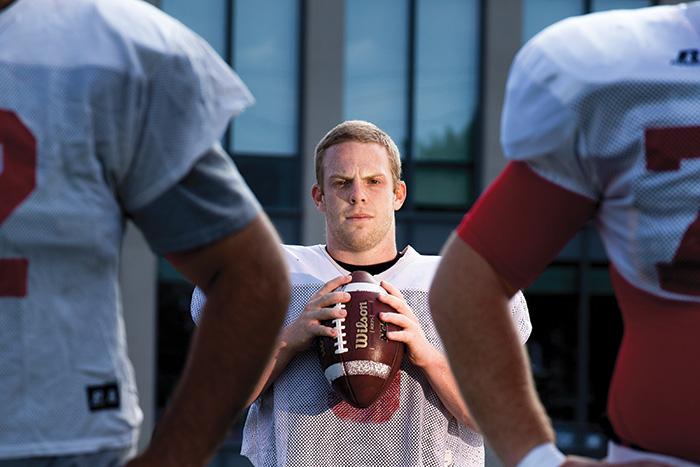 Cole Ahnell ’15 is the kind of student-athlete who will be talking football and suddenly get sidetracked by a thought he has on the economy viewed through the lens of the most recent unemployment numbers. So it’s no surprise when he says, “My main focus looking at colleges was, what’s a good academic school that has football where the coach wants me to play quarterback?”

Clearly, he found a great fit at Dickinson.

“Cole was recruited as a defensive back or slot receiver by most schools,” says Darwin Breaux, head football coach. “But his competitive nature, leadership, football IQ and athleticism made him an excellent fit for our offense.”

When Ahnell circles back from discussing the economy to football again, specifically the idea of his name appearing in the Dickinson record books, the international business & management and economics double major is way more humble than he has any right to be. “I haven’t looked at my stats,” he says. “And the way our offense is structured, it’s very diverse, in that we run the ball a lot, so my passing stats won’t be that great.”

Of course, his passing stats are pretty great: If Ahnell has just an average season this year, he could move into the top two or three in both career passing yardage and career total offense. This is all the more impressive when taking into account that he stands 5'6" in a position that increasingly sees players well over 6 feet tall.

“There’s an advantage to being able to hide behind blockers when I’m running or throwing,” he says. “The defense can’t see my release points and can’t get their hands up. Being small helps me be quicker and just hasn’t hindered me at this level.”

Breaux doesn’t see any hindrance either. “He’s an elusive runner and very effective passer,” he says. “He is a complete player and a real competitor.”

Now he’s turning that competitive spirit toward his senior year, with some specific goals in mind.

“For me the most important thing is winning,” he says, “especially the Bucket, the Wagon and the Boot.” The mention of these games against Gettysburg and Franklin & Marshall and the Centennial Conference championship, respectively, triggers a memory for Ahnell—what he refers to as his best football memory, and one that shows just what Dickinson football means to him.

“Freshman year in the Wagon, it was my first game start, and we were down 21-0 at halftime,” he begins. “We ended up coming back and winning 31-24. What really made that memory for me was seeing the elation on the seniors’ faces—seeing how badly they wanted it and how hard we fought as a team to win it.”

We already know how badly he wants it, so all he’s waiting for is the elation.

For more on the longstanding rivalry between Dickinson and Gettysburg, read the fall 2009 Dickinson Magazine story, "A Rivalry's Roots."