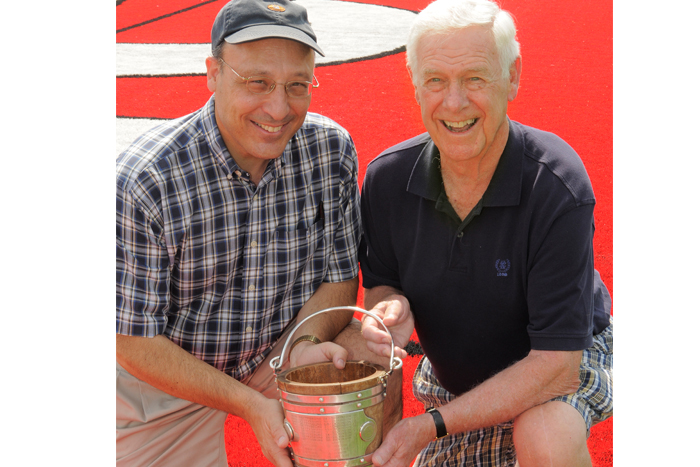 Michael Birkner and Wilbur “Goby” Gobrecht ’52 hold the coveted Little Brown Bucket. Gobrecht has literally written the book on Dickinson football. Since publishing The History of Football at Dickinson College, 1885-1969, in 1971 he has updated the book to 1986 and written histories of nearly every sport ever played at Dickinson.

Ever wonder why the campus gets more excited for the annual Gettysburg football game than the others on the schedule? If you think the excitement just goes back to the Red Devils’ rousing 29-28 victory in 2000, you’re off by a century. And if you think it’s just a result of the schools’ close proximity, you’re missing more than half the story.

According to a new book by Gettysburg history professor Michael Birkner—aided by the research of former Dickinson football, basketball and lacrosse coach Wilbur “Goby” Gobrecht ’52—the roots of the rivalry twist back to the early 1900s and feed on a deep history of ambition, envy, friendship, pride and humiliation.

“The way people feel about the games today really shows that history is alive,” says Birkner, who also consulted the Archives & Special Collections extensively to assemble Dickinson’s side of the story in Building Men: Hen Bream and the History of Gettysburg College Athletics.

Dickinson and Gettysburg met on the gridiron for the first time in 1892, appropriately splitting two games that season. But the rivalry didn’t take off until the turn of the century, says Birkner, when football became a “national craze” especially popular in Pennsylvania. With the colleges close enough for Dickinson students to tramp up to Mount Holly Springs and hop a train to Gettysburg, each student body embraced the friendly competition, which became an annual event in 1909.

Malicious feelings didn’t surface, says Birkner, until Boyd Lee Spahr, class of 1900, became Dickinson’s board of trustees chair in 1931. Driven to elevate Dickinson’s academic prestige, Spahr pushed the college to embrace a stricter spirit of athletic amateurism. Colleges then frequently hired “ringers,” who were enrolled only during football season, but in the 1930s Dickinson officially ended that practice and stopped awarding athletic scholarships.

Gettysburg, on the other hand, did not. Though their legendary head coach Henry Bream built great teams because he built great men, says Birkner, he also got some recruiting help through contributions from alumni and local boosters.

“Hen Bream had a slush fund,” says Gobrecht, who was recruited by Bream before coming to Dickinson. “If he wanted a guy bad enough, he’d go to the limit to get him. So they could get a little bit better brand of kid there to play.”

That edge sharply tipped the balance of power in the rivalry, with Gettysburg winning 12 out of 16 games from 1932 to ’53 and stirring mixed emotions at Dickinson. Some, like trustee Walter Stauffer, class of 1912—who teamed with Gettysburg trustee George Hummel to create the Little Brown Bucket tradition in 1938—valued the rivalry and credited Gettysburg’s winning ways to superior coaching. Others, like Spahr, accused Gettysburg of running an unethical program and fought to cut the Bullets out of the schedule.

“The purity of Gettysburg’s team has been open to question … [due to] some instances of paying football players,” Spahr said in a letter to Dickinson President William Edel, class of 1915, that Birkner unearthed. Claiming that Gettysburg was “inferior to Dickinson in historic background, plant, and in endowment,” Spahr said, “there is no elation to beating colleges of that type in football and it is depressing to be beaten by them as we usually are.”

This sentiment peaked following three embarrassing losses by a combined 87 points from 1951 to ’53. “That 1951 game was just humiliating,” says Gobrecht, a running back on the 1951 and 1952 teams. “We went over there, and they just kicked us all over the field.”

After 1953’s 32-0 shutout, Spahr convinced the college to drop the annual Gettysburg game, and the two schools didn’t play for more than two decades.

After Gettysburg eventually eliminated “program funds” and athletic scholarships, the two colleges returned to regular play in 1978, laying the groundwork for what would eventually become today’s Centennial Conference. Though those feelings of animosity have mellowed considerably since Spahr’s time, Birkner argues that this history of friendly competition mixed with bitter feelings of both superiority and inferiority still color the annual contest.

“History connects to the present,” he says. “Anybody who has any sense of tradition recognizes that the Gettysburg-Dickinson rivalry has some meaning greater than rivalries between Dickinson and other schools.”

Since that 25-year hiatus, Dickinson has turned the tables, winning 21 out of the last 31 contests, but if you doubt that Gettysburg’s history of dominance resonates beyond those games in the ’30s and ’50s, just ask Gobrecht if he can recall that 1978 game, when he coached the Red Devils to their first win over Gettysburg since 1937.

“I can remember it like it was yesterday,” he says, eyes flashing. “Their new head coach [Barry Streeter] came flying in here like, ‘I don’t know what the heck we’re doing playing these guys.’ He just gave you the feeling that they were so superior ... and we wiped the field with them."