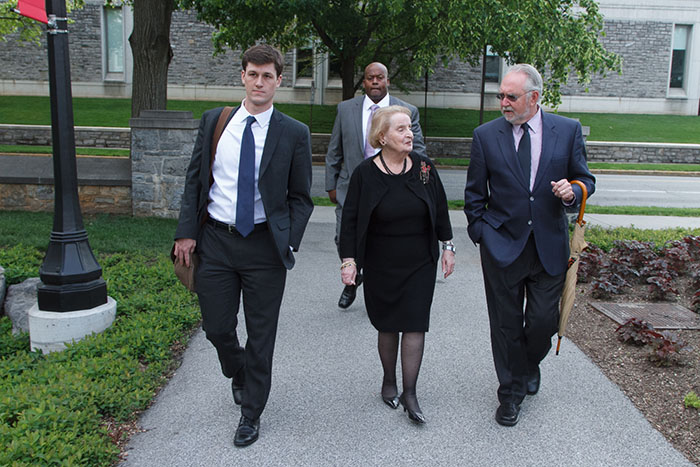 Chris Roberts '11 tackles the practicalities behind the philosophies of business, development and democracy

One of Dickinson's pillars is its commitment to global education—and the results speak for themselves. Consider Chris Roberts '11. Did he study abroad? Yes, in Cape Town, South Africa. Did he conduct research on a major global issue? Indeed, on one of the most interesting but least reported ones: Chinese investment in Africa. And does he work with global issues? Indubitably. Roberts, in his work as an associate with the consulting firm Albright Stonebridge Group, engages with the big picture and nitty-gritty of doing business in other countries and cultures. As he puts it, he works alongside the people and topics he studied in political-science classes. He also climbs rocks. And philosophizes about democracy. Read more below:

What space on campus means the most to you?

I used to spend hours at the rock wall in the Kline Center. It was a fun congregating place to spend time with friends and to work out. It was also where I developed a lifelong passion for climbing.

I stay connected primarily through the many people that I have close friendships with. Whenever I travel around the East Coast, my Dickinson friends are the first people I look up. I was also able to travel to Dickinson for former Secretary of State Madeleine Albright's 2014 Commencement address, which was a special moment for me to return to campus.

Dickinson is all about providing a "useful education," preparing students for the world beyond campus. Can you speak to how that applies to the education you received?

When I would tell many people that I was a philosophy and political science double major at a small liberal-arts school, the natural response was either, "Oh, so you want to go to law school?" or the more befuddled, "So what do you want to do with your life?" Both questions gave me a bit of trepidation before entering into the post-college job market.

Since graduating, however, I think my degree has been more useful than any other I could have chosen for my line of work. At the core of a liberal-arts education is the idea that you are never done learning, and you develop the ability to think critically to address problems in creative ways. A snazzy degree or a highly technical certification might help you get in the door, but being a critical thinker and eagerly addressing challenges is how you succeed in most roles once you get them. There is nothing more useful than someone who can teach themselves a new skill or solve the work crisis of the day.

What course(s) at Dickinson most changed your way of thinking?

I took a Free Will and Science seminar as part of my philosophy major. It addressed the cutting-edge research around brain science and how that affects our conception of autonomous, free-willed beings. I still think frequently about what we discussed in that course, and it informs my worldview significantly.

The other class was African Government and Politics, which spurred my continuing interest in the political economy of Africa and led to my decision to study abroad in Cape Town. It was also the starting point for my senior thesis about Chinese investment in Africa.

How would you describe your position now with Albright Stonebridge?

The Albright Stonebridge Group (ASG) is a global strategic-advisory firm led by Albright, former National Security Advisor Sandy Berger and former Secretary of Commerce Carlos Gutierrez. We advise and help our clients address problems in countries around the world, and we help them to understand the specific regional contexts in which they want to operate.

What I love most about my role at ASG is the interesting space in which the firm operates at the intersection of government and business, as well as the dynamic nature of my role. I serve as a member of the operations team, helping to manage our global network of partners. I assist with business-development events with leaders in business and government, and I work on client teams to help solve problems around issues from Africa to Europe. Occasionally I even get to [join the] staff with Secretary Albright at events and on travel, such as when she gave the Commencement address at Dickinson.

How did you get interested in your current line of work? Where do you hope it leads?

When I was in college I thought that I wanted to pursue international-development work in government or for a nonprofit/NGO. However, during my time working for the National Democratic Institute (NDI), a nonprofit that works to support democracy around the world, I was exposed to the important role that the private sector also plays. I think it is an interesting space to be working in—supporting companies to achieve their goals in emerging markets and helping them to do so in more responsible ways. Bringing products—whether medicine, access to financial institutions, roads and infrastructure or consumer products—is often at the center of development programs. Sometimes companies just need additional expertise, knowledge and support in those countries to navigate regulatory or political issues. Ultimately, that is good for the people of those countries as well.

What interested me most about working on democracy-promotion issues at NDI is thinking about the role of the U.S. in promoting democratic activities between elections, as well as the issue of working in semi-democratic or autocratic countries. Elections are milestone moments when the world and media focus on the democratic process, but they are only one link in the chain of a well-functioning democratic process. The nature of democracy promotion is that the most important countries to work in are also the ones where the government may not want your "help." Grappling with these strategic issues and with funding are the keys to the future of democracy-assistance work.

You just built a time machine: Where and when do you want to go?

The future! Don't you want to know how all of this turns out?