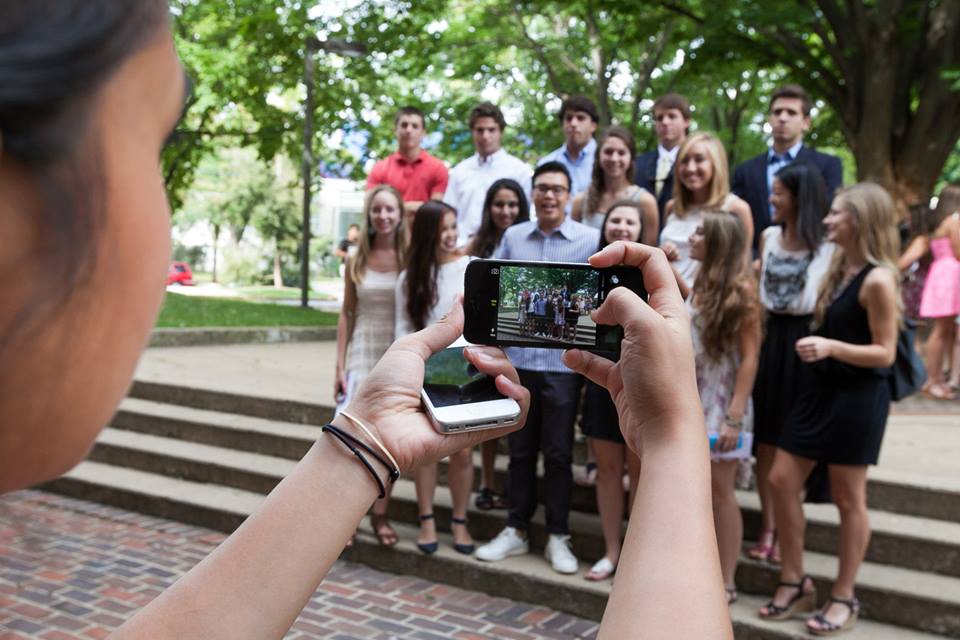 Traditions, old and new, welcome first-years into the Dickinson community

Walking in a procession toward the steps of Old West, Jordan James ’18 paused to snap a photo of the venerable building ahead. He was about to become the first member of the class of 2018 to sign the college register—a 232-year-old tradition that would mark his official entry into the Dickinson community—and he wanted to commemorate the moment.

“It’s cool to see the old signatures from 200 years ago,” he said, moments after taking the plunge, as he inspected the original college ledger, on display for the occasion. “I like the idea that we’re not doing an electronic signature. You have to actually be here to put pen to paper, just like the first class did. So you feel more connected to them.”

The sign-in ceremony capped an eventful three days for the first-years and transfers who arrived Wednesday for Orientation, and a memorable week for those who also took part in Dickinson’s optional Pre-Orientation (Pre-O) programs. New this year, the Pre-O sessions brought new students with like interests together for small-group experiences.

Steven Fitzpatrick ’18 launched his college experience with a zip-line session in the wilderness—and squelched his fear of heights in the process—while classmate Emily Sprague spent the week caving with 14 new friends. “It was a great way to meet new people and make friends for the start of my freshman year—you really get to know the people around you,” Sprague said.

“I made connections with brilliant upperclassmen and professors that I might never have otherwise,” said Courtney Gamache ’18, who took part in the Building Diversity Pre-O program. “By the second day, I already felt like I belonged at that table with all of my fellow freshmen.”

Next came Orientation. In addition to attending sessions and meeting with deans to learn the ropes of life on campus, this year all new students participated in the First Year Service Experience, giving them the chance to get to know other students while lending a hand to the local community.

“It’s been great to be a part of things, and to meet people with common interests right away,” said Christopher Trent ’18, whose new friends include first-years and upperclassmen he’s met through the baseball team and ROTC. “We haven’t had our classes yet, and we already feel like part of a community.” 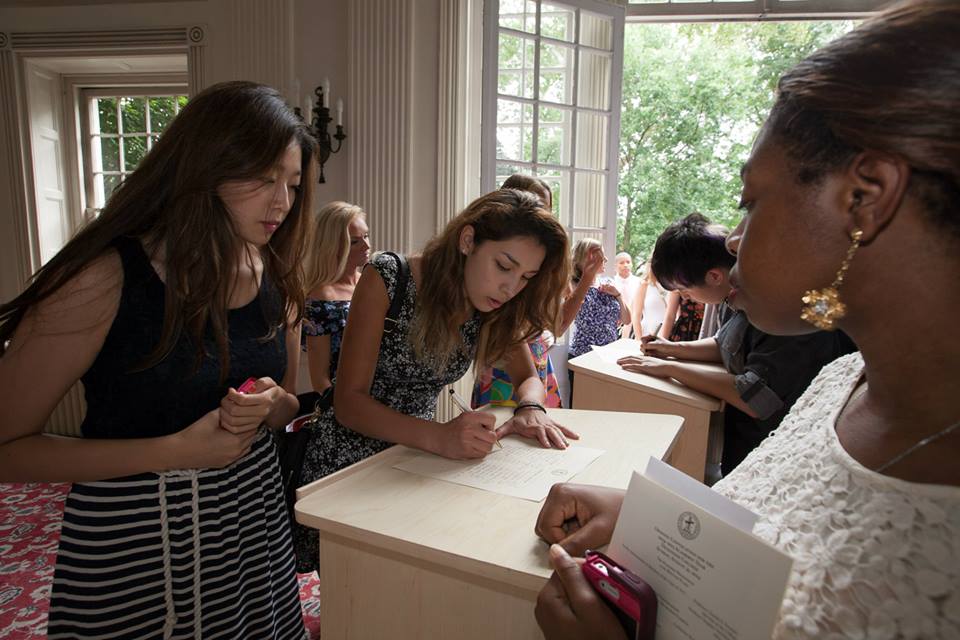 Members of the class of 2018 sign in to the college.

The week closed with an Aug. 31 Convocation ceremony, welcoming new students, faculty and staff members to the campus community and marking the official start of the new academic year. Traditionally held on the lawn in front of Old West, the college’s oldest building, it was moved indoors due to forecasted rain.

Joyce Bylander, vice president for student life, announced this year’s Shuman Prize winners, class of 2017 members Emily Vooris and Joojo Ocran, each honored for superior academic performance and outstanding contributions to the college and community. Professor of English Wendy Moffat announced the induction of seniors in the top 3 percent of the class into Phi Beta Kappa, and President Nancy Roseman presented the Howard Lane Rubendall Senior Scholarship to Krista Dionne ’15.

Student Senate President Austin Davis ’15 delivered a brief speech in which he encouraged the first-years to relish the diverse perspectives they’ll encounter, and President Roseman closed the ceremony with the Convocation Address and the ceremonial ringing of the bell.

“Your experiences will alter how you think about the world, and more importantly, how you think about yourself,” she told the students shortly before they headed over to Old West for the signing-in ceremony. “Dickinson is about to change your life.”