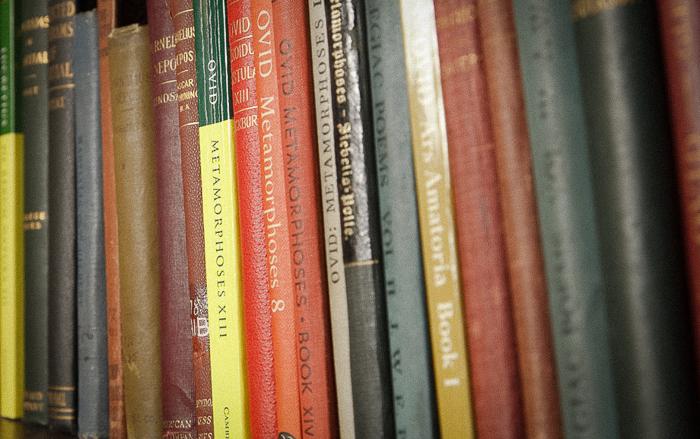 The study of Latin thrives at Dickinson

“There's no such thing as dead languages, only dormant minds.”

This is from Carlos Ruiz Zafón’s The Shadow of the Wind, and events on campus address both ends of Zafón’s sentiment head-on. With last week’s Conventiculum Dickinsoniense, running July 7-13, Dickinson hosted an immersion seminar in active Latin, moderated by two leading scholars from the University of Kentucky, Milena Minkova and Terence Tunberg.

“It is an immense privilege to have these legendary figures in the world of Latin on our campus,” said Christopher Francese, Asbury J. Clarke Professor of Classical Studies, who oversees the event’s logistics. “The most innovative and exciting teaching techniques in the world of Latin are centered on the idea of ‘active’ Latin, and they are the leading exponents of these techniques in the United States.”

Active Latin lets students and scholars use the language as a form of expression—for example, through dialogues, plays, songs, descriptions of works of art and comments on Latin texts. Conventiculum Dickinsoniense is limited to 40 attendees each year, each of whom uses only Latin all week. At the conclusion of the conference, participants leave with a better grasp of ways to absorb Latin for themselves and pass on the language to students.

But the explorations of the language didn't stop when the last Conventiculum Dickinsoniense participant left campus. July 13-19, Dickinson hosts its Summer Latin Workshop, pitched as a respite from the ordinary through study of extended texts and open sessions with Latinists and teachers. Francese moderates the workshop with Wells Hansen, assistant editor at Amphora, an annual classical studies publication.

Eager to pass on Latin to a whole new audience as well, Francese also leads (with Ashley Roman, a Latin teacher at Shippensburg High School) Dickinson’s Latin Club, which kicked off in winter 2013. With three sections for young scholars ranging from kindergarten to eighth grade, the Latin Club features fun lessons on Latin and ancient Roman culture, vocabulary and grammar.

The club’s lessons are taught weekly by teams of students from Dickinson (see video below) and Shippensburg High School and is free to join.