Dispatches From the Opera House 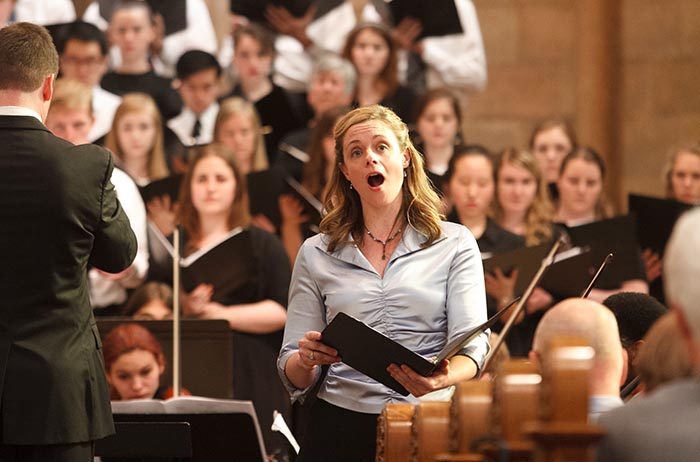 Soprano Anne Jennifer Nash '96 logged many practice and performance hours in the Rubendall Recital Hall as an undergraduate, but this time the tables were turned. The stage where she’d delivered a sparkling senior recital was now the site of a vocal master class—and Nash was the expert at the helm.

“I took a quick tour of campus last night, and the memories just flooded in,” she said, as she prepared to address a class taught by her former vocal teacher, Associate Professor of Music Lynn Helding. “The campus is the same, and it’s different—in all the best ways.”

A winner of the Aspen Music Festival Voice Competition and the Rising Star Recital Series, Nash earned a master’s degree and a performance certificate at the Peabody Conservatory and a doctor of musical arts degree at the University of Michigan. She has appeared with top opera companies across the U.S. and has been a member of the music faculty at Concordia College since 2012.

Nash came back to Central Pennsylvania 14 years ago to take part in a concert honoring Professor Emeritus Truman Bullard, an impassioned advocate of Dickinson’s music program who has taught, performed with and mentored scores of music students in recent decades, and who continues to play in the Dickinson Orchestra 14 years after his retirement. She returned to the area last week to visit her alma mater and perform one of Bullard's favorite works of music onstage with the Dickinson College Choir, Collegium and Orchestra. 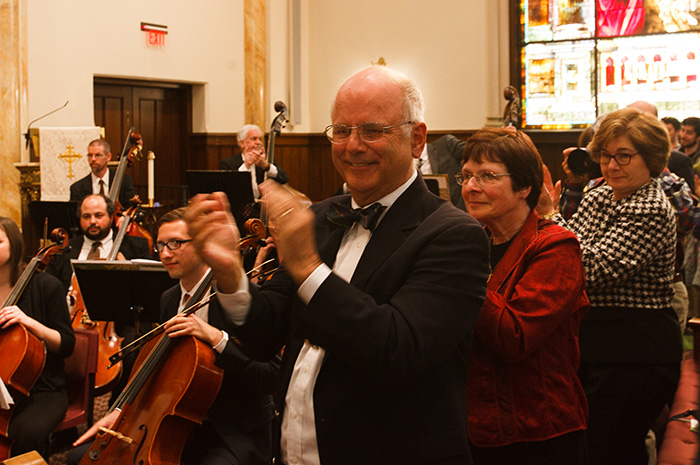 Professor Emeritus Truman Bullard delivers a standing ovation at the close of the April 27 concert. Photo by Carl Socolow '77.

Held in a nearby church, the April 27 concert of Johannes Brahms’ Ein Deutsches Requiem was a musical celebration of Bullard’s 75th birthday, and it raised funds for Bullard Music Studies Support Fund. The concert featured sparkling solos by Nash and by baritone Damian Savarino.

As they prepared for the concert amid a flurry of end-of-semester obligations, students chatted with Nash about her experiences in the opera world; many also joined her at an informal sing-along gathering for alumni, students, faculty and friends in Bullard’s Carlisle home. Students in vocal-techniques classes also attended an intensive vocal workshop with Nash.

Music major Julia Nadeau ’16 performed two songs for Nash—one in Italian and the other in English—and picked up techniques to channel energy more effectively during a performance. “I feel like I’m more focused now,” she said. “The energy is not so diffused.”

Holly Kelly ’15, a double major in music and theatre arts, plans to channel both passions in an operatic career and was inspired by the chance to meet an alumna working in her chosen field. “Having Ms. Nash there to talk about her own experiences in professional opera productions was very valuable,” Kelly said. “More than anyone else, she was able to tell us about life after Dickinson as a professional singer and what that will be like.”

Asked to describe what it’s like to return to her alma mater in a teaching context, Nash beamed. “I really feel a sense of pride that I went to school here, and pride in all of the resources Dickinson is offering to students," she said, adding that she was “blown away” by the Rubendall Recital Hall, which has been renovated since her undergrad days. “It’s clear that Dickinson values music and gives students every opportunity to succeed, and I’m glad to be able to give back a little of what I was given and to share my experiences as best I can.”