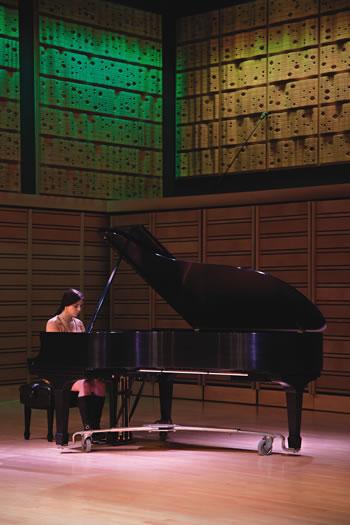 When Dieter Rollfinke arrived at Dickinson in 1964, what is now the Weiss Center for the Arts served as the college gym. In 1983, the space next to the old swimming pool became Rubendall Recital Hall, named for former president Howard “Bud” Rubendall ’31. Now, nearly 30 years later, that space has been radically transformed again.

The latest renovation in October dramatically upgrades the recital hall not only for musicians but also audience members like Rollfinke, professor emeritus of German and music enthusiast. He refers to Rubendall now as “a magnificent concert hall.”

On Rollfinke’s first visit last fall to the newly renovated Rubendall, he wasn’t sure what to expect. “At first it felt a little cold,” Rollfinke remembers, “but the minute the music started I was blown away. I never thought it would be such a difference.”

Rollfinke, one of the music department’s most devoted fans, has frequented Rubendall since his retirement in 2004. He notes that since the Rubendall renovations were officially unveiled on Oct. 11, he has seen more students attending concerts. He adds that the new performance space also has been host to more contemporary-music performances.

There is a “huge, huge difference” in sound clarity, explains Robert Pound, associate professor of music and director of the Dickinson Orchestra. Sound would “just sit” in the old hall, while the new one lends performances a clearer and more directed edge, he says. “It feels like going to a concert hall.”

Not only can the audience hear each player and note more clearly, but performers also can hear themselves better from the newly remodeled stage. And when students can hear themselves better, Pound explains, they develop a better understanding of the balance and dynamics of performance. The new Rubendall is not just an aesthetic enhancement, it’s also an important pedagogical tool, according to the composer.

Performance-studies major George Bowerman ’12 concurs. “What’s striking is the sense of control one has over the type of sounds, the colors.” Bowerman, an accomplished pianist, chose Dickinson because of the outstanding music faculty, but he was always “very aware that the space was preventing the music from being fully realized.” Notes that had been “muddy” have now achieved a new clarity of sound. Before renovation, Rubendall had not reflected the exceptional work of the department, he explains.

Bowerman also notes that the acoustics of the remodeled hall produce higher-quality recordings, vital for any student who, like Bowerman, dreams of pursuing graduate study in his instrument. An improved sound system and sound booth also enhance recording.

Both Bowerman and Pound emphasize that performers in Rubendall—from artists-in-residence to participants in monthly noonday concerts—produce a consistently high quality of work. The renovations to Rubendall give full justice to the performances.

“We now have a performance space we’re proud to show,” says Pound. Bowerman agrees: “This really says something about how seriously Dickinson takes [music] performance.”