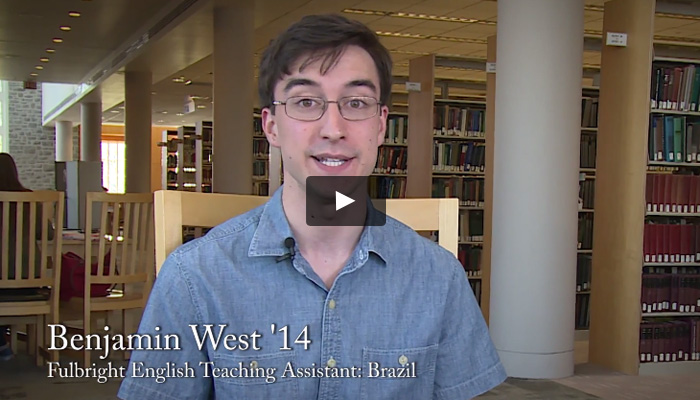 Class of 2014 members Martin de Bourmont, Kendra Haven, Peter Hechler, Chase Philpot and Benjamin West recently earned a title of great distinction when they were accepted into the U.S. government’s Fulbright Program. As “Fulbrighters,” they join an elite cadre of cultural ambassadors, each called by the U.S. Department of State to help foster greater global collaboration and understanding through international work and research.

The five Dickinson seniors were each awarded Fulbright English Teaching Assistantships (ETAs). De Bourmont will teach in Mongolia next year; Haven, in South Africa; Hechler, in Germany; Philpot, in Bulgaria; and West, in Brazil.

The awards represent Dickinson’s continued success in preparing students who qualify for the prestigious and highly competitive grants and assistantships. Last year, Dickinson was named one of the State Department's top Fulbright-producing colleges for the fifth time in 10 years. Of the 17 Dickinson students who applied for scholarly and teaching Fulbright positions this year, six were finalists.

"Our students' proficiency in languages and Dickinson's success with study abroad are the major factors that translate into such a high number of Fulbright recipients," said Sarah McGaughey, assistant professor of German and co-advisor for Dickinson’s Fulbright program, along with Associate Professor of History Jeremy Ball.