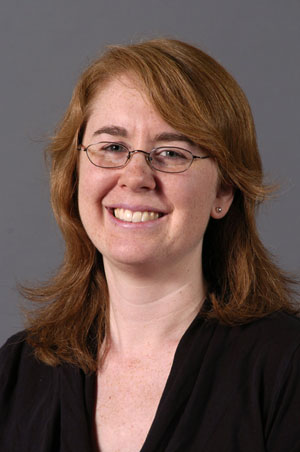 McGaughey is a scholar of modernist studies, in particular of the region of German-speaking Central Europe and of the interwar period. She focuses on the Viennese author Hermann Broch and the relationship between literature and architecture as a means of understanding modernism and modernity. She is author of "Ornament as Crisis: Architecture, Design, and Modernity in Hermann Broch's 'The Sleepwalkers'" (Northwestern UP, 2016) and a co-editor of "A Companion to the Works of Hermann Broch" (Camden House, 2019). She is also online editor of the journal for transatlantic German Studies, "Glossen" (blogs.dickinson.edu/glossen). Her current work is on the novel "Tschick" by Wolfgang Herrndorf. McGaughey enjoys teaching at all levels of the German program at Dickinson. She has developed and teaches courses on German cultural history of the environment (German Environments), German theater and radio, contemporary German literature, modern architectural history of German-speaking cultures, and "Popliteratur". She enjoys teaching German as a second language, reading and teaching contemporary German literature, and listening to and teaching with German-language pop music.

GRMN 201 Int German I:Contemp Grm Cltr
What did the Brothers Grimm do besides collecting fairy tales? How do narratives inform national identity? Why do Germans return their empty bottles to the store? Students approach such questions, which touch on language, culture, economics, geography, history, and more, through a variety of media in this course. At the same time, students review grammatical structures, expand their knowledge of stylistic forms, and practice various registers of written and spoken German. German 201 aims to develop students’ skills to understand and reflect upon German-language culture at a basic intermediate level. Classes meet four days a week. Prerequisite: 102 or 103, or permission of the instructor. This course fulfills the language graduation requirement.

GRMN 350 Contemporary German Literature
An examination of topics related to German literature or culture. Topics may include major German writers, periods of German culture, and intellectual and social movements. Prerequisite: Study in Bremen or permission of instructor.

GRMN 400 Contemporary German Literature
In this course we will study the German-language literary imagination of the 21st century. We will explore a wide range of topics in contemporary German literature such as the German unification, nature, exile and multicultural identities, remembrance, post-feminism, and contemporary myths. Readings will be chosen collaboratively by the instructor and the students. We will read some of the authors who have spent time at Dickinson. This course is taught in German.