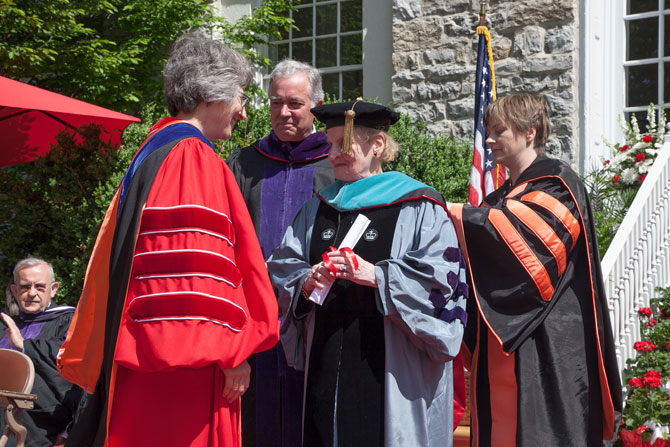 Madeleine Albright once observed that “women’s careers don’t go in straight lines. They zigzag all over the place.” The zigs and zags of Secretary Albright’s life have been truly extraordinary. An immigrant to the U.S., who arrived at the age of 11, she spent her first years trying to become, in her words, a “plain vanilla American.” But there was never anything plain vanilla about her. In 1955 she entered Wellesley College on a full scholarship, and over the next two decades she became a wife and mother while completing a masters and Ph.D. She worked under Zbigniew Brzezinski in Jimmy Carter’s administration and then accepted a teaching position at Georgetown University, where she won the award as the best professor in the School of Foreign Service four years in a row. With the arrival of the Clinton administration she was appointed the U.S. Permanent Representative to the United Nations. She soon learned why Daniel Moynihan described that institution as a “dangerous place” for an American diplomat, as she grappled with near anarchy in Somalia, “mass murder” in Rwanda, and an attempted military coup in Haiti.

In January 1997 Madeleine Albright was sworn in as Secretary of State, after having been confirmed by a vote of 99 to 0. With this appointment she became the highest ranking woman official in American history up to that time. As Secretary of State, Dr. Albright contributed her fair share to the international relations lexicon, with such memorable phrases as “indispensable nation,” “three d’s,” and “assertive multilateralism.” And yes, these will be on the test.

But Secretary Albright contributed more than rhetoric to the Clinton administration. As a person who had lived under the shadows of Hitler and Stalin, Secretary Albright brought a certain clarity, and a steely resolve, to White House deliberations over issues relating to human rights and the protection of minorities. She once commented that “I think we all know what evil is.” But as Secretary of State and as the U.S. Ambassador to the UN she was more willing than most people to call evil by its name and argue for action against it. Her message to the junta that overthrew the elected government in Haiti is typical. “You can depart voluntarily and soon, or you can depart involuntarily and soon.” It is not surprising then that she counts as one of her role models Xena the Warrior Princess.

Madeleine Albright also counts Dean Acheson as one of her role models. In her memoir she notes that Acheson “maintained a true course, relying on the mutually reinforcing tools of force and diplomacy, confident in the goodness of American leadership, and resolute in defense of democratic interests and values.” President Roseman, I can think of no better introduction to today’s Commencement speaker than the words she chose to describe her predecessor.

Madeleine Albright, upon the recommendation of the Faculty to the Board of Trustees, and by its mandamus, I confer upon you the Degree of Doctor of International Relations, honoris causa, with all the rights, privileges, and distinction thereunto appertaining, in token of which I present you with this diploma and cause you to be invested with the hood of Dickinson College appropriate to the degree.