Mission
The MANdatory program is an academic enrichment and leadership development program for male identified students of color at Dickinson including those who self-identify racially and ethnically as African-American, Asian-American, Latino, Multiracial and/or Native American. MANdatory is a gender inclusive program that welcomes agender, cisgender, and transgender men.

Rituals
Each year, in addition to weekly meetings, the men of MANdatory engage in various annual rituals including the following:

In 2015, Vincent Stephens began working at Dickinson College as the Director of the Popel Shaw Center, which included serving as MANdatory’s adviser. Under his leadership, the group has expanded the scope of its curriculum to include topics related to undergraduate research opportunities, community service, servant leadership, and preparing for graduate school. MANdatory also shifted from being a fall program to include fall and spring programming, culminating in a spring graduation ceremony. In fall 2016, Jason Rivera (Director Institutional Research) joined as a Co-Adviser.

History: A legacy of leadership
Norm Jones (former Associate VP for Diversity) founded MANdatory in fall 2010 as a resource for men of color at Dickinson College. From the beginning, the group has met weekly on Friday afternoons and Saturday mornings, to focus on student development topics related to academic enrichment and leadership development.  After completing the fall curriculum, the men of MANdatory graduated in a ceremony, open to the entire campus, held in December.  After Jones left Dickinson, Pavan Purswani (Residential Education, Shippensburg University) advised the group in an interim capacity in fall 2014.

Men of MANdatory continually build on the knowledge and skills they acquired in the group and translate these skills into campus leadership roles. Some of the achievements of MANdatory alum include making the Dean’s List (3.7 GPA +), serving as mentors for the Emerging Leaders Program, being selected to work on the Residence Life & Housing staff, leading service trips, serving as First Year Mentors for First Year Interest groups (FiGs), and receiving Latin Honors during graduation, among many others. MANdatory alumni are also inductees in such prestigious Dickinson organizations as the Order of Scroll & Key (Gray Hat Society) and the Queer Cap Society, and recipients of campus awards including the Shuman Prize (awarded to sophomores during Convocation) and Student Employee of the Year. 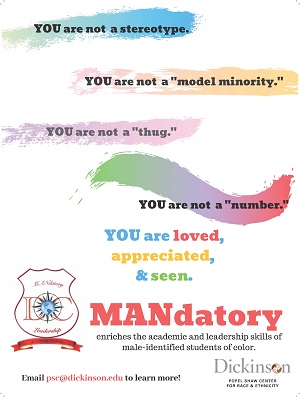