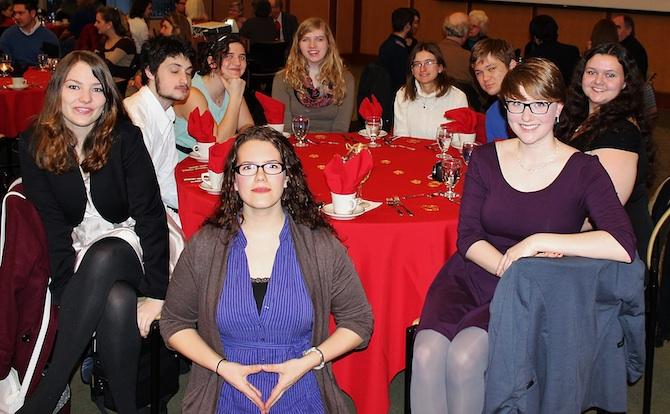 This year's event will take place on February 19, 2015 at 5:30-9PM in the HUB Social Hall. Join the German Club for an evening of delicious food!

This year Professor Mark Harman of Elizabethtown College was invited to speak, and gave a talk entitled “Kafka Imagining America.” Harman, who is a professor of German, English, and International Studies, is a prize-winning translator of Kafka. In his talk, Harman spoke about the sources and inspirations that Franz Kafka sights when writing his representation of the US in his novel, Amerika: The Missing Person. To conclude, Harman debuted a recent translation of a short story by Kafka.

Guest speaker Dr. Beverley Eddy's, Dickinson German professor emeritus, presentation on the lives of brother and sister Klaus and Erika Mann was both informative and interesting. "Danke" to German Club members and to German Club officers Gwyneth Van Son, Justin Brown, Jeffrey Lewek. And it wouldn't be a German dinner without the amazing efforts of Dining Service chefs.