This chapter was established at Dickinson College in 1962.
Please visit the national society's website to learn more about membership requirements and the honors society in general.

The insignia of Sigma Delta Pi

Sigma Delta Pi, the National Collegiate Hispanic Honor Society (La Sociedad Nacional Honoraria Hispánica) was established on November 14, 1919, at the University of California in Berkeley. Its insignia is the royal seal of Fernando and Isabel, representing Castille, León, and Aragón. The Society's colors are red and gold and its flower is the red carnation. 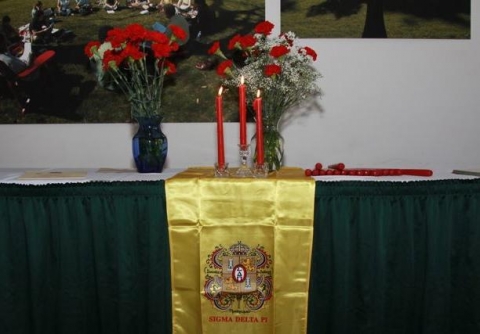 The purposes of this society are:

Active membership shall be limited to college students who have demonstrated high scholarship in general and excellence in the academic study of Spanish. Specifically, they must meet the following requirements:

Sigma Delta Pi does not discriminate on the basis of race, color, national or ethnic origin, sex, age, or disability.