From Motorhead to Mozart 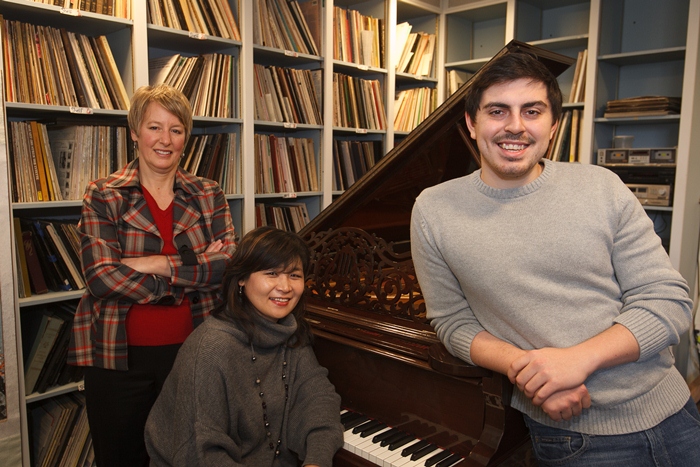 Each week, Schlick works with his voice teacher, Lynn Helding (left), and Eun Ae Baik-Kim, his music coach, to hone his craft. Photo by Carl Socolow '77.

It should come as no surprise that Frederick Schlick '14, an aspiring opera singer, was exposed to music at a young age.

"My father got me into heavy metal when I was a kid," the music major says, "so I've listened to Metallica and Motorhead. I'm very well-versed in the art." And then he laughs a little, because leaving the headbangers far behind, these days Schlick instead embraces the likes of Mozart and Benjamin Britten.

Schlick is coming off winning a recent National Association of Teachers of Singers (NATS) competition (his second victory), and his continuing success is explained in the punch line to the old joke about how someone gets to Carnegie Hall: practice. "With opera in particular, you're building a muscle," Schlick says. "It's not, 'Oh, I can sing.' It's more like Olympic-style singing, with all the training. At first it's 'Can I do it?' and then you get through that and move on to building it up."

Besides a weekly session with his voice teacher, Associate Professor of Music Lynn Helding, Schlick's training includes a weekly music-coaching session with Eun Ae Baik-Kim, Dickinson's collaborative pianist and instructor in piano, and an hour and a half of daily practice. Of course, none of this would be enough if it weren't for the natural talent underneath it all.

"It's a little like athletics," says Helding. "When you look at body types, you might say, 'This person is meant to be a sprinter,' or 'This person was born to play basketball.' It's the same in voice." Schlick was built to sing, and Helding thinks he's found a perfect match in his beloved Mozart.

"Mozart makes a singer out of you," Helding says. "There is no room for error: You have to have perfect intonation, perfect pitch. You have to really be able to sing a clear, clean line in tune to sing Mozart well, which [Schlick] does, with an unusual maturity."

Now that Schlick is reaching the end of his time at Dickinson, he's applying to graduate school, where he'll study opera performance. "He stands a very good chance of having an operatic career," Helding says, "which you can't say for everyone."

Unlike sprinters and basketball players, though, the best opera singers usually aren't in their early 20s.

"With the opera trajectory, my voice won't mature for another eight years," Schlick says, "so I don't see myself on a grand opera stage for another 10, 15, even 20 years. What I want to do is opera theatre. There's not a whole lot of money in it, but it's a beautiful thing."